Sonar and an Article on Cruise Loch Ness

I spotted this on the Daily Telegraph, but I think it is only available to subscribers, so here is an insight into how the Loch Ness cruise boat industry works. I went on the new Cruise Loch Ness boat last April and it was an enjoyable and interesting experience, but more on that at the end of this article. 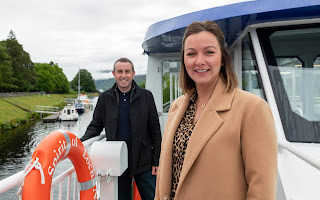 Not every small business owner can say they offer customers a chance to get up close and personal with a legendary monster, but Debi Mackenzie can. For more than 50 years, her tour company Cruise Loch Ness has ferried curious clients back and forth across Scotland's second-deepest loch. Most come to learn about the region's history and geology, but in the back of their minds is always Nessie, she explains. "There's no getting away from it – people are mystified by the creature!"

Based in Fort Augustus, a "quaint little village" on the banks of the loch's southernmost point, the family-run firm offers a range of scenic and exhilarating tours. Its standard offering is a 50-minute cruise that runs several times a day to Invermoriston and back, while more adventurous travellers can take a rigid-hulled inflatable boat (RIB) to Foyers, Urquhart Castle and beyond at high speed.

"We try to cater for all ages and budgets," says Mackenzie, who thinks that her company's key differentiator is its local workforce. "Our staff are well versed and very passionate about the place, as most have lived here all their lives." The director isn't local; she used to work in banking in Glasgow. In 2010, a mutual friend introduced Mackenzie to her now husband Ronald, the owner of Cruise Loch Ness. His father Norman launched the enterprise with a second-hand lifeboat in 1968.

The couple began dating, but living a three-and-a-half-hour drive apart proved tough. "One of us had to move, but Loch Ness is Loch Ness and we couldn't shift that," jokes Mackenzie, who relocated to Fort Augustus in 2012 and took a job with a local bank. "This was about the time the business began to take off and Ronald was working really hard on it, doing pretty much everything himself."

He asked his partner if she wanted to come aboard. "He expected me to say no, but I loved rural life," she says. "I wanted to see what we could do together to make the company even better." Ronald's time was mostly spent working on the boats, which meant that the back office suffered. Mackenzie used her banking expertise to introduce new finance and administration processes. "Everything became streamlined," she says. A new website and bespoke booking system brought even more efficiency and a better customer experience. Business increased by about 20pc each year after that point, she claims.

The family slowly but surely grew its fleet of boats to meet demand, but by 2017, a much larger passenger vessel was needed. With nothing suitable second-hand, the Mackenzies commissioned a new build. It was "stressful" and a "huge risk", admits the director. "When you're a home-based business working from laptops, you don't expect to spend £1.5m on your next piece of kit."

The custom craft, Spirit of Loch Ness, was launched last year and brought capacity across the company's five boats to more than 350 people. Word of mouth marketing, local tour operator partnerships and a new social media strategy have all helped to keep bookings high.

With nine award wins over the past year (including being crowned small firm of the year at the recent Federation of Small Businesses Awards), things are looking up for the enterprise, which employs 18 people in peak season and has an annual turnover of £1.6m. But Mackenzie and her team aren't getting comfortable. "We're always worrying about keeping things attractive so that people want to come," she says. The remoteness of Loch Ness can be a challenge. "It's a popular tourist destination but still in the middle of nowhere," she states. "With rising fuel costs and so on, people don't always make the effort to come that bit further north."

Winter trips can also be a difficult sell. "The village is so quiet and quite a few shops are closed," says the director. "It can be hard to get tourists to the village when it doesn't offer as much as it does in the summer." Fort Augustus being so isolated also makes it tough to attract talent, but Cruise Loch Ness is "lucky" in that it employs so many locals. "We're family," says Mackenzie. "Ronald grew up with most of them, which can present challenges now that he's their boss, but there's also a lot more respect."

The secret to keeping staff happy is simply to look after them, she thinks. "Pay them well and listen to their concerns." Her advice is to hire people who are as passionate about the business as you. "Our employees give the same tour presentation seven or eight times a day, but they do it consistently well because they really care about the company."

Having family members running the firm means there will always be passionate and dedicated people leading it, but working and living together can be hard. "It can feel like it's 24-7," says Mackenzie, who has two young children with Ronald. To fit everything in, they're often up at 6am writing emails, which can be physically and mentally taxing.

The flip side, however, is that the highs are much higher. "Being able to celebrate the wins together as a family at the dinner table is really nice." Cruise Loch Ness will soon open a new booking office, which will "transform" how the team works. "Ronald and I will have an on-site office space and a person purely focused on admin," says Mackenzie. "It's going to make a big difference." Two new RIBs are also on order. "There's going to be a lot of shiny new boats."

Could the future also hold a new sighting of Nessie? Mackenzie isn't sure, but adds that stranger things have happened. "A few years ago, one of our skippers captured an image of a large object on his sonar device screen," she explains. "It was quite deep below the water and a few metres in length, which is very unusual."

She is of course referring to Marcus Atkinson's 2012 sonar contact, but going back to my own recent experience of the boat, I do take a somewhat contrary position in watching the sonar screens more than the waters outside. According to one of the older staff I spoke to, the boats have had about 600 sonar contacts over 10 years, most of those which were GPS tagged and when revisited were gone.

One crew member said he had once seen a sonar contact on the screen which required his thumb to cover it. What that quite meant in terms of the physical dimensions of the corresponding object under the waves is another matter, but as I watched the screen, I did spot my own sonar blob which aroused my curiosity. You can see it in the photograph below as the blue dot just above the loch bed above the "6" of "64.0". 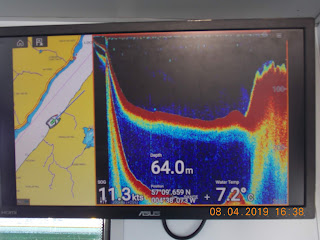 The depth would be about 140m (460ft) going by the vertical scale on the right. You can see the smaller dots representing fish near the surface, but this blob is somewhat bigger, but not hugely. Though it has to be remembered sonar images denote changes in density and not physical size. So what was it? A seal (unlikely since they are not indigenous), a salmon kelt, ferox trout or something else?

The route did not allow to check whether it was still there on the way back, that would require paying for another trip and going over the same spot.  However, one sonar contact of interest roughly every week on average since 2009 makes one wonder what other cruise boats are seeing on their boats? The aforementioned 2012 sonar contact may have comparable ones which have received little or no publicity (such as this one). It would be good if they were made available for examination and discussion.

The author can be contacted at lochnesskelpie@gmail.com
Posted by Glasgow Boy at 04:59 16 comments: