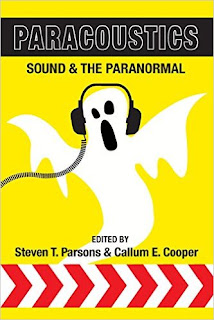 In a previous post, I had looked at a theory proposed by Loch Ness researcher, Dick Raynor. This concerned the idea that infrasound emissions from resonating pipes below the roads around Loch Ness may have physiological and psychological effects on people around the loch. The implication being that this could partly explain reports of monsters in the loch.

It was also suggested that this resonant frequency of about 19Hz was also the resonant frequency of the human eyeball, causing it to vibrate and disturb peripheral vision. This was seen as having an effect on what people saw in the loch. The theory was also applied to other strange phenomena including even Bigfoot sightings.

As a postscript to all this, I was at a recent meeting of the Edinburgh Fortean Society where the subject of "paracoustics" or the link between infrasound and the paranormal was discussed by Steve Parsons who has just published a book on the subject.

All this began with Vic Tandy who claimed he felt and even saw strange phenomena when in an environment resonating at 19Hz. The route to the conclusion was based on an experience at his workplace and the story of his fencing sword resonating at this frequency.

As it turns out, Steve told us that the 19Hz story was misconstrued. Fencing swords do not resonate at 19Hz, more like ten times that frequency and Tandy's measurements turned out to be suspect as he had not taken the entire dimensions of the room into account when calculating the alleged frequency. Indeed, the environment around us is already filled with infrasonic waves and it is not unexpected to find 19Hz amongst a range of frequencies across the infrasonic spectrum.

The idea that the human eyeball resonates at 19Hz is also suspect. The background to the story came from NASA stress tests on astronauts. But the energy levels involved in this test were huge in order to mimic astronauts sitting on top of a Saturn V rocket, not driving over a roadside pipe! NASA were simply testing if astronauts could still see the dials on a control panel as their entire body was shaken in simulations of a rocket launch. Indeed, it turned out different shaped eyeballs have a range of resonant frequencies.

In other words, this has no relevance to Loch Ness, as does the idea that 19Hz is relevant to the Loch Ness Monster (Steve Parsons confirmed that paracoustic theories are not primarily visual based theories).

But this does not mean infrasound or even ultrasound are irrelevant to paranormal research. It is just that this narrow band around 19Hz can be safely discarded as being important. Whether other frequency ranges can affect human perception is an ongoing subject, but until something more solid and beyond the realm of speculation turns up, it is irrelevant to the Loch Ness Monster.


So what is the conclusion of all this? The role of infrasound on the Loch Ness Monster mystery is at best an interesting item of idle speculation and at worst another example of sceptical pseudoscience (or McScience as it is sometimes referred to).