The Mystery of the Three Toed Cast 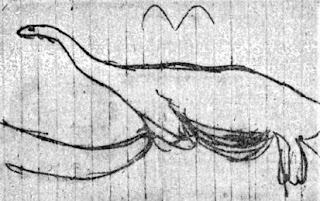 In a previous post, I went over a 1934 sceptical appraisal of the then new Loch Ness Monster phenomenon. There was an excerpt from that article which I held back for this piece concerning the Arthur Grant land sighting:


The Daily Mail, with customary enterprise, sent investigators. These included a big-game hunter. who eventually found two impressions of a large foot upon the shore. Photographs and a cast of these were submitted to the museum, where the impressions were found to have been made on a heaped-up bank of fine shingle with the help of a stuffed foot of a hippopotamus. A wag had been busy - had he used a living hippopotamus the impression would have been different and the big game hunter would not have been deceived.

On the other side of the loch the animal which bounded across the road, described above, left a trail. In that trail was an obscure footprint of which a cast was also made. At the museum it was found that this footprint was also the work of a joker - but this time he used the mounted foot of a rhinoceros.

Now I covered the matter of the Arthur Grant case and tracks found on the shore in my book, "When Monsters Come Ashore". Until recently I was aware of these "rhinoceros" tracks that had been found, but I did not connect them with the Grant story and assumed they were related to the Marmaduke Wetherell tracks found on the remote shoreline between Foyers and Fort Augustus. The plaster casts  taken from the Grant site were sent again to the Natural History Museum, but now it transpires these were identified as rhinoceros as opposed to the infamous "hippo" tracks which were created using Wetherell's ashtray. 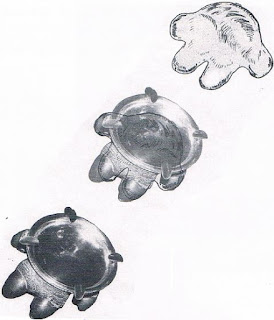 The question before us is whether these tracks were another Wetherell hoax or something entirely different? The main point being that a hippopotamus is four toed as opposed to the rhinoceros which is three toed, therefore it is unlikely that Marmaduke Wetherell's four toed ashtray would have produced such a three toed track. Indeed, if one examines the sketch done by Arthur Grant at the top of this page, there is a hint of a three toed rear limb in the bottom right of the picture.

What could be going on here? In pursuit of an answer, I consulted Boyd and Martin's expose of the Surgeon's Photograph which goes into more detail than any on the matter of Marmaduke Wetherell and the fake spoors. Firstly it has to be noted that the authors are dubious of any land sightings when on page 31 we have this general quote: "Alleged land sightings must be regarded with some doubt."

Bearing that in mind, it is no surprise that doubt is then cast by them on the whole affair by suggesting that Grant and Wetherell colluded to produce a sensational story, tracks and all. No proof is produced for this opinion other than the alleged phone call Grant is said to have made to parties unknown at that time - an accusation which has its own problems and is covered in my book on land sightings. Laying that aside, the proposed scenario would have Wetherell producing yet more tracks to fool the Daily Mail and the general public.

The sequence of events may even be used in support of such a conspiracy theory when we consider that the Natural History Museum announced their analysis of the hippo plaster casts on Wednesday the 3rd January 1934, the story made the newspapers on the 4th January and the Grant sighting occurred the very next day on Friday the 5th. Was this sequence of events designed to deceive? There are some problems with this conspiracy theory.

Firstly, why would Marmaduke Wetherell even do such a thing? The Natural History Museum had correctly identified the species of the first set of tracks and rightly put it down to a hoaxer. If Wetherell employed some form of rhinoceros spoor, the result was going to be inevitable when the second plaster casts arrived in South Kensington, London. Why risk a second embarrassment to your reputation as a big game hunter and cause further irritation to your client, the Daily Mail?

Secondly, if for whatever reason, Wetherell decided upon the January 3rd declaration by the Museum that yet another hoax was required, he had little time to organise it. It would demand that a co-conspirator be found and a location, plan and setting of fake tracks be done by the early hours of the 5th giving a day and a half or 36 hours in total. There is no evidence Wetherell and Grant had met before the 5th of January, none at all and so the whole idea really boils down to not empirical evidence, but whether one's bias wishes the whole theory to be true or not.

Thirdly, there is no evidence that Marmaduke Wetherell even owned such a rhinoceros foot. I contacted Marmaduke's grandson, who featured in Boyd and Martin's book and asked him if he recalled his grandfather ever owning such an item. His reply was that he only recalled the hippo foot ashtray. So, on the face of it, Marmaduke Wetherell had nothing to produce his three toed tracks with.

Now it has to be pointed out that Wetherell got away with his fake hippo tracks by hiding the hoax tool in plain sight. Marmaduke was a chain smoker and it would be natural to bring along his hippo foot ashtray while he was at the loch investigating the monster. It was a perfectly innocent item put to a more sinister use and one can only carry so many items around without arousing suspicion. So, in the absence of compelling evidence, let us assume that Marmaduke Wetherell had nothing to do with the creation of these tracks.

Indeed, it transpires that another set of three toed tracks were found days before the Grant affair but before the public announcement from the Natural History Museum. The relevant text is from the Edinburgh Evening News, 1st January 1934 which is reproduced below. 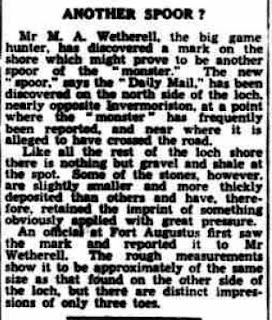 The story here is that after the discovery of Wetherell's four toed tracks, a discovery was made of what appeared to be three toed tracks on the opposite side of the loch. Where this exactly happened is not clear, but my guess is somewhere south of Invermoriston. This is also stated as a location near where the creature is alleged "to have crossed the road". Quite what report this is referring to is also not clear to me.

I have no record of land sightings in that vicinity in the months leading up to the end of 1933. The nearest in time was a report by a Mrs Reid in December, but this happened on the other side of the loch. The nearest by location was by a David Stewart back in May of that year just up the road by the Altsigh Burn who saw a grey coloured creature with a long neck come out of the bushes and disappear into the loch.

But the main point is that another three toed incident happened almost a week before Arthur Grant had his encounter and this was reported as discovered, not by Wetherell, but by a Fort Augustus "official". Should we presume that Wetherell was the instigator of not one but three hoaxes? I think that would indeed be presumptuous as the probability of conspiracy decreases as the size of the conspiracy increases.

As an aside, some looking to tar and feather Nessie personalities old and new may suggest the unknown Fort Augustus official was Alex Campbell. After all, he lived in Fort Augustus, as water bailiff he was a government employee and (as they claim), he was up for a bit of hoaxing. Needless to say, there is not a shred of evidence for this theory. Various other people could be officials (canal managers, police and local politicians) and in my years of scouring the literature, I have never read of Campbell relating this story.

So, are these tracks the real deal?

Of course, there is no way of telling for sure. Others may invoke Grant as the sole perpetrator or some other unknown third party, it is pure speculation and I think I will join in this speculation party but take the opposing side. What does a rhinoceros spoor actually look like? The zoologist does not say what type of rhino they decided upon, so I will assume the most common species of rhino which is the White Rhinoceros of Africa. A look around Google Images gave this example track and it is stated that a typical track is 29cm by 28cm in dimensions. 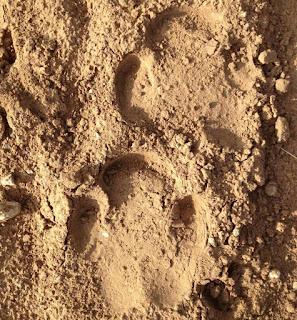 Clearly these look quite different to the hippo spoor from across the loch shown above. The problem is we do not precisely know what those 1934 plaster casts looked like and so we can only go with the museum's closest approximation to the white rhino. I would also note another mystery in that the second group to visit the site led by A.F. Hay measured the tracks at 24 inches (61cm) long from toe to heel, 38 inches (96cm) cross from right toe to left, and 30 inches (76cm) from heel to heel which is more than double the normal dimensions of a rhino track! So what gives here? Did the Museum err too much on the the assumption this was another game animal or did Hay over-estimate the size of the tracks or were these different but better formed tracks from the site? I suspect the answer lies somewhere in the middle.

I would note that a three toed track is not something unique to this story. In fact of the eleven land accounts that describe the forelimbs, two (18%) mention three toes and these are E.H. Bright from 1880 and Donald MacKinnon from 1979. Other instances of three toad tracks have been claimed elsewhere in the lake monster literature. These include a Robert Duff at Loch Morar on the 8th July 1969 as well as one found at Lake Okanagan (as related by Mark Chorvinsky).

To this we can add the 1948 tracks in the River Nith in Ontario (Lake Monsters and Sea Monsters - An Atlas and History), Huilla of Trinidad and Tobago (in "Water Monsters South of the Border"), Lake Tarpon (People Are Seeing Something), the Natal coast and White River (both in Dragons by Richard Freeman). However, one must not discount hoaxes, such as the Florida case related here.

It was probably a futile gesture since many monster hunters before me must have tried to track down these plaster casts without any apparent success. But I emailed the Natural History Museum archives department and they confirmed that they had no such items. That is no surprise as I assumed they would be returned to the owners. That Marmaduke Wetherell owned and then discarded the hippo casts once they had fulfilled their purpose is one likely outcome. But if the "rhino" tracks were not Wetherell fakes, how would they have been treated and by whom?

Plaster casts from the 1930s can easily survive to this day with proper storage, but frustratingly and nearly 85 years on, this potentially unique cast of the Loch Ness Monster is not likely to be with us today. Perhaps the answer lies with Arthur Grant's descendants.

I end this piece with a delightful poem penned by "glorat" extolling the mystery of the three toed monster, which was published in the Falkirk Herald dated 17th March 1934. 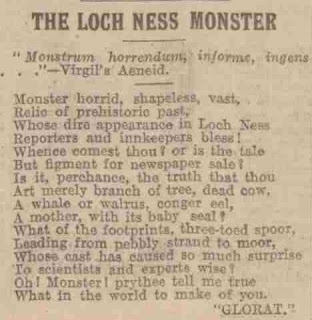