Loch Ness researcher, Dick Raynor, posted this on his YouTube account a few days ago. He entitles it "Sonar Anomaly recorded on Castle Cruises tour boat at Urquhart Castle". The anomaly appears towards the end of the scan and the readings suggest it covers about 90 feet in the water but what it could be is open to interpretation. Dick offers no explanation for it on the YouTube page and I don't know if he rescanned the location to see if it was still there or if he has seen similar objects before.

I found this old tale of a Water Horse from the island of Skye in my notes. I don't think it made it into my book, "The Water Horses of Loch Ness", so I include it here. It is taken from the 1905 book, "Misty Isle of Skye" by J. A. MacCulloch.

An open road crosses the moorland from Sleat to Broadford. It runs along the windy seaboard till, at  Knock, it turns inland through the scented moors, by many a ferny den, past Loch nan Dubhrachan, haunted (says romantic superstition) by a water-horse or kelpie.

This is expanded upon in page 239.

We may see traces of them in the water-bulls, water-horses, and kelpies which are said to haunt so many lochs and streams. The two former have the ordinary animal appearance, but are of a vast size, and naturally are very terrifying to the scared beholder. They pursue him, and when they catch him, carry him beneath the waters to satisfy their hunger. Foals and calves of a highly spirited temper are known to owe their male parentage to these demoniac animals. But they could also change their shape, appearing even in human guise, and luring the unwary traveller to the loch-side, where they resumed their awful form when it was too late for him to flee.

The nearer of the two Storr lochs. Loch Fada, is known to be haunted by a water-bull; it was also the haunt of a water-horse, slaughtered with a knife after it had killed a man. Loch nan Dubhrachan, between Isle Ornsay and Knock, was also tenanted by a water-horse. As this latter loch is close to the high road, which here runs through a lonely part of the island, it is not to be wondered at that it is an object of local terror. The water-horse had a penchant for pretty girls, but they did not like his attentions. No young woman would venture near Loch Sgubaidh in Strath (where dwelt a water-horse), lest he should rush out and carry her off. 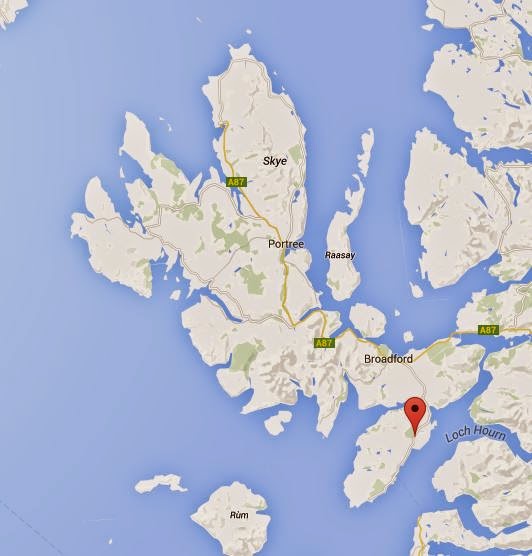 Rod Mackay in his "Glossary of Gaelic Magic" says that Loch Nan Dubhrachan was a transliteration of the old Gaelic meaning "loch of the black, stretched out one". Alisdair Alpin MacGregor in his 1935 book "Somewhere in Scotland", relates how the loch was actually dragged with a net in 1870 in an attempt to catch the creature behind so many local fears and stories:

Perhaps the most astonishing incident connected with a water-horse was the dragging of a loch in Skye with a view to capturing this evil monster. Between Knock and Isle Oronsay, in the Sleat of Skye, is a loch called Loch nan Dubhrachan. So persistent in the neighbourhood were stories of the manner in which “a beast” inhabiting this loch sought to waylay islanders who dared to pass by at night-time that eventually it was decided to drag the loch with a large net.

This was actually carried out in the year 1870; but the water-horse astutely evaded capture! During the dragging operations, however, the net became entangled with some obstacle under water. This so terrified both spectators and those engaged in dragging the net on opposite sides of the loch that they all fled to their homes, convinced that at long last they had proved the existence of the water-horse.

Some years ago I visited an old man named John MacRae, who lived in a cottage by the steading within earshot of the Old Manse of Glen Elg, and who, as a boy at Isle Oronsay witnessed the attempt to capture this water-horse. So noisy in spate was the burn at the end of John MacRae’s cottage that at times I used to find conversation with him quite an arduous undertaking, even when the door was shut. But I managed to take down from him, verbatim, the following account of the dragging of Loch nan Dubhrachan:

“I was there myself at the loch between Isle Oronsay and Knock,” said John MacRae, “when they trawled for the each-uisge - for the water-horse like - just in yon loch below the road. It’s called Loch nan Dubhrachan. A cattleman and his wife came to cut rashes to thatch the house. They sat down to take a rest and the man observed a small, black object on the shore of the loch. ‘Look!’ he said to the wife, ‘that will be one of the farmer of Knock’s cows washed ashore, and that was drowned in the loch, or maybe one of the sea-cows they would be seeing in olden times.’

”So he went down. As he neared, the beast swam out with his head below water, putting little waves ashore. You may be sure the people was terrified. They were certain it was the each-uisge. So Lord MacDonald said he would dredge the loch - trawl it like, for the monster. Well, he got all his gillies and gamekeepers out one day with a big net. And they started walking along opposite sides of the loch like, dragging the net after them.

“I saw the thing myself. I was a boy going to school. We got a holiday that day. Well, we were all watching carefully when the net got stuck, and all the gillies got the fear of death on them. So they just dropped the net, and ran back from the loch. I mind the day fine. A while after they commenced again; and after a while the net came away on a sudden. Well, then, they pulled it in like, afraid all the time what would be in the net.

“Is it pike you call them long things?” inquired MacRae, demonstrating an approximate length from the tip of the forefinger of his left hand by placing his right hand sideways on his left arm.


“Pike, I think you call them. Anyway,” he concluded, “there was nothing in the net at the finish but some mud and two small pikes.”

An interesting tale and made that little bit more interesting by the mention of local man, John MacRae. You may recall the near legendary tale of Dr. MacRae and his Loch Ness Monster film. Thanks to the research of Mike Dash, we can now be fairly certain that Dr. MacRae was a Farquhar MacRae who lived from 1855 to 1948, having retired to the small village of Ratagan by Loch Duich. Mike also mentioned that Farquhar had a brother called John.

From our account here, John was a schoolboy in 1870 and so was likely born around 1855-1860. Since Farquhar was born in 1855, that certainly make this John MacRae a contender to be a sibling. Moreover, the interview with Alisdair MacGregor was conducted in 1932 in Glen Elg, about six miles to the west of Ratagan. Unfortunately, 1932 probably predated the Loch Duich film by a few years, so one would presume MacGregor would be unaware of any such film.

However, it seems sea monsters stories ran in this family. Is this significant? Probably not, but the family name of MacRae and strange monsters is carried further by the well known account of a sea serpent sighting by the Reverend John MacRae in August 1872.

This John MacRae was church minister of Glenelg and had his sighting about 10 miles as the boat travels from Loch Duich. His testimony may suggest a multi wake aberration, though the behaviour of the object(s) suggests otherwise. Perhaps it was seven otters swimming in a line!

The account and sketch below are taken from A.C.Oudeman's "The Great Sea Serpent".

As we were getting the cutter along with oars we perceived a dark mass about two hundred yards astern of us, to the north. While we were looking at it with our glasses (we had three oil board) another similar black lump rose to the left of the first, leaving an interval between; then an other and an other followed, all in regular order. We did not doubt its being one living creature: it moved slowly across our wake, and disappeared. Presently the first mass, which was evidently the head, reappeared, and was followed by the rising of the other black lumps, as before.

Sometimes three appeared, sometimes four, five, or six, and then sank again. When they rose, the head appeared first, if it had been down, and the lumps rose after it in regular order, beginning always with that, next the head, and rising gently; but when they sank, they sank all together, rather abruptly, sometimes leaving the head visible. It gave the impression of a creature crooking up its back to sun itself. There was no appearance of undulation : when the lumps sank , other lumps did not rise in the intervals between them. The greatest number we counted was seven, making eight with the head, as shown in the sketch N°. 1.

The parts were separated from each other by intervals of about their own length , the head being rather smaller and flatter than the rest , and the nose being very slightly visible above the water; but we did not see the head raised above the surface either this or the next day, nor could we see the eye. We had no means of measuring the length with any accuracy, but taking the distance from the centre of one lump to the centre of the next to be six feet , and it could scarcely be less , the whole length of the portion visible, including the intervals submerged, would be forty-five feet.

Whether Farquhar MacRae knew of this story or was a relation of Rev. John MacRae is not known. What is known is that a small stretch of the East of Scotland had its fair share of monster lore.