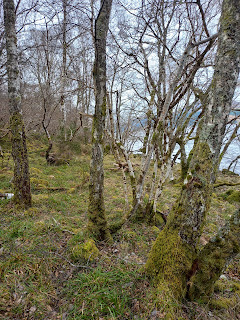 It was a quick trip to the loch this Sunday as I got up at 0630 in Edinburgh and arrived at the village of Inverfarigaig by about 1030. Surprisingly, I was greeted by patches of snow around the outer lying villages, though the loch seemed pretty clear. I also had to dodge an unusual number of cyclists until I realised the Loch Ness Etape cycle race was coming soon and there was plenty of practise runs going on.

The day basically consisted of watches from four areas. The first was near the Wall which is less than a mile on from Inverfarigaig at a parking spot where I sometimes like to watch the loch from. The loch surface was pretty calm as the sun occasionally broke out from the clouds but it stayed dry. From there it was a drive of a few miles to the second spot at Whitefield and the beach where Lachlan Stuart took his famous three hump photograph in 1951.

I walked for a long distance south crunching through myriads of pebbles keeping an eye on the loch but also the low lying branches that sprouted towards the loch. There was what looked like a big black water tank lying on the beach. Did it come from the road or from the loch? It was a bit hard to say either way, I suspected it was fly tipped from the road and rolled down the short hill. Either way, it is a shame that rubbish is too often encountered on the beaches.

Driving onto to the outskirts of the northernmost village of Dores, I disembarked again with camera and binoculars for a walk along the southern side of the beach, heading back the way I had come from towards the salmon farm. Everything was setup for photographing an appearance, but the old girl would not oblige. By the way, here are some tales from the salmon farm, as told by Ally MacLeod on Steve Feltham's Facebook page, here and here.

The salmon farm has had some monster stories over the years. It was not long after this blog started that I covered the interesting picture taken by Jon Rowe (link). The annotated picture below shows the two "protuberances" to the left, the shadowy water and my impression of the back. All speculation of course, but they certainly were not two birds bottoms up. Some suggest this place should be crowded by Nessies trying to get at all those salmon. The only problem with that is the fish are impossible to nab but I always fancied this was a good spot for CCTV or a webcam. 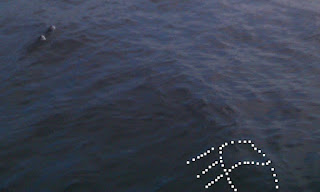 It was then onto Dores and I grabbed the camera and binoculars again and went for a walk along the southern part of the beach. I went down almost as far as the salmon farm but nothing showed despite the ideal conditions for a surfacing. With that I drove on and parked by the Dores Inn and walked along the top part of the beach as far as Tor Point. The forest there has been landscaped to allow tourists and locals to walk along a nice path around the point and onto Aldourie. It was a pleasant walk with various points from where you can go straight to the shoreline. I stopped at one such place and conducted a final watch opposite a point close to Lochend (picture below). 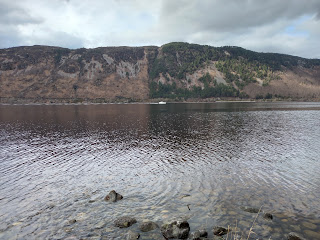 A white cruiser made its way along the opposite shore and the background hills gave the odd impression of being made of two parts with a split down the middle. It was near this walk that a local gave me an account of their sighting with a friend back in August 2018 (link) and one of the sketches is below. I chatted with them but they wished anonymity, which makes me wonder how many sightings are like this because of the reception they may get from sceptics? 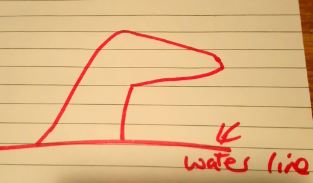 As an aside, I had trouble finding the above 2018 report and had to look through the annual reviews which I have now updated up to 2021 and are useful as a kind of index for events since 2012 (link). On the way back, I checked in with fellow monster hunter, Steve Feltham, who was working  on his models. We chatted through the issues of the day such as webcams, the salmon farm and other recent events. I have to agree with Steve that the webcam is done once the paddle boarders came forward as some alleged "mysterious" objects.

I would just say to anyone using this under powered webcam to do some "calibration" and present clips or images of what you identify as known objects be they boats or otherwise. With those provided, they can be compared against what is claimed as "unknown". But to this day, no one down below has corroborated any of these images, so case closed for me. However, we hope for better, shinier, whizzier webcams for all those budding remote hunters to move over to. Just don't expect the same number of mystery hits, people.

With that it was back on the road south and the expectation that I will be back up next month for an extended visit. Good luck to all who endeavour to capture images of that elusive monster in the months ahead.

Comments can be made at the Loch Ness Mystery Blog Facebook group.