A Painting of the Loch Ness Monster?

I found this picture in a relatively old book on Nessie. It claims to be of a sighting of the monster but the source they claim for it (Mary Evans Picture Library) has no reference to it.

Has anyone else seen this before? 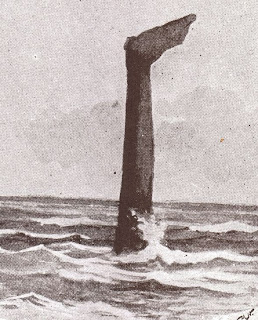 Readers may recall that I mentioned that Rupert Gould had decided that the Spicers had just seen a "huddle of deer". This was probably based on Mrs. Spicer saying that part of the creature looked like a young animal such as a deer and that there was a track found at the spot which some claimed could just be a deer track.

The obvious issue is that the Spicers claimed to have seen something that looked like a huge grey snail with a long neck. Not quite deer I would have thought.

My final point is deer tracks and deer activity. I consulted an author on deer tracking and put the question to him:

"The context is some hillside forest falling down to a road with traffic and then on the other side some bushes leading to the loch side shingle beach.

There is an area of flattened grass on the loch side leading to the beach and on the other side of the road was some kind of track before the forest.

My question is really could this be a deer track but it seemed odd to me that a deer track would cross a road and onto a dead end beach.

Also, when would deer be most likely to cross such a hazardous track/road?
Morning, afternoon or evening?"

His reply was that it is possible because deer do "curious things" but ultimately he could not say. The point being that "curious" implies this was not a normal deer track situation. After all, a track crossing a road onto a dead end beach is not the usual deer tracks through forests and moorlands.

The other point the deer author made was that deer activity follows a circadian cycle. That is, deer are most active at sunrise, noon and sunset. In between their movements move to a minimum.

I also saw a study which showed that deer activity veered away from areas of human activity such as country walk paths which further suggests that deer tracks across roads are less likely.

1. Deer tracks across roads to dead ends is not normal.
2. Deer activity cycle was near a low point during this sighting.
3. Deer avoid areas of human activity.
Posted by Glasgow Boy at 04:37 No comments: