Over on Steve Feltham's facebook page he alerts us to an item from BBC Radio Scotland's "Out of Doors". The person interviewed is Iona Moir who was one of a carload of people who witnessed the monster in its multi-humped and long necked aspect back in October 1936. This was a repeat of an interview with Iona from 2017 when she would have been about 90 years old and must have been about 10 years old when this event happened.

This is a story well known to Loch Ness Monster enthusiasts as the Marjory Moir sighting and the sketch above is taken from Tim Dinsdale's 1961 book "Loch Ness Monster". Iona was Marjory's daughter and the youngest in the number of five eyewitnesses. Her mother can be seen in the picture below being interviewed for the BBC's 1958 documentary, "Legend of the Loch". 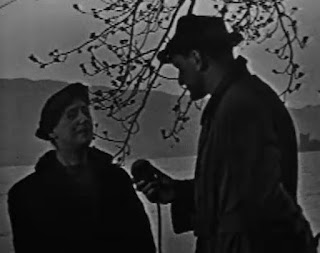 Back in 2014, a granddaughter of Marjory had contacted me with the transcript of a tape conversation her grandmother had made back in the 1980s before she died. You can follow that aspect of this sighting here. I also covered this classic sighting in general back in this 2011 article. You can listen to the interview with Iona here for the next 26 days and it starts about 18 minutes in.

For those who cannot access the BBC podcast, I have recorded the segment to this link.

I recorded this audio interview with my mobile phone, so anyone that cannot link to the BBC interview, let me know. The one point I would make from this interview is Iona's speculation whether that monster was the only monster and once it died, that was it. The teams of investigators who turned up in the 1960s and 1970s were too late in her opinion.

I note Harry Finlay made a similar remark when we talked about his 1952 encounter. I can assure them that what they saw were likely different creatures and there were and are more tales to tell of the Monsters of Loch Ness.

POSTSCRIPT: I am sure there was a video on YouTube somewhere of Iona Moir being interviewed. If anyone can track that down, let me know.