I will add this to the general link on the sidebar but I stumbled upon another as I was trawling around the Internet in my usual fashion.

It was Lieve Peten's Nessie web pages from the now defunct Yahoo! Geocities. Lieve was a Belgian lady who lived with Frank Searle during the 1970s as his assistant monster hunter. She admitted though in a 2005 documentary that the relationship went a bit further than just watching the loch. That Frank was quite the charmer it seems.

There is also a Geocities specific archive site which looks better to me: link 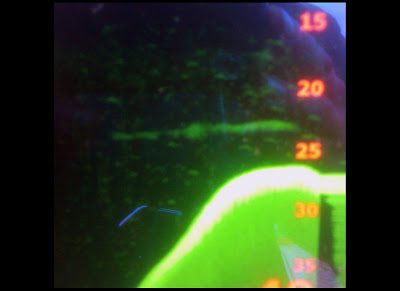 The Nessie Sonar case gets more complicated each time something pops up on the media or someone else adds their opinion on the matter. However, I have been in email contact with the witness himself, Marcus Atkinson, to clarify and answer some points. I will come to those at the end of the post.

First off is a piece by Loren Coleman on the Cryptomundo website where he refers to Dick Raynor's website addressing some sonar questions. Dick Raynor skippers one of the boats run by another cruise company called Castle Cruises Loch Ness.

Straight after that, there is speculation about the man who got the sonar hit, Marcus Atkinson, who works for a competitor cruise company called Cruise Loch Ness. To quote Cryptomundo:

But perhaps truly damning, this year “Cruise Loch Ness” are running special monster hunting trips with underwater cameras on the boat skippered by…Marcus Atkinson – the man behind all the publicity of this new “discovery.” Therefore, some locals are questioning Atkinson’s big splash in the media this week. Is it a marketing move?

The cruiser website carries information on this monster hunting variant of their trips here. One wonders who the concerned "locals" are in this instance.

Now as regards so called marketing moves, what is this meant to tell us about anything? If I refer you again to Scepticism's Seven Deadly Sins, Mr. Atkinson had committed "sins" number two and six. That is, you are not a credible witness if you are involved in a commercial outlet near the loch or have gained financially from the sighting. The second point is answered as the William Hill £1000 prize that Mr. Atkinson won was not announced till months after his sonar story.

The first point is not relevant in my opinion as the original sonar hit story was on the 15th September 2011, way past the peak of the tourist season and only a few weeks before the whole industry slowed down significantly for the Autumn and Winter. Hardly a judicious time to stage such an event and rather more likely to add to the sincerity of the testimony. As for the current story, the newspapers I consulted (The Daily Mail and The Sun) don't even mention these new monster hunting trips.


However, the fact that Cruise Loch Ness sees an opportunity here needs to be looked at from both sides. The ramp up to the new season began only two weeks ago at Easter time (though things tend to dip again until the school holidays begin) and this rerun of the story is only a week old so any talk of "cashing in" would be premature. Moreover, if the company has upgraded their "monster hunting trip" variant with underwater cameras then that looks to me like a cash investment which means a degree of risk is being taken on. That's how capitalism and free enterprise works. If people (and competitors) don't like it, they could petition the Scottish Government to nationalise the entire fleet of all Loch Ness tour operators (okay, that's a bit tongue in cheek).

For completeness, it looks like there are five cruise companies operating in Loch Ness:

They operate at various points around Loch Ness near Inverness, Abriachan, Drumnadrochit and Fort Augustus. But essentially they are competing against each other since tourists tend to only pick one cruise when they visit the loch. In other words, one cruise company's gain is another's loss.

Such is the world of business at Loch Ness, but going back to the sonar trace itself, what it shows is still the subject of continued controversy. The Dick Raynor link above talks about sonar seeing debris and plankton along the thermocline though he does not explicitly state that this is what Marcus Atkinson saw that day. My own take on that interpretation is what does a sonar hit on the thermocline look like on these cruise boat sonars? Mr. Raynor has been using such devices for a long time and has been collecting various images for years of things that can fool witnesses. Since the thermocline plus debris/plankton/etc is not exactly a rare event, perhaps a picture of his own would help his theory?

It is one thing to theorise, it's another to prove it. I'll admit Nessie cryptozoologists such as myself will not be forthcoming with evidence that proves beyond a reasonable doubt that the phenomenon is a particular exotic species but this is also a problem with sceptical interpretations of Loch Ness Monster reports. A theory is proposed but too often no follow through to prove it is undertaken. It is just assumed people will accept it because it is plausible. This is clearly not scientific and leaves things in a suspended state. Understandably, some theories will not be testable due to their nature and people have other priorities and lives to lead. But at the same time the "trust me I am an expert" line is not the way forward.

Proposing makes it plausible, testing makes it probable (or improbable). In general, if it can't be tested, it's not fully scientific.

In contrast, Tony Harmsworth, another seasoned Loch Ness Researcher, is doubtful of the thermocline as a cause if the boat was moored somewhere in Urquhart Bay since the combination of shallow waters and the rush of water from the rivers would disrupt it too much. He goes for a different interpretation such as a layer of fish.

Again, a typical cruise boat image of a shoal of fish for comparison should not be beyond the wit of man. Also, I am not sure fish are known for shoaling in Loch Ness which makes me wonder how diffuse such an image would be in comparison to our strong sonar image here? My other observation is that you will see the presence of crescent-like images around the larger trace in the above sonar image. These shapes are normally indicative of fish, so what is the larger object if those are fish? Admittedly, a clearer image would have helped in this assessment.

However, what the experts are both agreed on are the vagaries of sonar interpretation in Loch Ness and this would seem to be exemplified by their differing views on this image. This has implications for both sides of the Nessie debate.

To wit, if people cannot agree on what they think are common objects, how are they going to fare with uncommon objects? Let me put this another way; if the monster exists, what would its sonar trace look like? I don't know and I bet none of the experts do either. We can guess, but we can never be sure. Though some don't think they need to be sure - they don't believe there can ever be a Loch Ness Monster!

Now getting back to Mr. Atkinson, it's good to get things from the source and so his input is helpful in clarifying matters.

Firstly, he (or his company) did not stir the thing up again. In fact, he says it's "a bit weird that the whole thing has blown up again". He points out that the original story in September 2011 was not given to the papers by him but by monster hunter Steve Feltham. But (in accord with my above bit on business), now that the publicity has come to them, they are not going to turn it away. I don't blame him for that, don't look a gift horse in the mouth.

As regards the sonar trace itself, Marcus says:

"I have always said I don't know what the picture is, and I would like to know."

Something mysterious? Yes. What exactly? That's what everyone has been discussing to no firm conclusion.

Marcus admits he is not an expert but he told me that he has had seven years experience of using the sonar hardware and that means he is no novice either. And with 17,500 miles on the loch clocked up after just three years, he says it is going to be people like him that are more likely to get the unusual sonar hits. In that light, he says he has never seen a trace like it in his time there.

One final point he makes is concerning the thermocline explanation. His colleague went back to the same spot an hour or so later but the contact had gone. I can see his point there. Even if the thermocline varied in intensity, one would still expect to see something there.

But we are not convinced it is the thermocline and so the debate continues. The area around Loch Ness was also reputed to be the haunt of the last dragon in Scotland, slain by a Fraser of Glenvackie. Apparently, this dragon was not the same beast as the Each Uisge which haunted the nearby loch, so scope for dragon hunting continues to this day!
Posted by Glasgow Boy at 11:50 No comments: