After speaking to Harry Finlay and reliving his famous encounter with the Loch Ness Monster in 1952, I thought I would do some follow up. These days, people can sit in the comfort of their armchairs and access many a resource online. In this case, that was not an option as not all newspaper year ranges are digitally online. In this case it was off to the local library to examine the microfilm rolls for the Inverness Courier and Northern Chronicle in August 1952.

As it turned out, there wasn't much to add to the story as the Inverness Courier from August 22nd 1952 gave a rather terse account below while the Northern Chronicle had nothing to say. My expectation was that the sighting by Dores school kids a few hours later may have appeared with further details, but alas, the clipping below does not add much to what was already known. 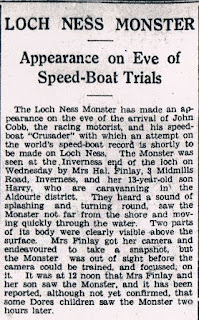 One thought that did pass my mind was whether the creature in question was actually entering the loch when it was seen by the Finlays. I say that because the entrance to the River Ness at Bona Narrows was less than a mile away and the creature gives the impression that it is making its way at speed from that point into the loch.

Of course, I cannot prove that but you will go on to read that John Cobb and his speedboat team were on the eve of arriving at the loch and the monster's spectacular appearance seemed almost portentous as John Cobb was to die in his speedboat accident on the 29th September, just over 5 weeks later. 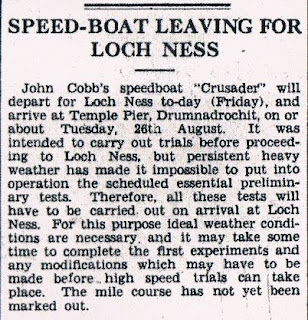 Seasoned Loch Ness fans will know about the valiant but fatal attempt at the water speed record at Loch Ness by John Cobb. I have written about it before on this blog but it had not then twigged with me the proximity of the Finlay and Cobb events. Was the creature seen by Greta and Harry Finlay responsible for the death of John Cobb? The accepted explanation was that the Crusader had hit a wave caused by the support boat, the Maureen combined with a known weakness in the forward planing shoe of the boat (note the possible waves in the picture below). 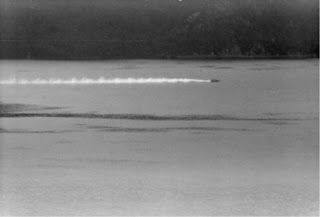 The sequence of events is taken from this website:


When the morning of the 29th arrived conditions were far from perfect, slight ripples on the surface of the water .By almost 9.30 am conditions had worsened, then events took a turn for the better in that surface conditions had improved dramatically.  At 11.25 am 'Crusader' was again put in the water at Temple Pier and the official observers boat 'Maureen' set off to land the timekeepers at the Drumnadrochit end of the Loch. The 'Maureen' had reported the timekeeper were ashore at 11.50 am. At 11.55 am 'Crusader's' engine was started and she catapulted out at an angle from Urquhart Bay. Cobb came round to his starting point and revved his engine up to full power. 'Crusader' rose in the water and the attempt was under way, the time was almost 12 noon.

With a slight burst of spray in front and a trail of white foam behind she skimmed over the course and reached the second marker. As 'Crusader' reached 200 mph eyewitness accounts say she was hardly touching the water when she came out of the measured mile. Then 'Crusader' started to decelerate to make the second run but hit a wave causing her to bounce twice, she recovered for a second but the next moment the horrified spectators saw the boat plunge in a whirl of spray and foam, flaked with flying wreckage. There was no audible explosion but the boat gave the appearance of bursting apart. Hopes for Cobb's safety was roused when the yellow light attached to his safety apparatus bobbed to the surface. The 'Maureen' made her way to the floating debris and lowered a small boat which reported Cobb had been found. The news brought an immediate call over the radio for a doctor and ambulance, but later it became clear Cobb was dead, probably killed instantly.


Another site states that Cobb was "furious" with the late arrival of the Maureen and any residual waves left behind but pressed on regardless. One presumes from this that he did not regard it as a serious concern but the main theory of how this ended in disaster remains. However, for me, the sighting of a twenty foot plus creature entering the loch some weeks before should have put the brakes on this project from the start.

Of course, John Cobb and his team did not believe this and the Inverness Courier piece on the Finlay sighting was not taking it seriously enough to advise a cancellation. Indeed, another clipping from the time had some people convinced a series of wakes observed during the Crusader trials were monster related, but they were assured these were again just support vehicles. Were people that undiscerning?

On examining the story again, I tried to visualise the sequence of events. The "Maureen" pulled in at the "Drumnadrochit end of the loch" which to me was likely by the Castle, not far from where the Crusader took off from Temple Pier. So, the Crusader took off and headed south one mile to the marker. It then decelerated to turn round and run the second mile back when the accident happened.

So, the question for me was why the Crusader did not hit the Maureen's wake when it was at its strongest closer to the Castle at the beginning of the run? Perhaps because the boat had not picked up speed? But a mile down the water it was dissipating and indeed, it has to be surmised that it was a reflection from the sides of the loch that was encountered, not the original wake. For me, that is a weak explanation as reflections from the loch are not as strong as some make out.

Of course, even if the boat wake theory is proven inadequate, that does not mean it was the Loch Ness Monster as a freak gust of wind could have been enough. Over sixty years on, no further water speed records have been attempted and long may that continue while a large creature continues to move beneath the surface of Loch Ness.