This newly named sea predator is doing the rounds. From io9:


Back in 2009 we told you about Predator X, a gigantic pliosaur whose fossilized remains were found in the Arctic. Now, after years of research, paleontologists have officially inducted the Jurassic-era aquatic beast into the science books. Its name is Pliosaurus funkei, a four-paddled apex predator that terrorized the seas over 147 million years ago. But as the researchers' investigation has revealed, the reptile was not as monstrous as initially reported. That said, it was still one of the most terrifying animals to ever appear on Earth.

Looks like "Nessie the Plesiosaur" has finally been upstaged! 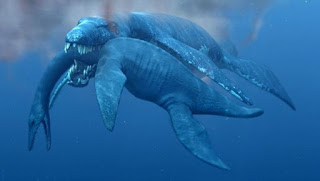 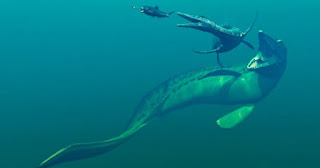 Following on from a string of comments in a previous post and another item noticed on the Internet, the title of this post seemed appropriate.

A post recently appeared on the sceptic dominated site cryptozoology.com from John Gillies giving a link to a night vision video he took some days back. John and I have something in common - we are both Central Scotland Nessie hunters and we both have night vision equipment. His video got short shrift, but as one who has attempted the same, I can sympathise with the challenge of night vision hunting.

I tried night vision equipment for the first time back in April and you can read the details here. The video clip below shows what is achievable with entry level equipment.


Now normal explanations such as boats and various local wildlife are absent at night time so they can be discounted (though obviously it is not impossible that someone could take to the loch without any giveaway torch light). Other misidentifications such as logs will still be around so there is always room for caution. John's clip shows two dark patches on the surface of the loch which do not appear to move throughout the sequence. My thought was that perhaps they might have been wind slicks which in daytime are patches of calmer water reflecting the darker opposite shoreline while the surrounding ripples reflect the sky.

However, what a wind slick with both dark sky and hills looks like through infra-red sensors is another matter. I don't know, but dismissing the clip without offering an explanation is not critical thinking.

My belief that the Loch Ness Monster is a creature of darkness suggests surfacings at night may be more likely. However, just because it is as dark above as it is below is not necessarily a reason to come to the surface. There has to be a reason for such behaviour and the usual suspects of food, reproduction, territory, etc would need to be considered. In the meantime, such tools of exploration should be encouraged.

The second domain of darkness is right at the bottom of the loch. My belief is that these creatures mainly dwell at the bottom in inert, energy saving states. I would also think they might burrow into the four metre plus sediment just like air breathing reptiles burrow into the soil to avoid the extremes of winter. In such a state, they would be completely undetectable which brings us to underwater television.

Plugging in a TV feed and sending it down to the bottom or sides of the loch on a mobile carrier was done in the early 1980s and was also used during Operation Deepscan. The technology has grown more sophisticated and the Remotely Operated Vehicles (ROVs) used in the offshore oil and gas industry are impressive in their range of abilities and have been to Loch Ness more than once.

During the making of MonsterQuest's prematurely titled "Death at Loch Ness" in 2008, ROV manfacturer, Seatrepid, employed their Outland 1000 and SeaRover II in deep exploration of the loch. You can see the results below.


The company's ROVs also were employed in 2000 to pick up golf balls from the bottom of the loch!


But like other modes of Loch Ness hunting, it has its drawbacks. For a start, the extent of the area under light is quite small and so the ROV would have to travel quite a bit to cover more surveyable ground. It need not be pointed out that the bottom surface of the loch covers a lot of square miles. The first ROV clip above is a bit misleading in that respect as the two ROVs look as if they are near each other and doubling the amount of light levels.

Secondly, as you can see from the start of the first video, sediment disturbance can throw up quite a bit of a cloud which would obviously make visibility even worse. However, coming upon an area which suddenly throws up a cloud of silt is itself a curious if not exciting prospect!

Lastly, I am led to believe these machines are quite noisy. Clearly, things sound different underwater than they would in the air, but it has to be asked what the reaction of the Loch Ness Monster would be to such an approaching machine? Would it move away before the light hits or would it just stay still? Even if it did move off, one would expect a could of silt and again that would be anomalous in a normally inert environment (I am assuming currents such as seiches have a minimal effect on the abyssal region of Loch Ness).

But we can only go with what we know and have. It was assumed into the 1960s that sustained, wide camera coverage of the loch surface would solve the mystery. Reading F.W.Holiday's time as an LNIB volunteer, the problems were there to see - distance, weather and human error (see "The Great Orm Of Loch Ness").

The move to sonar and fixed underwater cameras in the 1970s was then mooted as the way forward but again the inky depths of the loch and the ambiguity of sonar interpretation defeated the endeavour.

Will night vision equipment or ROVs further the investigation? Perhaps, but considering such things are currently the domain of low budget amateurs such as myself or the whim of companies making brief visits to the loch, then confidence is not exactly sky high.

But consider this, the two exhibition centres at Drumnadrochit take in millions per year from tourists. The entrepreneurs who own these facilities seem to have done very well out of the Loch Ness Monster. The local economy is said to benefit to the tune of £25 million from Nessie. What have they put back into the investigation of this mystery that has rewarded them so well over these last 30 years? No doubt, something has been put in, but it seems research has been too dependent on visiting Americans or companies field testing equipment.

How much is a ROV? No doubt they can climb into a six figure sum. A casual google around found this ROV priced at $35,000. I don't know if this is suitable and it may require further modifications, but compared to the millions that flow into the Drumnadrochit coffers, it is not much at all.