Continuing our analysis of the famous Spicer land sighting, Dick Raynor pointed out to me that in Gould's biography he had changed his mind about the incident. In that book, ("Time Restored" by Jonathan Betts) there is a chapter on Gould's investigation into the monster and the eventual publication of his 1934 book "The Loch Ness Monster and Others".

Betts had access to Gould's own annotated copy and in it Gould had written the words "Were I rewriting the book, I should have omitted this case. I think the Spicers saw a huddle of deer crossing the road. RTG".

Why one may wonder the Volte Face after being so convinced of the genuineness of the case on interviewing the Spicers first hand? Perhaps he had decided that Loch Ness Monsters do not cross roads or had he grown more sanguine on the subject as we know he received some scorn from colleagues and others alike since publishing his book? Perhaps he rethought Mrs. Spicer's comment that part of the animal looked like the head of a young animal like a deer.

These speculations aside, in the manner of the otter explanation, how credible is it that the Spicers mistook deer for a large aquatic creature? I have driven along the Foyers-Dores road many times and it is a rather tight corridor at times with mountain looming up to your side on one side and narrow beaches on the other. If the Spicer location is like that then it is unlikely deer are going to appear out of a wall of stone and then simply disappear on a narrow beach (at least otters have some semblance of doing that). George Spicer reported that he drew up where the creature had crossed and saw nothing. I doubt a group of deer would have been so easily concealed.

And if anyone may say that the Loch Ness Monster cannot appear from stone either then I would say that such a comment was aimed at the idea that deer tend to only appear out of forests. Does the Loch Ness Monster appear out of forests? Is it even small enough to get through tree spacings? I do not think the monster is so mobile and may only go as far as the other side of the road. Why it would do that is left to Nessie behaviouralists!

Of course, this all rather depends where the sighting took place, the Spicers said it was somewhere near Whitefield which is opposite Urquhart Castle. That area is certainly short on "huddle of deer" space. I think the otter theory is more credible - but of course we also debunked that in a previous posting.
Posted by Glasgow Boy at 07:00 1 comment:

More on the Spicer Sighting 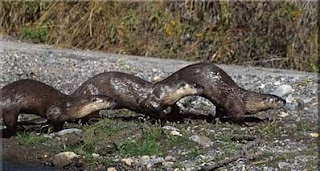 This really combines what I said in my last post about the secularization of Nessie and I apply that post's thoughts to this particular sighting.

Skeptics may rightly scold some Nessie enthusiasts for accepting any old reported sighting as a genuine Nessie sighting but on the other hand Nessie believers should not accept any old explanation offered by skeptics.

As said before, the Maurice Burton and Ronald Binns view was that the Spicers had seen a line of otters crossing the road. To account for the bulk on the left and the neck on the right, Burton suggested the adult otter was the "bulk" and some cubs ahead of her were the neck undulations.

So we can accept that and close the file?

Not really. I emailed an otter conservation group and asked a simple question. Do otter cubs follow or go ahead of their parent? The reply was:

So cubs follow their mother - not the other way round as Burton postulated. That makes the otter explanation somewhat less convincing. In a piece of tautology, the skeptic may suggest that in this case the mother did follow the cubs. You are not any under compulsion to believe that leap of assumption making.

One could also add that otters tend to be active mainly at dawn and dusk whilst the Spicer sighting was late afternoon.

One may say "it is possible" and I say it is also possible my car will be struck by a meteor this week - possible but not probable. You have to ask yourself if an explanation is not so much "probable" as "reasonable". I do not think the otter hypothesis is reasonable.
Posted by Glasgow Boy at 13:07 3 comments: