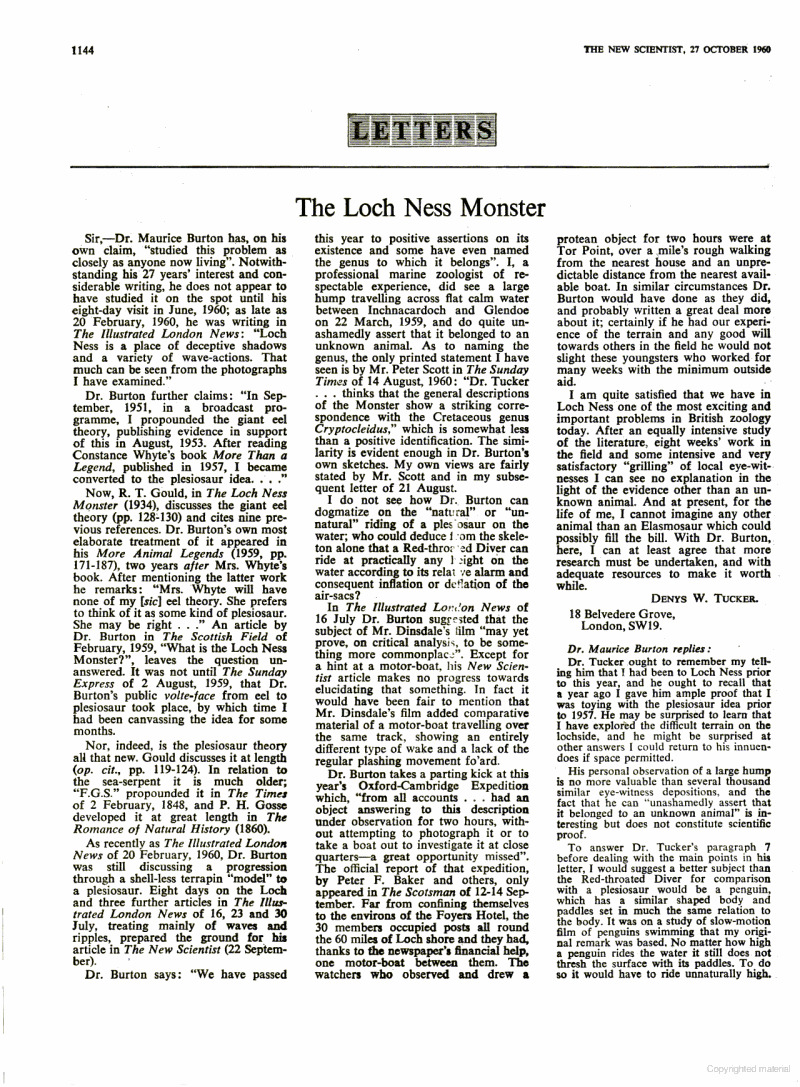 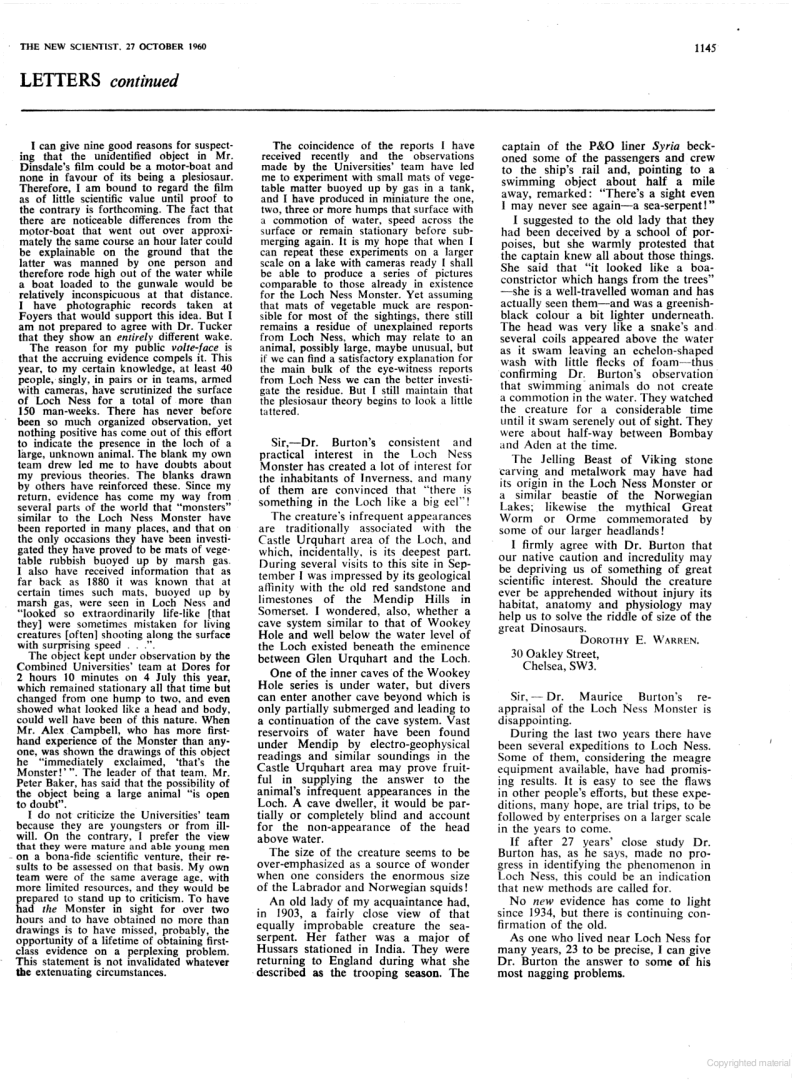 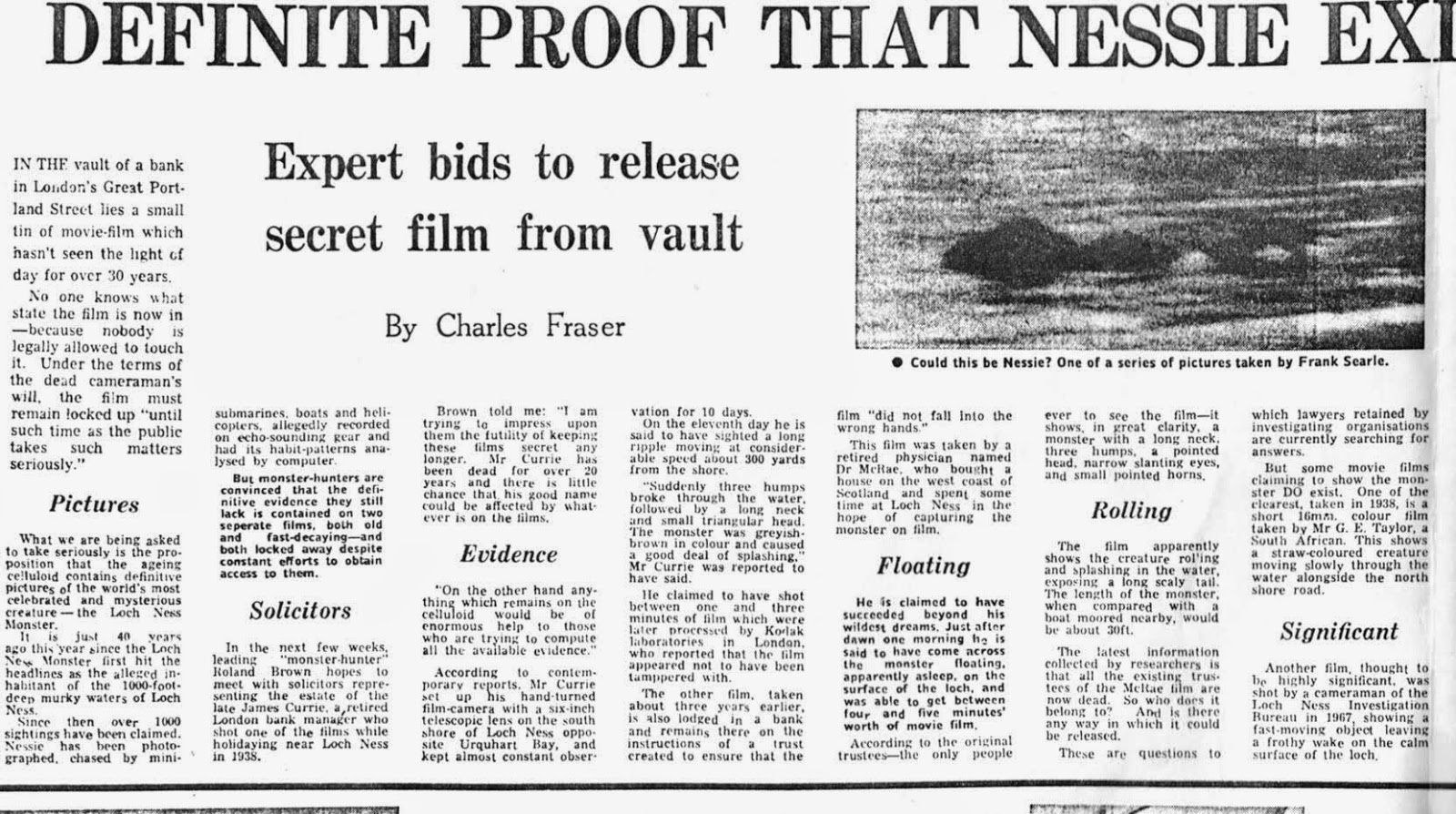 This post is probably more by way of a postscript to the previous article on the MacRae film. The James Currie film is another alleged movie of the Loch Ness Monster which has never been verified to exist. The source of the story is an article in the Aberdeen Evening Express dated the 18th September 1973 in which the reporter (Charles Fraser) tells readers of the attempts by a "leading monster hunter" (Roland Brown) to get this film released for analysis. The article is reproduced above with thanks to Mike Dash for the scan.

The article takes us back to 1938, when retired bank manager James Currie of London arrived at Loch Ness with his movie camera and a six inch telephoto lens, determined to capture the Loch Ness Monster on film. Setting up his camera at a point on the shore opposite Urquhart Castle, he kept vigil for eleven days until his luck was in as the monster put in the desired appearance.

The account tells us that a wake appeared at 300 yards which soon led to the creature surfacing with long neck, three humps and a triangular shaped head as it progressed along the loch. We are told Mr. Currie exposed up to three minutes of film of this greyish brown creature splashing about.

However, having gone to these lengths to obtain this vital piece of footage, James Currie decided to place the film in a bank vault in Great Portland Street, London, "until such time as the public takes such matters seriously". At the time of writing, the article states that Mr. Currie had been dead for over twenty years.

If this all sounds familiar, you would be right. The whole saga sounds like the McRae story, but using a different person. But could this be another separate, sensational film hiding from view? The idea of not one but two detailed films of the Loch Ness Monster being under lock and key strains even the credulity of the most sycophant Nessie fan.

Unlike the McRae film, we have no information on Currie's family or genealogy that could lead us to a death certificate or any other information. We now have a clear picture of who Dr. MacRae was, but Mr. Currie was a bank manager and that is it. My own perusal of the British Library news archives turned up no such person, though admittedly, a newspaper mention is no guarantee, even for a bank manager.

Unfortunately, the newspaper article raises more questions than it answers. The reporter states that all this was reported in "contemporary reports". However, a search of 1938 press clippings shows up nothing about this incident. The closest I could find was a sighting of three humps, long neck and tail by a party of tourists on the 11th July near Invermoriston Bay, miles away from the stated location of James Currie.

By 1975, the article had entered the consciousness of the monster hunting fraternity. In a MacRae film exchange between Alastair Dallas and Alan Wilkins, Dallas had been asked about this Currie film. He said he had no knowledge of Currie or his film.

Fraser also recounts the tale of the MacRae film, but his retelling of that tale is full of errors. The article claims MacRae came across the creature floating, as if asleep. He claims a scaly tail was visible. Furthermore, he states a boat is visible in the film, scaling the creature to 30 feet. Finally, he asserts that all the trustees of the film were now dead.

None of these so called facts are in the account Holiday relates in his book, "The Great Orm of Loch Ness". We can only assume Fraser embellished the story and hence his telling of the Currie story is under suspicion of exaggeration too.

However, the similarities between the Currie and MacRae films suggests there is more than mere coincidence at work. Consider these parallels in the two cases.

Both men filmed a long necked monster with three humps.
Both films run for several minutes.
Both describe the head as being conical in nature.
Both men decided to keep the film in a bank vault until the matter was taken more seriously.
Both men had died over twenty years ago (25 years ago in MacRae's case).

Paul Harrison, who was involved in the hunt for the MacRae film also made enquiries to the Aberdeen Evening Express regarding the article author, Charles Fraser. No one from that time had heard of him, which suggests he was a freelance writer not permanently employed at their offices.

Enquiries to seasoned Nessie researchers also turned up a blank as to the identity of the so called leading monster hunter, Roland Brown. I also did a search for the variant "Ronald Brown" which proved negative as well.

One could argue that the name "Roland Brown" was a false name to allow the real monster hunter to get on with his detective work anonymously. The same could be applied to the Currie story being a cover for the actual MacRae film, but again deflecting so that the likes of Alastair Dallas would be left alone. However, this strained interpretation still leaves us wondering why the real investigator did not eventually step forward with whatever he had found?

All in all, the indicators point towards this 1973 article being a fabrication. Why it was done is not clear, but if Mr. Charles Fraser is reading, perhaps he could tell us!