On my usual strolling through the Internet in search of Loch Ness Monster curiosities, I came upon this item for sale on eBay. It was a copy of the Chicago Sunday Times dated 18th March 1934. The item can be found here. You can zoom into the article and read it for yourself, though the seller has only put the first page of the article on display.

By then, the Loch Ness Monster phenomenon was about ten months old and news of this Highland creature was now a worldwide topic of discussion. However, the memory of sea serpent tales from last century lingered in the American mind as the journalist presumed this to be an ocean going monster which had somehow got stranded in the loch. This was a line of thinking which has persisted in some form to this day. 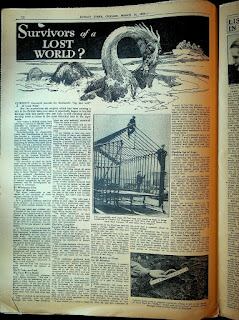 The catalyst for the article was the recent offer of a reward of £20,000 by circus owner Bertram Mills for the capture of the monster with that famous cage to hold her in shown. This equates to £1,440,000 in today's money. The article says this was equivalent to $100,000. What are the odds of getting five US dollars to the pound any time soon?

Fifty one sightings are referred to, relying on Rupert Gould's compilation researched a few months before. George Spicer's famous land sighting is given not a few words and Arthur Grant and W. Goodbody's sightings are given some publicity too. Spicer's sighting is stated as happening at 4pm.

With reference to its sea serpent characteristics, mention is also made of two sea serpent accounts. The first being the 1915 account of the U-28 submarine commander, Baron Von Forstner, followed by the 1918 account by another submarine commander, Captain Werner Loedisch. Finally, the only photograph of the monster to that point, taking by Hugh Gray, is discussed.

The other fact of interest is the sentence "What is it which has affectionately has been christened 'Bobby'?". This is a name of the monster which has long been lost to the mists of time as the public coverage of the creature evolved. The origin of this name is likewise a bit of a mystery and even Loch Ness historian, Nicholas Witchell, admitted in his book, "The Loch Ness Story", that he did not know where it came from.

I have seen the name used of the creature before, but its use is rather fleeting. After all, "Bobby" seems a ridiculous name to use for the monster and this is enough to explain why it faded from view. One clue as to its origin comes from the contemporary sea serpent researcher, .A. C. Oudemans, who says the name was given to the beast by the Daily Mail newspaper on the 12th December 1933. I have not seen the original source, but it nicely ties up with the expedition to the loch by Marmaduke Wetherell which was sponsored by the Daily Mail.

In fact, newspapers of the time stated that Wetherell was to leave London for the loch on the 16th, a few days later. I would therefore speculate that the Daily Mail felt they had to christen the monster which they thought they were about to shed light on - but never did. The name "Bobby" never got past 1934 but what about its better known name of "Nessie"?

Oudemans makes a similar claim for the Daily Mail, saying they first used this name in their Sunday edition dated June 24th 1934. Again, I have no sight of that edition, but further research showed this not to be the case. The oldest reference I found to "Nessie" was from the Edinburgh Evening News dated 9th January 1934, over six months before which discusses the then recent film taken by Malcolm Irvine. In those days, there were no YouTube clips to view, it had to be at the cinema or private cine reel showings. 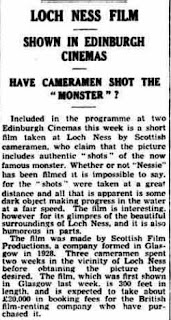 Looking at the old newspaper archives suggests the name began in Scottish publications and slowly percolated down south to other British newspapers over the years. But I found no 1933 references to the name "Nessie" which makes me wonder if this was a Scottish response to the London Daily Mail's insipid attempt to use "Bobby" only weeks before? This further report from the English Tamworth Herald dated 31st March 1934 shows the name heading south. 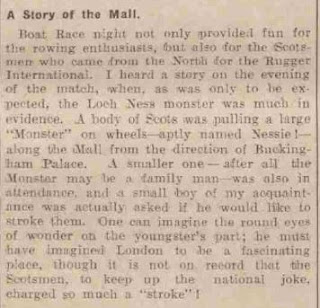 Here is a tale of a group of Scottish rugby fans down for the Scotland-England match towing a model monster named "Nessie". Having said this, the Inverness Courier continued to use the appellation "The Loch Ness Monster" or simply "The Monster" since it had come up with this original formulation which has stuck to this day. But what did Loch Ness Monster researchers think of the name "Nessie"?

Rupert T. Gould as far as I can tell, makes no mention of the name "Nessie" is his June 1934 book "The Loch Ness Monster and Others" preferring the term "Loch Ness Monster" which he attributes to the Inverness Courier. It is possible he had not heard of the term from his London base or perhaps he thought it a term too vulgar to use in serious research.

Twenty years later in her book "More than a Legend", Constance Whyte associates it as a name beloved of press reports but regards it as "undignified" preferring again "The Monster" or "The Loch Ness Monster" . However, she thinks it transliterates well with the local Gaelic name for the beast "An Niseag". This aloofness seems to continue with Tim Dinsdale in his first edition book who only mentions "Nessie" once in quote marks in reference to a letter from an eyewitness.

Ted Holiday is more contemptuous of the word when he also mentions it only once in his 1968 "The Great Orm of Loch Ness" when putting it in the context of comic tourist postcards. In fact, Holiday preferred the term "Orm" or "Dragon" on line with his more exotic views. It seems that least in the 1950s and 1960s, the word "Nessie" was not regarded as a label for the monster to be associated with serious research.

Doubtless, other monster hunters have and had their own preferences for how they mixed their monster terms. I myself prefer "Loch Ness Monster" but will also use "Nessie". Thank goodness "Bobby" never caught on,