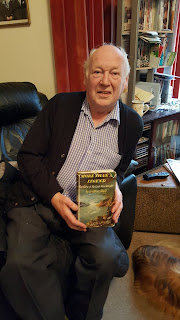 The picture a couple of paragraphs below is enough to let Nessie fans know that this post is about the 1952 close encounter between the Loch Ness Monster and two individuals - Greta Finlay and her son Harry. As recounted last year, I tracked down Harry to his home in Perth, Scotland and phoned him up for a chat on that day on the 20th August 1952.

However, some people said I should get Harry in front of a camera and record the account straight from the man himself. That task was done yesterday, having arranged a date and time with Harry, we met up at his house for the first time. Though I guess Harry would be somewhere near 80 years old, he looked a fit and sprightly eighty to me. 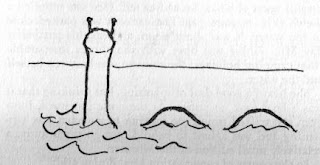 Of course, we chatted about the event amongst other things and Harry is one of that small band of people I call a "knower" rather than a "believer". When you see the Loch Ness Monster from a range of twenty to thirty feet, it is no longer a case of believing but knowing what you saw. Having said that, you can see the creature close up but still have no idea what you are looking at.

Mammal, reptile, amphibian, fish or something else? Harry couldn't give a definitive answer to that one and, apart from those who tell us more than they actually know, I would be in the same camp. Does it exist? Yes. What is it? I still don't know.

It was also good to finally get to see a picture of his mother, Greta, who passed away back in the 1990s. The picture below shows here with her husband, who took the initiative and reported the story to the local newspapers. I snapped this with my mobile phone, so the result doesn't quite do them justice. 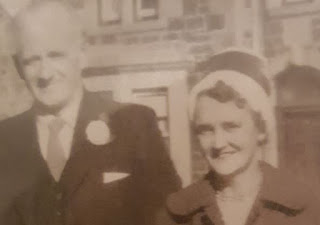 I asked Harry to roughly sketch what he saw that day for me which is shown below, though one would not really expect the drawing to diverge that much given such a monstrosity is going to brand itself onto one's memory to some degree. It is more a composite picture as the creature was first seen approaching Harry from the right, then glided past them, finally submerging with its rearward parts closest to them.

Harry's estimates of particular dimensions were added by him and if we add in the two water gaps between neck and humps we get near the 15 feet estimate of his mother given to Constance Whyte. Add in the presumed present but obscured tail and we get a creature in excess of 20 feet. 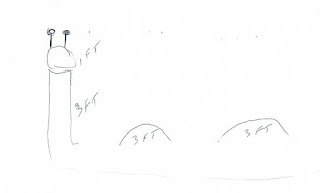 Having sketched the beast, I showed him the original from my copy of Constance Whyte's "More Than a Legend" with which I snapped a picture of him at the top of this article. But what you will hear from Harry was how he was a split second away from taking one of the best pictures of the monster ever but his Mum grabbed the camera from him, thinking he was fumbling! The Loch Ness Hoodoo strike again!

Enjoy this clip on a classic monster sighting from the very eyewitness himself.