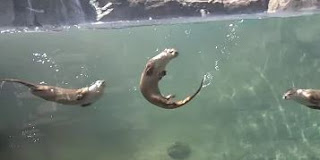 Back in January, I wrote a piece on the famous close up sighting by John MacLean and how new information concluded he was very unlikely to be fooled by what his critics claim was just an otter. That article is here and I always thought it was a bit ridiculous that an experienced observer such as John would mistake a three foot otter for an animal estimated to be twenty foot long.

So it was no surprise that despite writing that piece that one of the regular naysayers popped up on Facebook a week or so ago claiming ... it was just an otter. Perhaps they believe that repeatedly saying these things make them true. One person replied saying he saw some otters at Loch Ness recently and they are easily recognisable. But since sceptics proclaim there is no Loch Ness Monster, no matter what anyone says, it has to be something else.

So it was by a convenient coincidence that three otters were recently spotted in the River Ness which flows north from the loch. If you go to the Press and Journal link, you can see a video of them cavorting or feeding in the river. The river is about two hundred feet wide at this point which puts these otters about the same distance as the creature seen by John MacLean. A snapshot below shows one of them breaching the water. 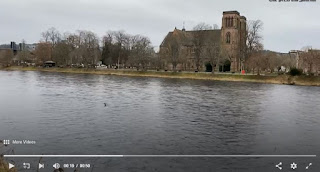 The similar distance is where the similarities end as the movement of the otters popping in and out of the water rapidly is nothing like John MacLean's 20 footer. Of course, they were recognised as otters and that is no surprise. They look rather small and that is because they are rather small. Yet somehow if they are transported ten miles down to the loch, they magically become monsters. Watch the video and tell me how these can be re-imagined as twenty foot monsters?

So, sceptics, please stop insulting the intelligence of numerous eyewitnesses with your condescending views about their observational skills. Why don't you just say what you want to say and call some of them liars instead of nonsense about otters, seals or deer? We can concur with you if such observations were made at a mile away or for two seconds or in fog or heavy rain. But then again, no one is going to see an otter at a mile away. Sixty feet? That is a different matter.