I came across this old documentary from 1976 called "Mysterious Monsters" which was narrated by the well known American actor, Peter Graves, of "Mission Impossible" fame. Funnily enough, it was another actor from that program, Leonard Nimoy, who also narrated the similarly themed "In Search Of ..." series.

Actually, the documentary itself concentrates mainly on Bigfoot, but there is a nine minute clip near the start of the hour and a half film that talks about the Loch Ness Monster. It starts about 8 minutes and 50 seconds in but click on this link to go direct to the Loch Ness part. 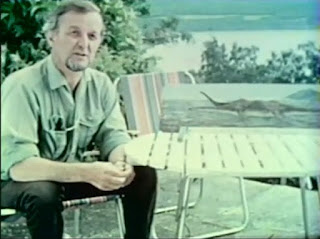 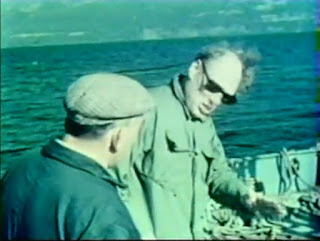 In it you will see clips of Tim Dinsdale, the Loch Ness Investigation Bureau, Roberts Rines and his team at work and that perennial eyewitness, Father Gregory Brussey, from Fort Augustus Abbey talking about his long necked sighting. The snapshot of Dinsdale above shows him with his model monster which I have seen in films and books multiple times. I wonder if it survives to this day?

Good fun although a bit dated. The documentary itself typifies a more dynamic, mysterious and romantic age for these things. I remember as a kid in the late 1970s regularly going into one of the main bookshops in Glasgow to be confronted with row upon row of books on mysticism, monsters, ghosts and UFOs. This filtered through to TV, newspaper and magazine articles which abounded. I have some to this day including the 150 plus issues of the very popular "The Unexplained" magazine which I religiously bought from my newsagent every week. In some sense, it was exciting times, something to distract oneself from the troubles of that turbulent decade.

It was a generation of people exploring the weird and wacky but go into a bookshop today and you behold a different scene. Those books are gone but they are now replaced with a similar acreage of tomes on popular science and scepticism. You are not likely to easily find a book on the Loch Ness Monster. Such is the shift in culture after a span of thirty years. I wonder what the popular titles will be to excite the imaginations of men another generation from now?

The fame of the Loch Ness Monster spreads far in place and time and Germany is no different as a country that loves a good mystery. The title is how I think the Germans label Nessie, I may be wrong (I did French at school). However, there is one little episode that caught my eye as I perused the newspapers of old some time back. I came across this article below from the the Courier-Mail of Queensland dated the 3rd of April 1934. 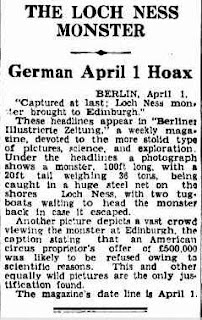 
These headlines appear In "Berliner, Illustrierte Zeitung," a weekly magazine, devoted to the more stolid type of pictures, science, and exploration. Under the headlines a photograph shows a monster, 100ft long, with a 20ft tail weighing 30 tons, being caught in a huge steel net on the shores Loch Ness, with two tugboats waiting to head the monster back in case it escaped.

Another picture depicts a vast crowd viewing the monster at Edinburgh, the caption stating that an American circus proprietor's offer of £500,000 was likely to be refused owing to scientific reasons. This and other equally wild pictures are the only justification found.


Now hoaxes are not unheard of concerning the Loch Ness Monster, but one from Nazi Germany adds a little bit more grist to the mill. That date of April 1st 1934 has already been suggested as the actual date the Surgeon's Photograph was taken, but certainly the editor of the Berliner got there first.


By a stroke of luck, I managed to find one of the hoax photographs that the Berliner had concocted. I found it in an old issue of The Scots Magazine and it is here below. I would love to see the other pictures that are mentioned in the article, but nothing as yet has turned up. 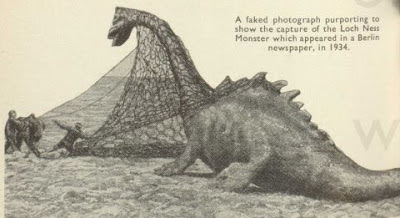 As far as Nazi Germany was concerned, not much more is mentioned in the literature. That may be partly due to the language barrier as the vast majority of Loch Ness researchers speak English (the one notable exception here is Ulrich Magin who has made some good contributions to the Loch Ness story - great if you could email me at lochnesskelpie@gmail.com).

Indeed, as wartime austerity and fuel rationing set in, Highland tourism dropped and so did Loch Ness Monster reports. Add to this the demand for column inches on the war effort and we have little from any country on Nessie. In 1940, Joseph Goebbels, the Nazi Propaganda Minister, wrote a double page piece for the Hamburger Illustrierte which espoused that the Loch Ness Monster was the invention of the tourist trade and that a nation which believed in such nonsense was so monstrously stupid that they could not win the war.

Looks like he was wrong on both counts. I guess he was just jealous because Germany had no lake monsters. Scotland must have more lake monsters per head of population than any other country, but I wouldn't swear to that as Ireland might have a claim.


A year later Mussolini's paper Popolo D'ltalia claimed that bombing of Britain had been so  successful that the Loch Ness Monster had been killed by a direct hit. An Italian bomber pilot had apparently seen the body of the stricken creature. Subsequent post-war reports of the creature proved he must have mistaken an otter in a heat haze or a flock of mersanger birds for the great beast!

For indeed, in 1943, Commander Russell Flint was in command of a motor launch as it made its way south towards Fort Augustus at 25 knots when:

"there was the most terrific jolt. Everybody was knocked back. And then we looked for'ard. And there it was. There was a very large animal form disappeared in a flurry of water. It was definitely a living creature - certainly not debris or anything like that."

Flint sent this message to the Admiralty:

For which he received a "bit of a blast" when he got back to HQ. Cynics may reply Flint was just covering up some botched navigation. I won't pretend to have all the answers and just class it as an interesting story from those dark, war torn years.