Darren Naish Tells us there is no Loch Ness Monster

The headline from the Daily Telegraph trumpets "smartphones have killed the Loch Ness Monster, zoologist tells festival" as the article continues:

The advent of smartphones proves that the Loch Ness Monster is a myth, a leading scientist has claimed. The ubiquity of camera-enabled devices means the creature would have been photographed by now if it existed, according to palaeontologist Dr Darren Naish. However, the University of Southampton expert on cryptozoology - the pseudoscience of mythical creatures - said the last few years had seen a record low of reported sightings.

The same goes for other “cryptids”, such as the Himalayan Yeti, the Australian Bunyip and American’s Bigfoot. “Everybody has good phones,” said Dr Naish. “You really would think they'd be more and better photos, but the only things that ever have ever appeared are terribly low resolution little blobs in the distance. “I would say that the fact that we haven't got any of the evidence that we should have by now - alarm bells are ringing. “It's all speaking towards the fact that this is a cultural event, a belief system.”

As sales of camera-equipped phones have soared, there have been droughts of several years with no new Nessie pictures, he said. Those that have emerged are unconvincing. Cryptozoologists have taken to calling them "blobsquatch pictures”. The name is a play on “Sasquatch” meant to convey how the purported monster invariably appears as a tiny, indistinct blur.

Most scientists argue it is unlikely that a creature such as Nessie - which purportedly resembles a cold-blooded reptile - could survive in the cold Scottish waters. They also say the 22-tonne stock of fish in the loch would not be sufficient to sustain a population of giant plesiosaurs. Sceptics further argue that if such a creature did or had existed, the bones of its ancestors would have been detected by now. In 2003 the BBC took part in a large search for the monster, including the use of 600 sonar devices, but nothing was detected.


Let us look at the main objection first, which is the only one attributed to Mr. Naish, given it is the only one he is quoted on, and that is mobile phones. I covered this objection five years ago in this article. Whether Mr. Naish has read this is unknown, but I learnt a while back that sceptics and pseudo-sceptics rarely if ever read articles by those who dare to believe in monsters. I guess it must be beneath their intellectual dignity.

Naish says "you really would think they'd be more and better photos". Well, as my previously mentioned article concluded, there are "more" photos of alleged monsters coming forth now. Unfortunately, they are of sufficient distance as to be mainly inconclusive or non-monster. As to the "better", the article concluded you do not get better images using a typical mobile phone camera compared to the traditional SLR cameras with their superior optics.

But perhaps Naish means more pictures that are better than what has gone before? When it comes to objects that appear mid-loch in a typical distance from tourist to water objects, the answer is no. In fact, the quality of the image is worse. But at the other end of the witness spectrum, is it reasonable to conclude that more and better short range pictures would become available?

All things being equal, one may be tempted to answer in the affirmative. But there is a likely cryptozoological explanation for the lack of these "better" images and that is because there are less monsters in Loch Ness. Leaving aside the itinerant monster theory which would explain volatile swings in monster photograph counts, it seems not to have occurred to pseudo-sceptics to consider this sub-theory of the monster. The reason they do not consider the sub-theory is because they have rejected the main theory - there is no Loch Ness Monster. Thereafter, anything else is mentally blocked out.

The idea itself is eminently reasonable. Historic overfishing, pollution, climate change and other factors have served to reduce the biomass of the fish the monster would normally feed on. Less fish means less monsters. Less monsters means less surfacings and less surfacings means less clear photographs. Now whether such environmental factors have served to reduce the population of indigenous fish such as Arctic Char in the loch is a matter of debate. The tonnage of biomass stated in previous studies were performed decades ago. Have they now changed for the worst? Perhaps the recent eDNA studies could help in that regard, but that is a hope rather than a stated fact on my part.

The graph below shows the catastrophic crash in the Scottish salmon and trout populations over the last 67 years.  One wonders how the underlying cause of this depopulation has affected the alpha predators around these waters? 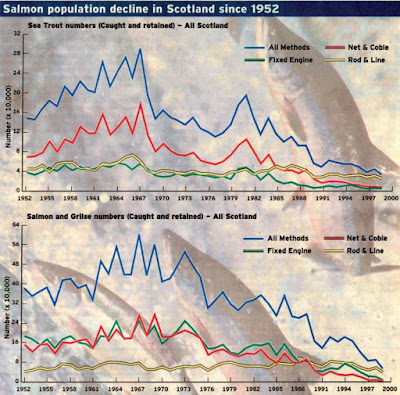 Focusing on the rivers feeding into Loch Ness, we have these graphs from the Ness District Fishery Board since 1952. The first graph is for catches of salmon and the second for trout. It looks like trout have fared considerably worse than salmon. Realising the predicament, the authorities instituted tougher measures such as catch and release to encourage numbers to recover, but what effect has this had on large predators in Loch Ness? What is the tipping point for a given number of such creatures? 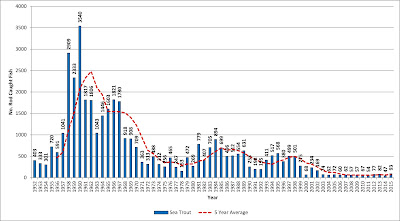 That other large predators have suffered is evident in this population graph of harbour seals around the Moray Firth from the year 1995 onwards where the count dropped from 1300 to less than 850. Seal counts have fared considerably worst in other parts of Scotland such as the east where the count is now a third of what it was. Biologists may debate what the main cause of decline is, but it is naive to isolate larger creatures such as the one of Loch Ness in this overall problem. 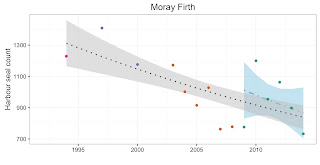 So, we have an alternative explanation to counter the one championed by scepticism. But some other arguments were cited in this newspaper article that may or may not be supported by Darren Naish. The first one cited is "the 22-tonne stock of fish in the loch would not be sufficient to sustain a population of giant plesiosaurs". Needless to say, cryptozoologists are not all plesiosaur supporters. There are other theories which can reduce the required prey to predator ratio.

The oft quoted estimate of 22 tonnes of fish stock is also a fabrication. Yes, studies were done which came up with this approximation, but this was performed on the fish inhabiting the top 10 metres of the loch water column in the pelagic region using sonar counting. It took no account of the eel population in the lower regions or the migratory salmon and trout in the side (littoral) regions. Some journalist did not do his research and any sceptic would do well to avoid leaning on this number too much.

Indeed, one may ask such people how many fish were in Loch Ness in 1833 or 1933 when the monster became international news? I say this because they indulge in the logical fallacy of applying this 22 tonne number not only erroneously today but retrofit it to decades past. To be clear, it is likely there were far more fish in the loch in times past than in these ecologically challenged times when recent studies have been done.

How many large creatures this translates to whether in 1819, 1919 or 2019 is a complete unknown. A study I did on multiple creature sightings suggested a minimum of four creatures - and that was back in  1976. How many are in the loch right now is a number no one can authoritatively state.

Finally, we are told that "in 2003 the BBC took part in a large search for the monster, including the use of 600 sonar devices, but nothing was detected". Now I wish I could watch that documentary again as the memory of it has long faded (indeed I cannot even be sure I watched it at all). However, I am pretty sure the BBC did not use "600 sonar devices". Perhaps they meant 600 sonar beams which in itself is inadequately explained.

Did the BBC sweep the entire loch in the manner of Operation Deepscan (which produced three sonar hits which had moved on when the sites were revisited)? Or was it done in a fragmented, piecemeal manner? Does the BBC finding nothing negate anything else found by other sonar researchers? That is a bit like me looking out the window and stating that if I do not see a blackbird outside, then they do not exist in the area. Well, such is the range of pseudo-sceptical logic.