Every time I see a picture of a gull, I think of the 1982 picture of the Loch Ness Monster by Jennifer Bruce. I wrote about this in 2013 and when I look at such a gull picture, I am less convinced by the sceptical interpretation that it is nothing more than a passing seagull. Let's just say that if that was a gull, it would be so deformed as to be incapable of flying in the first place! 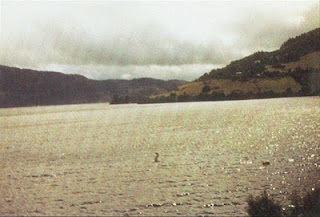 I saw yet another gull in a recent photo and include it below with a zoom of Bruce's Nessie. Compare and contrast. 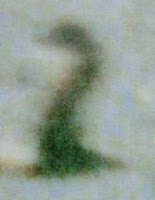 Now whether the bird in the photo is a bona fide member of a gull species seems irrelevant to me. After all, damn! Those are the strangest looking wings I have ever seen on a supposed bird in Bruce's picture. Perhaps it is a weird, cryptid bird like the legendary Thunderbird looking up its watery cousin in Loch Ness?

Quite simply, the sceptics have been suckered into a case of pareidolia here; they see something that looks vaguely like something else. That brings me to a flaw in sceptical logic that is a repeat offence. I call it the "my theory sucks the least" argument and there is normally some fancy Latin  phrase to describe these things, but I am not particularly bothered to find it.

The argument runs like this, the probability of there being one or more large monsters in Loch Ness is approaching zero. So it is not a valid explanation for things we see in photos and films from Loch Ness.

However, since one wishes to look authoritative and intelligent, some kind of explanation needs to be offered as to what is in the picture. Now since any explanation that looks half plausible is going to be more probable than a monster one, it is therefore a probable explanation - use it.

Since the majority are not going to criticise this approach, people will generally get away with it - until they get shot down (like a gull) on this blog and others. So, you declare Bruce's photo is a bird. What do you mean it doesn't look like a bird on closer inspection!? It's more probable than a monster, so that's good enough for me!

This "my theory sucks the least" approach is found all over the place. Another example was Maurice Burton's explanation of the Surgeon's photo. He said it was an otter in the act of diving. It's a daft explanation, but it sucks less than a monster one, so we're cool with that.

I see it all time to varying degrees of dubiety. That does not mean that people do get it right on various pictures (e.g. Steve Feltham outing George Edwards or Alistair Boyd on the Surgeon's Photo), but some others attempts are just ... embarrassing.