The Motives of Marmaduke Wetherell

There is one aspect of the Surgeon's Photo Hoax theory that has always puzzled me and that was motive.

If we go back to the 1975 newspaper clipping that started Alastair Boyd's investigation we get an insight into why it is alleged that Marmaduke Wetherell faked the photograph. According to his son Ian in that clipping, the Daily Mail had gone cold on Wetherell's expedition and had dropped it much to his father's chagrin.

In response to this, Ian quotes his father as saying "All right, we'll give them their monster". This was all meant to set in train a chain of events leading to the pictures being offered to the Daily Mail via the link man Kenneth Wilson.

All perfectly plausible, but wasn't something meant to happen next? You get the cold shoulder from the Daily Mail, you fake a photograph and sell it to them, they get the media sensation of 1934 and the rights to the iconic image of Nessie for decades to come. Was that the intention of Marmaduke Wetherell? Did he plan to give the Daily Mail the glory of the best picture of Nessie ever?

Somehow I do not think so.

I don't read in the Boyd/Martin book what Wetherell planned to do once the picture was published but it is not hard to guess. The most reasonable explanation for all of this was revenge. He would fake the picture, wait until the Mail was basking in the glory of it and then expose the picture to a rival newspaper. Thus the Mail is jeered across the nation and Wetherell dies a happy man.

Quite clearly this did not happen and I am not the first to question the whole alleged motive because of this. If Wetherell did not follow through on his plan - then was there ever a plan? Now at this point we again enter the realms of speculation because all the main protagonists in this story are dead. When an explanation is offered for something (i.e. the photo was faked for revenge) but these discrepancies appear then the supporters of said theory are obliged to come up with some explanation even though it may not be the probable one.

So why didn't Wetherell apply the Coup De Grace? Why did he snatch Defeat from the Jaws of Victory? He died in 1939 so that gave him about 5 years to finish the execution of the plot but in my opinion the best time to strike was when the iron was hot and the picture was experiencing high publicity in 1934.

So what could have gone wrong for Wetherell?

1. Did he perhaps approach rival newspapers but they refused to take the bait? Hardly likely considering the ribbing other papers gave the Mail over the hippo tracks Wetherell "found" (see Boyd/Martin book).

2. Had he perhaps intended Wilson to come clean but then the good doctor got cold feet? Possibly, but why not then do it himself or one of the other plotters such as Chambers? Surely our intrepid game hunter would not let the prey escape so easily?

3. Was he perhaps afraid of his reputation being panned if he declared himself? So why didn't he confess when he knew he was dying of cancer with nothing to lose?

Whatever explanation is conjured out of the air, this is another question mark will hang over this story. The motive was revenge but revenge was not applied despite Wetherell's great desire to do so. It is all rather like watching a movie where the plot is going along well but at the very end the crooks don't get caught or the lovers do not live happily ever after. 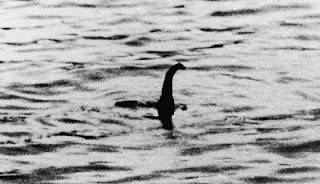 And while we are on the subject of that 1975 newspaper article there was one or two points made in it that made me think. The relevant text is this:

"Then it was just a matter of winding up the sub and getting it to dive just below the surface so the neck and head drew a proper little V in the water. I took about five shots with the Leica, then suddenly a water bailiff turned up. I suppose he had heard voices and thought we were fishing. Dad put his foot on the monster and sank it, and that was that."

Now this matter of trying to produce a V-wake is contradicted by the actual photograph above which evidently shows a stationary object with no wake and rather a concentric ripple around it indicating the opposite.

Furthermore, we are told by Ian who was actually claimed to be there (as opposed to Spurling who allegedly made the model but did not go to Loch Ness) that the whole session did not last hours but was interrupted in which time five shots were taken as the submarine went "just below the surface". Why is this important? Because it makes no space for that troublesome second Surgeon's photograph to be taken. Again, that photo is unaccountable by this hoax theory.

Do I have any conclusion regarding the whole matter? There are inconsistencies in the story which a good lawyer could get an open verdict on if there was a "Nessie Inquest". I won't say Christian Spurling and Ian Wetherell were lying but neither could I say they were truthful. There are questions which leave me asking questions but I would have to find a real motive for why they lied. I won't pursue that line for now but neither will I let the matter lie there.

For now, digest these thought on my blog of the last weeks and draw your own conclusions.
Posted by Glasgow Boy at 13:22 16 comments: