A Nessie Photograph from 2015?

Here is an interesting photograph that has turned up in the media this week. The story from the Scottish Press and Journal goes as follows.

An American mother has turned up a mysterious image of Loch Ness by trawling through Google Earth shots taken three years ago. Lisa Stout’s startling discovery has now been accepted as the ninth sighting of the monster this year by the Official Loch Ness Monster Sightings Register – and further highlights more and more people are hunting Nessie around the world through the web. Ironically the 31-year-old from Bellevue, Ohio, has a monster – “Bessie” – on her doorstep, but has never seen it. According to Google there are 200,000 searches each month for the Loch Ness Monster.

“As a result of a recent loss of employment, I’ve had a lot of time open up. I had been searching for Nessie on/off for the past few weeks, spending an hour or so a week on Google Earth as well as other places I like to visit in the App,” said Ms Stout, a mother-of-one. “I had seen some of the latest Nessie sightings and thought that I can definitely find a better image of her than that which I used for motivation to challenge myself to find her! Last Thursday at 9.45am, I had got my daughter off to school and began to search for Nessie when I noticed a cluster of pictures taken by an Underwater Earth Contributor all in one area near the Loch Ness Highland Resort in Fort Augustus."

“I noticed what I believe may be the creature known as Nessie – or at the very least what makes up for most of the accounts of Nessie sightings that residents/ tourists are seeing and reporting.”


Ms Stout said she believes the dark figure protruding from the water is “at least three to five feet tall which I believe to be is Nessie’s neck and it also appears rather flat giving the neck a width of at least one foot.”

Gary Campbell, the recorder and keeper of the Official Loch Ness Monster Sightings Register said: ”This is a really unusual phenomenon and our panel can’t explain what Lisa has spotted therefore we are listing it as a sighting. However, it may be that by doing this, someone else across the world can come up with an explanation. “The great thing about it being on Google is that anyone with access to the web can go on and see exactly what Lisa has captured and then make their own mind up. This means that once again, you don’t have to come to Loch Ness to be a Nessie spotter.”


A zoom in of the object is shown below and, going by the Abbey steps to the right, I estimated the height of it as something below 3 feet and various theories as to its identity have already made their way onto cryptozoological forums: 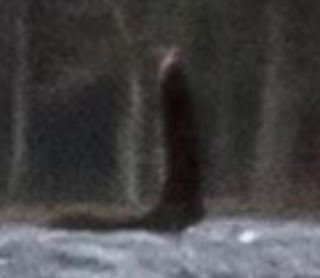 The log explanation naturally leapt to mind although I find it a rather odd looking log compared to the ones I have seen at the loch or in pictures, plus it looks rather dark for a log unless there is strong sunlight to the left which I doubt considering the rain which appears to be impacting on the loch surface. However, nothing else is as black as this object in the picture. Nevertheless, such a theory cannot be totally discounted.

The opinion that it is a diver requires further explanation, namely what part of a proposed diver are we looking at? That is not clear to me. However, a diver's suit may have been as dark as this object. A piece of debris on the lens seems a big coincidence as the object is lying very nicely aligned with the water surface. Photoshop also seems unlikely as I went to the Google Maps website to retrieve the original image.

The bird in flight suggestion has some more merit if one imagines the "neck" is the right wing of the bird and the "body" in the water line is the left wing. In this scenario one would assume the head and neck of the bird are obscured by the right wing. The left wing looks a bit thin and I see no tail feathers, but the idea has more merit than most so far.

Or it could be the Loch Ness Monster, but that begs the question as to why the crew did not see anything at the time? At least, we are never told they did, but if they did I would expect something more than this. That aside, the neck length to width ratio is a bit lower than I would usually expect for the neck morphology. that is, it is a bit on the thick side. I wouldn't want to dogmatic on such a ratio though.

All in all, a curious picture which doesn't quite bow down to any one explanation.