Loren Coleman has informed the cryptozoological community of the death of Barry Blount at his news website. I had been in correspondence with Barry a few times over his love for the Loch Ness Monster mystery.  By the time he had touched base with me, he was living in the province of British Columbia involved with the various cryptids in that part of the world. Now, if I had to leave Scotland, the beautiful province of British Columbia with its Sasquatch, Cadborosaurus and Ogopogo would be a pretty attractive option. Perhaps I'll get there one day.

Barry told me of an experience he had with Nessie once while pursuing the beast with a friend back in 1964. I published that account on this blog in 2013 and you can read it here. Barry also communicated some ideas to me including a novel one on the Lachlan Stuart photograph. You can read his document on that here.

Once again, rest in peace, Barry.

As the title says, this is the five hundredth posting I have made to this blog since its inception. Also, if this blog manages to survive another six days to reach the 18th July, that would mark six years of blogging on the Loch Ness Monster.

Now I recall years back when this blog was bright eyed and bushy tailed that somebody of a sceptical persuasion suggested I was wasting my time with such a thing and should employ my talents elsewhere (perhaps being a sceptic?). That advice was declined and I am glad I did it as the website has gone on from strength to strength.

The visits to the blog began slowly enough, but now it enjoys thousands of hits per day with Google ranking it high on a search of "loch ness monster". Sometimes the blog manages to rank as high as third (below), most of the time it is lower down as it competes with the latest Nessie stories from the more popular pages of the mainstream media. But the main thing is that it has a presence that ensures the alternate sceptical view is not dominant. 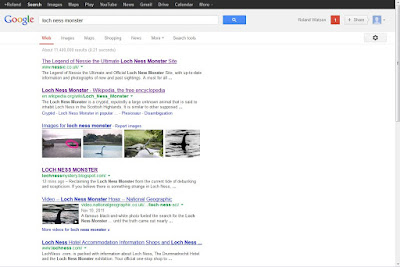 But, as said before, that is not so much as a matter of boasting but rather the recognition that people find what I do interesting enough to revisit the site on a regular basis. I am happy to oblige them as I find the whole subject of the monster a fascinating business myself, bolstered by the fact that I continue to believe that a real creature of monster proportions inhabits the loch.

And I would say that I increasingly believe that proposition to be true as I have re-examined old monster reports, films, photographs and looked at them from a fresh perspective. Classics such as the Hugh Gray and Peter MacNab pictures have gone up in my estimation as have others.

This also includes reports from sincere and experienced witnesses who bolster the argument despite the withering attempts of sceptics to put down witnesses and portray them as incompetents and liars. I have spoken to some of these people myself and I do not get the impression that they are fools who can't tell a bunch of birds flapping about from a large, dark hump bigger than anything known to be in the loch.

The strap line at the top of the blog to reclaim the monster from the current tide of scepticism has included reviewing past eyewitness testimony as well as critiquing not so convincing sceptical theories. Those arguments are laid out elsewhere, but as time has progressed, I have increasingly seen their ideas as hollower and hollower.

If the idea of a colony of aquatic dinosaurs can be seen as naive, then the idea of boat wakes, birds and logs solving the mystery is simplistic to say the least. The solution lies in between and as you can see in the picture below, there is no lack of candidates! Each theory has its shortcomings and therefore the search continues. 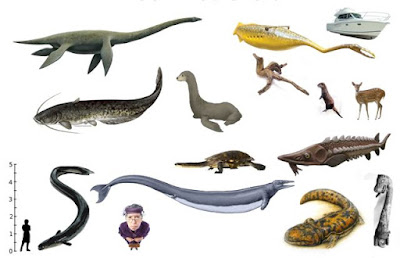 This has led to conflict, especially when the comments section of the blog was left open to all and sundry. That left the door open to sceptics who, when they lacked a rational argument, resorted to ad hominems. Admittedly, those on the other side of the debate were not averse to the same approach, so now that part of the blog is tightened.

You still get the odd nutter sending glib and insulting comments. They even pose as believers and say solemnly that my own arguments have convinced them there is no Loch Ness Monster! These get binned and never see the light of day.

One sceptic even said that restricting comments would send web traffic down so much the blog would die. Since that comment was made, web traffic has doubled. The problem with sceptics was that they valued their comments higher than the content they were trying to discredit. Sorry guys, we're here for the Monster, not you.

Of course, the blog is not all about sightings. We have discussed theories, folklore, cultural and media representations, the people and personalities behind the whole mystery, book reviews, upcoming events, my own trips to the loch and other mysterious beasties from around the world. It's all there and if it isn't, I hope to include it in the future!

As ever, there is a backlog of subjects to address, investigate and write up. This is a subject that just keeps on giving as new reports and photos roll in, old material comes to light or a new angle is found on an old subject. While other websites grind to a halt, rarely update or just try and present tired, sceptical opinions as objective data, I will aim to continue to provide more material on this centuries old topic.

What is the conclusion of the matter? Someday this blog will have a final entry and I would like to think it would be a welcome message completing the circle on the first post back in 2010 as it introduces the website and directs future enquirers to the various sections.

But when that end is near and faces the final curtain, the record will show that I did it my way and not the sceptics' way!

Thank you for your support.