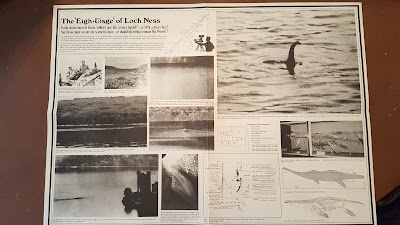 I spotted this Nessie poster on eBay last week and bought it for about a fiver. I think people are more likely to call them infographics these days, but I had never seen it before and so it joins the Loch Ness Monster memorabilia collection that has grown in size over the decades. It is entitled "The Eigh-Uisge of Loch Ness" which is a reference to the old Gaelic for "Water Horse".

The text of the poster looks like it has the influence of famed monster hunter, Tim Dinsdale, all over it as he is quoted on the mystery, two frames from his 1960 film and the artist's impression of the creature looks like it is taken from his works. The 1972 flipper photo and sonar graphics are included but not the subsequent pictures taken by Robert Rines and the AAS from 1975. To that we can add the classic MacNab, Wilson and Lowrie pictures.

In answer to the question, "Where is your scientific evidence?", Dinsdale tells us it was a question no one would bother asking by 1973. Unfortunately, he did not see what would come to pass as the sceptical era ensued within a decade. What exactly Tim was thinking prior to his death in 1987 was probably more sanguine, albeit still positive towards there being a monster in the loch.

Everything you see in this poster has been panned by the sceptics, I agree with some of it, but not all. The poster is a product of its time and would look a lot different today. But where did this poster come from? The answer came from noting that the copyright lay with Canon Records. A quick Internet search revealed this poster was an insert for a vinyl LP record pressed in 1975 entitled "Come to Scotland".

This was a collection of traditional and popular songs from Scotland which was a promotional tourist item. Yet alongside "I Love a Lassie" and "Flower of Scotland" was a poster about the Loch Ness Monster. Well, it was something designed to get people to visit Scotland, but it seems a suitable song about the monster was harder to find. The LP is described at this link.

On the general theme of Loch Ness posters, the classic one for me is still "The Facts about Loch Ness and the Monster" first published in 1977. The folded product unfolds into a nice 3-D map of the Loch Ness basin surrounded by various images and text boxes. 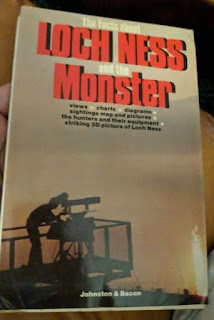 Around the same time the first poster was produced was another which I have owned since 1975 and that was simply titled "The Loch Ness Monster" published by Phoebus. This expanded into a large poster of Sir Peter Scott's well known "Courtship at Loch Ness" painting. It also included the Wilson and Flipper photos and two of Frank Searle's productions. 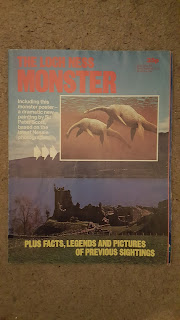 Moving on, we have another item called "Loch Ness - An Illustrated Guide" which is a simpler item and has more to say about the loch and its sight with a section for the monster. This has no sensational photos of the creature and I would date it to around 1970. 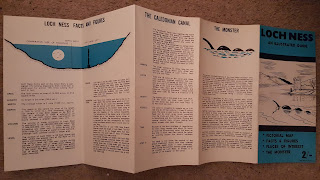 Another poster which came to light after the first version of this article came from David from Canberra, Australia. He told me he bought this A2 sized poster back in 1977 published by the Aberdeen Press & Journal newspaper called "The Strange History of the Loch Ness Monster". He sent me a picture of it included below. Like the poster above, it also features a 3-D type map of the loch and shares some of the well known photos but includes the 1975 AAS pictures. The text is fairly standard stuff but I wonder about that Peter Scott like rendition of Nessie but with a flared newt-like tail? 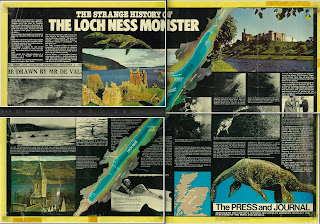 Finally, it is no surprise that Frank Searle got involved in this type of product as he had a portfolio of monster pictures that were ideal material for a poster. So he collaborated with a Graham Forbes and the result was entitled "Loch Ness - The Hidden Facts" and is shown below. I thought I owned this and then I recalled I balked at paying the eBay price of thirty quid. Perhaps I was wrong, but I copied the images on the auction for future use. 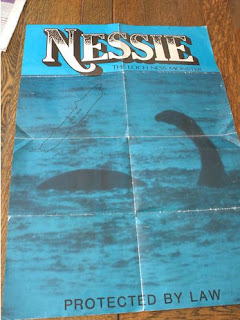 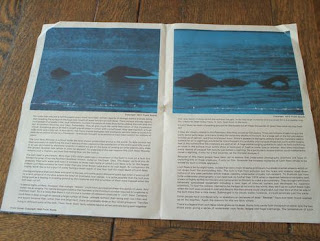 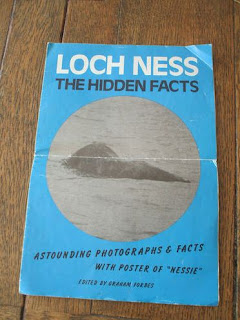 If you know of any other poster products from the 1970s or any other time, let me know.