Is the Loch Ness Monster a species of animal that is not only beyond the reach of identification but also beyond the reaches of this planet? In the latest of our series of articles on "What is the Loch Ness Monster?", we come to possibly the weirdest one yet.
The question will naturally arise as to what grounds one would base such a claim upon. I personally have none but we like to look at all theories on this blog whether they are considered respectable or not. However, it was a comment by a reader recently that proved the catalyst for this article. He had said that it was the higher strangeness sightings that he was mainly interested in and this got me thinking for there was a story that was dimly in my memory.
It involved a person who claimed they had had an extraterrestrial encounter with the Loch Ness Monster. and for the life of me I could not remember the source of the story.  As it turned out, my years of teenage research into UFOs and other strange phenomena proved worthwhile as I had kept some notes and that story was there. It involved a man called Ted Owens and was related in a book called "UFO Trek" by Warren Smith. The author had included snippets of an interview he conducted with Ted Owens who was a "contactee". Owens claimed to be in contact via telepathy with extra-dimensional beings he called the "Space Intelligences" and also claimed they had given him special psychokinetic abilities to influence such things as the weather. The relevant part of the interview is quoted below: 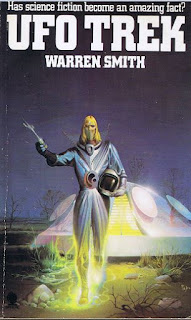 Smith: I understand you were in Scotland and found out something about the Loch Ness Monster. Would you share that with us?

Owens: I went over there to make contact with the SIs. They sent me on a mission and Loch Ness was one of the places I was to visit. It was the dark of night, just after midnight, when I stood on the shores of the lake. That's when the monster came up out of the depths and surfaced. It wasn't more than twenty or thirty feet from the shore. It stared at me and in the moonlight I could see a long neck, about eight inches in diameter, and a small head. The head was about the size of a football. I communicated with the creature. It is from another dimension and has a link with the SIs. The monster does not die because it does not have a life system as we understand it. Actually, there is more than one such creature in the Loch.
I would presume this alleged incident took place in the early 1970s. Quite a story as you can imagine but what shall we make of it? In more ways that one, the extraterrestrial Nessie theory is similar to the Paranormal Nessie theory. It solves such questions as food supply and elusiveness. In this very quote, the creature is implying it has no need of whatever is in the loch for nutrition and the question of elusiveness is further answered since there is a presumption that its obvious intelligence and other abilities makes it decide whether to put in an appearance before those incredulous humans.
But then again more questions arise than answers. After all, it is a contentious subject whether alien life forms even visit the Earth today, let alone leave other such lifeforms in lakes around the world. The natural assumption is that dropping an extraterrestrial creature in a foreign world would probably not work out ecologically and biologically as out of place creatures tend not to do well outside of their natural habitats. But then again, these are highly advanced aliens, so they have presumably solved that problem (Note: Owens claimed these Space Intelligences were extra-dimensional and composed of light and energy, so not quite the traditional visitors from another planet).
Why the creatures are even in a remote Highland loch is not answered and the fact that this creature is intelligent and perhaps even telepathic stretches credulity further. If one believes in alien visitors (and there are may who hold to that view) then it is perhaps not such a leap to believe they may have placed other lifeforms in earthly locations. However, for others, Ted Owens may have been better advised to have held back at this point!
But there is one area of the Loch Ness legend which does chime with this story and that is the old Water Horse tales. The Loch Ness Kelpie was described as intelligent as humans (if not more) and also could communicate with them (albeit verbally). Indeed, in one account from the 19th century, we have the Loch Ness Water Horse engaging a human in conversation on the subject of returning its magical bridle! Was this modern story no more than a continuation of that venerable tradition?
Perhaps it is as we investigate further. We have actually met the author Warren Smith before as he wrote a book on the Loch Ness Monster which we featured in our Loch Ness bibliography. The book is titled "Strange Secrets of the Loch Ness Monster" and was published in 1976. This was my short review of the book:
A book with a back cover which asks some startling questions. Such as is Nessie the relic of a lost underwater civilisation? Is there a connection between Nessie and the Hollow Earth, Bermuda Triangle and UFOs? Best of all, is her picture carved in ancient pyramids?

Pertinent questions to which the answer is a collective "No". As it turns out, this boilerplate book is a general survey of lake monsters worldwide with perhaps a third of its 234 pages devoted to Nessie and other Highland creatures. 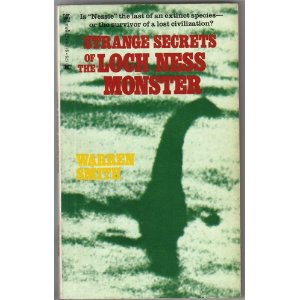 Interestingly, Smith doesn't mention the Owens story in this book and it rather takes the view that the creature may be a giant eel. So did Smith not believe Owen's story or was Owen's story only made known to him after his Nessie book? As it turns out, a biography on Owens called "The PK Man" by Jeffrey Mishlove states that Owens was interviewed by Smith in 1975, so he would have known about it beforehand. Furthermore, Mishlove's book makes no mention of this Loch Ness incident which may be explained below.
I say that because the waters are muddied further in an article on Warren Smith written back in 2007 called "Warren Smith: UFO Investigator or Hoaxster". This article by Tim Banse claims that Smith would fabricate entire UFO stories for his books. The reason given was simple, the money was required to pay the bills and buy Christmas presents for his four kids. The article can be found here.
If Smith did fabricate this Loch Ness Monster story, then it would be clear why he did not include it in his more mainstream Nessie book. But the case is not proven, did Warren Smith or Ted Owens make the story up or did Ted Owens really believe he had such an encounter at Loch Ness one night long ago?
Whatever the truth behind this story, like the Fordyce case it is a statistical outlier and should be treated as such. The vast majority of Loch Ness Monster cases in no way suggest the kind of creature that Ted Owens describes. Until corroborating reports come to light which back it up, it needs to be decisively set aside.

That does not discard our Extraterrestrial Nessie as a theory, it just does not have much if anything to back it up .. unless readers wish to add anything they may know.

Please find below the links to the final set of Rip Hepple's Nessletter. Under Rip's suggestion, the series stops at issue 120 in January 1995. This set of scans is a bit different to previous ones which were image files. These ones are PDF files which were scanned at the National Library of Scotland in Edinburgh which is a twenty minute drive from my house.

The appearance of the scans are also different as my home based scans were done on an A4 scanner which each page completely covered. At the library, the scanners are more heavy duty and can cover much larger page sizes. So when you view a page you will also see some of the surrounding machinery of the scanner.

Also, I was not allowed to separate pages which were fastened by staples, so when the page was folded over, there may be a few words missing which are under the staple fold. If I had more time I would redo the images to exclude the machinery, but at about 400 pages and the fact that no information is gained, I'll leave that to a distant future date.

However, at about 400 pages, one thing I do want to finally add is an index. So at some point I will go through each newsletter adding subjects such as sightings, theories, persons, ecology and so on.

Enjoy the archive and let me know of any issues you may notice.

P.S. I note issue 118 is missing, I'll need to figure out what happened there!