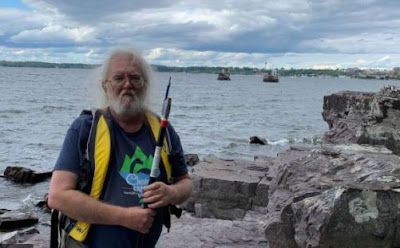 I had gone up to Loch Ness a couple of weeks ago with a new mobile phone with better reception and more data. I will pass on how the previous phone was accidentally dropped down the toilet, never to recover. But this allowed me during those warm evenings in the tent to listen to the podcasts of "The Haunted Sea" by Scott Mardis to which I directed others on my last blog.

Scott picked up on that and messaged me last Sunday about 2am his time to tell me he had touched base with Marty Klein of those 1970s expeditions, hoping to get him on one of his shows. That would have been a great podcast I thought and I replied but never heard from Scott again. Unknown to me, he passed away three days later at the age of 57. I have written one or two tributes to people who have died, such as Roy Mackal, who were well advanced in years, but I did not expect to be typing this in 2021 concerning Scott.

Loren Coleman has laid out the sad circumstances of Scott's untimely death, I will add my own tribute to Scott here. I got to know Scott back in 2014 when I joined his growing Facebook group, the Zombie Plesiosaur Society (ZPS), dedicated to large creatures of lake and sea, be they extinct, cryptid or relevant in some way to that pursuit. I became a co-administrator some time back, but we all knew this was Scott's baby from the start.

Pretty soon we were pinging messages between each other about Nessie, Champ and other hard to get beasts. Scott's enthusiasm for aquatic cryptids was evident through these and his posts on the ZPS. He later branched out into other groups dedicated to his chief quarry, the Lake Champlain Monster. Being convinced that some of these animals may be survivor plesiosaurs (hence the group title), he also branched out into paleontology to expand his understanding of the creature and even worked as a volunteer in the Philadelphia Academy of Natural Sciences' Department of Vertebrate Paleontology. 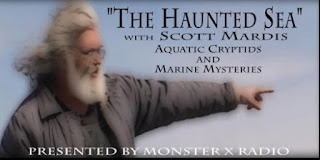 But what keeps a monster hunter's enthusiasm and drive going? Like Dinsdale, Holiday and others before him, Scott saw his monster back in 1994 about a couple of years into his personal quest. I quote from Dale Drinnon's blog:

The date I believe was July 9, 1994 and I was at the waterfront park called Battery Park in Burlington, Vermont on Lake Champlain, purposely watching the water for something with my binoculars (I did not own a camera at the time and could not afford one, as I had recently spent most of my money relocating to Burlington to investigate the "monster"). I had been watching the lake for weeks on a regular basis from this park as it was easy to access and had a wide view of one of the deepest parts of the lake. The park was sparsely occupied at the time and I was sitting on one of the benches facing the water. Around 11 a.m., a large object bobbed to the surface and remained stationary for a few seconds. It was very far out into the water but I had a good view of it with my binoculars. I later estimated it’s size by comparing it with a boat I saw afterward. I believe it was about 15 feet long and about 4 feet high.
It was a large mound-like object with a smaller mound-like object rising up out of the middle of it. It kept this configuration for a few seconds, then turned to the right, with the smaller mound-like object taking on a different profile and then oriented on the right side of the larger mound (as pictured below). The full object began to swim or move to the right, with the smaller object making a rocking motion as this was happening. The smaller object could be interpreted as an appendage of some sort, possibly a head on a short neck or a flipper. The whole thing briefly swam a few yards to the right, then promptly sank vertically and I did not see it again. The entire incident may have lasted something like 30 seconds, if that. I did have a very good view of it through the binoculars. The object was a greenish-black, "garbage bag" color, reminiscent of a leatherback turtle. 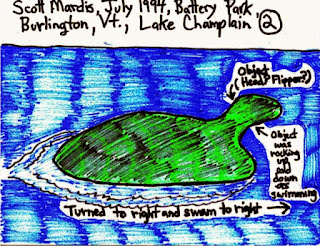 When you go out seeking to hook the monster of Lake Champlain or Loch Ness and see one, it actually hooks you and reels you in. What kept the likes of Scott, Dinsdale and Holiday going? They saw something they couldn't explain and they were determined to get more. I have a desire but also a fear of seeing the monster. Not because I expect it to attack me, but what effect it would have on my lifestyle. Would I become more determined to find out more or would it become an obsession that takes control? I hope more of the former as Scott did. He upped the ante and kept going back every year to find the clinching evidence for Champ.
In that respect, Scott taught me a few things. I am pretty much a landlubber when it comes to Loch Ness, but Scott ploughed into the waters will all manner of schemes and devices. Boats, sonar, hydrophones, underwater cameras, underwater speakers and diving. In fact, I am pretty sure that is not an exhaustive list, and I have not even added the land based stuff. Some interesting acoustic and sonar hits were made to add to the panoply of evidence, but like Nessie, Champ remains a stubborn target to pin down.
Back in November 2019, I flew over to Orlando in Florida for a holiday. Yes, we did the usual Disney World stuff and so on but Scott lived over on the west coast in Bradenton and I reckoned this may be my only chance to meet up with him. So we did the two hour drive over and followed Scott's directions into Bradenton. To my surprise, we turned into a mobile home park and Scott directed us into the parking bay by his modest caravan-type home. I guess I am just not used to seeing such a thing in Scotland.
He lived there with his wife, cat and dog in humble surroundings that actually made me admire him all the more given his obvious lack of resources. We went out to a Chinese restaurant and talked monsters and I still have the toy Champ he gave me as a souvenir of our visit. It sits between some Nessie books in my study. The visit ended as we needed to get back to Orlando for nightfall and I said my goodbyes to Scott. As it turned out, it was not my one chance to see Scott, but my last chance.
Four months later, the coronavirus pandemic swept across the world, shutting down non-essential travel across countries and continents. I had taken my chance and seen Scott before his untimely death. So, Scott, thanks for the chat, the interviews with you on your podcasts, the information and insights you gave me and the friendship.
Rest in Peace, Scott Mardis.
The author can be contacted at lochnesskelpie@gmail.com