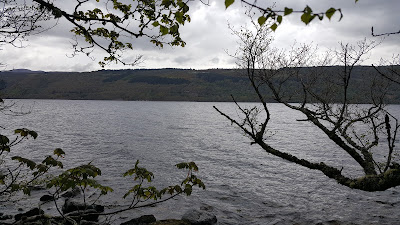 Things had to be shorter this time around at Loch Ness, so I resolved to jump in the car and head up north about 8am, arriving at Inverfarigaig just over three hours later. The Scottish Government had lifted the coronavirus lockdown a few weeks before allowing travel across the mainland for most everyone. The weather was overall pretty good, considering more rain was forecast.

The first and main task was to pick up the various trap cameras that had been surveying the loch since September. Now is generally a good time to take them back home before the tourist season gets in full swing and various kids and so on begin to explore the fringes of the lochside. When I got back and reviewed them, it was evident that one problem had been solved.and that was the issue of high trigger wave events.

Basically, trap cameras were not made for looking at shorelines, they were made for viewing trees and fields.  Any decent incoming wave can trigger the camera and this can go on for days, taking hundreds of pictures a day until the memory card is filled up in a few weeks and the camera shuts down with five months of surveillance still left.

The only viable solution was to set the interval period between triggers much higher. This is the period of time when the camera turns off monitoring for the specified time. This used to be one minute, but it is now set to sixty minutes. That means a maximum of about 36 pictures per day (three per trigger) or 7500 over seven months. As it turned out, the most was about 2,000 on one SD card, since a lot of days are quiet with no triggers.

Of course, this means a compromise or trade-off as the creature could swan past during one of those sixty minute intervals and we would be none the wiser. However, I think that is better than 10,000 pictures of waves over four weeks and then nothing. As it turned out, the multitude of images checked revealed nothing of a cryptid nature, another blank drawn this season past. But this should not be a surprise.

Again, consider the odds we are fighting against. The cameras can trigger on boats, canoes and surfers up to 20 metres away. An arc of sensitivity of about 120 degrees gives us an sweep area of  about 420 square metres. But how big is the surface area of Loch Ness? The answer is about 56,000,000 square metres. So if we say the creature randomly surfaces once a day (an average 12 hour period of daylight), the odds of it surfacing in our arc of detection is 133,333 to 1 against.

Let us say this single per day surfacing proceeds over six months of surveillance or 182 days. The odds then drop to a mere 732 to 1 against. In other words,you still don't bet the house on it. If you have five cameras on the lochside simultaneously, then the odds drop further to 146 to 1 against. The overall impression you may get is that in 146 years, you will finally get the clinching photographs. Clearly, I am not going to wait around that long.

So, you either massively increase the camera count or be more strategic in where you place the cameras. Increasing cameras is a task proportional to the number of cameras. There comes a point where it becomes too cumbersome, but there is no reason not to increase them by some reasonable amount. Strategic placements may prove a more valuable tactic.

For example, where the cameras currently get placed may be less conducive to monster surfacings if they are over too shallow waters. Perhaps it is more likely to snap the creature over an area where it shelves more rapidly. Or perhaps beside the mouths of rivers where fish congregate and the monsters have long been held to seek out such prey? There are various possibilities, but for now I was limited to snapping passing objects such as these below. You can see from the height of the person that a ten foot hump would occupy a very desirable quarter or more of the horizontal line of the image. 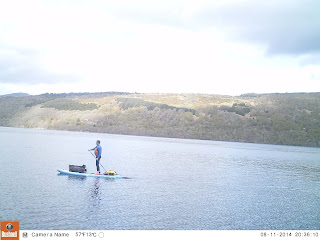 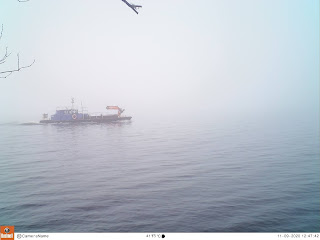 Having collected all cameras safely, I indulged in some good old fashioned monster hunting by watching the loch for that disturbing of the water that could signify something large and alive was stirring. I then drove over to Foyers Power Station to walk around that area, taking in the old Frank Searle site, the 5 Megawatt Power Station and the discharge of water from it that creates a swirl of colliding water as it enters the loch further along. A walk nearby on the spit of land at Foyers Estuary allowed some beach combing and thinking ahead to the next visit.

After this I drove up to Dores and walked along the southward beach again watching, musing and scouring as the sun came out to shine upon us. I stumbled upon some anglers and chatted as I watched them land a decent sized brown trout. Looks like dinner was sorted out. I asked jokingly if they had tried to land anything of monstrous proportions. Hmm, nothing like that! But no fishermen stories of the big ones that got away, no outsized eels either.

I then walked up the beach to say hello to Steve Feltham at his home on the beach. I complimented him on getting that big story on the sonar contact into the media and we discussed that and its implications for a while. Despite the obvious drawbacks of Covid-19 on the area, it had actually been a good year for Steve in that the area was a lot more peaceful. I could understand that right away as some mopeds drove to within a few feet of us, you could hardly hear yourself think!

I would point out that Steve must be almost at his thirtieth year at the loch since he arrived in 1991. So well done to him on the continued search at the loch. With that, I had a spot of dinner at the Dores Inn and then motored back down south to Edinburgh. I hope to be back at the loch no later than August and for longer than just a day trip.