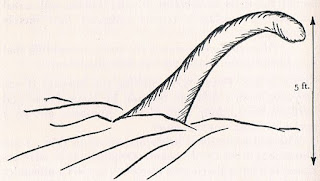 I was drawn back to this classic sighting of the Loch Ness Monster by a recent e-clipping I got from the Scottish Field magazine dated 2nd June 1934. In that journal, Mr. Russell wrote to the editor describing his sighting and which appeared in the Letters column. There are several sources for this account, but this one is primary being in the witness' own words and is reproduced below.

The following is another letter from an eyewitness.

SIR, - on the morning of  Sunday. October 1st, 1933, I had taken my dog out for a walk across the rocky knolls that lie above the south-west corner of Loch Ness. I had previously heard a good deal about the large creature that was said to have taken up residence in the loch and, after a period of complete scepticism, was, at the time, inclined to the belief that some large marine animal, probably a very large seal or a small whale - had entered the loch, the general descriptions, I had heard of it as resembling an upturned boat, more or less pointing to one of these. I had, it is true, also heard stories about the creature as possessing a long neck and resembling an enormous eel but, having been unable to verify these descriptions, I did not, at the time, attach much weight to them as I knew of no creature that would answer to the description given. I was thus quite unprepared for what I was fortunate enough to see.

On reaching a high rocky point about 300yds from the water's edge I saw a huge neck and head extended from the water about 800 - 900yds, from where I was standing and about 400yds. from the waters edge. The creature was moving slowly and steadily towards the southwest, that is, at right angles from left to right across my line of sight. Its progress continued, more or less in a straight line, for twelve minutes (timed), after which it sank almost exactly half a mile from the point at which I had first seen it.

Conditions for observation were, as nearly as may be, perfect. The loch was dead calm and the water pale grey. There was no shimmer or glare from the water. The sun was shining from behind and to the right of the creature so that head and neck were visible as a dark silhouette against the pale water.

The head was small compared to the thickness of the neck and, so far as could be seen at a distance, wad rounded or oval, not angular. It was not set on the neck at a distinct angle, but appeared more or less as a continuation of the neck slightly thickened. It was carried well forward and was, I judge, about 5ft. clear of the water. The neck was serpentine and carried at an angle to the water, not upright. It tapered a good deal, being distinctly thicker at the water's edge than just behind the head. At the distance it was, of course, quite impossible to make out any such detail as eyes or mouth, as I had no glass with me. But the general appearance of head and neck was smooth. I am satisfied that, had there been any conspicuous appendages, I could not have failed to see them as some irregularity in the outline.

No sign of a body was visible, but the creature left behind it a V-shaped wake which was very noticeable on the flat water. One or two seagulls were in attendance on it, swooping down and circling round it. I could see the gleam of their wings they wheeled. The progress of the animal across the water was smooth, without any up and down motion but, so far. as could be seen, with a sideways, swaying action. From time to time it turned its head and neck from side to side. The head did not seem to pivot round on the neck but the whole head and neck swung round together.

At its nearest it was, so far as I can judge, about 700yds. from where I stood, and when it sank it did so quietly, making no great disturbance in the water. After it disappeared, I went home and returned with a telescope but failed to see any further sign of it. I was very much impressed by the size of the mass of the head and neck which I saw and concluded that, to maintain so much clear of the water, the body must either be very bulky or exceedingly long.

I should add that all measurements of distance have been checked, so far as possible, from the O.S. 6in. map, that my estimate of the creature's head is based on a comparison with the height of a man standing in a skiff and that the period during which I actually watched the head and neck was timed accurately.

As to the identity of this strange inhabitant of the loch the only thing of which I am satisfied is that none of the "explanations" which I have I seen in the Press - they range from killer whales to logs of wood and from walruses to masses of peat - seems to me to satisfy the descriptions given by scores of witnesses whose integrity and credibility are beyond question. And to my mind not the least noteworthy fact connected with it is that, so far as I know, not one of those "explanations" or "identifications" comes from a person who has been sufficiently fortunate to have had an opportunity of personal observation of the creature in question.

Thus runs one of the first classic long neck sightings of the modern Nessie era. The creature was sighted at not less than 0.4 of a mile away as it progressed at a leisurely 2.5 miles per hour to its point of submergence. The map below gives a rough idea of Mr. Russell's location up in the hills and the arrow shows my guess as to the creature's south westerly swim past the observer. The yellow line shows the sun's position at about 10:10am according to Russell's own testimony gleaned from elsewhere which agrees with his statement that the sun was behind and to the right of the creature. The others sources for this story are Rupert T. Gould's "The Loch Ness Monster and Others" which was published within a short time of this letter and Whyte's 1957 "More than a Legend".

The sketch at the top of the article is taken from Whyte's book and purports to be taken from the diaries of Fort Augustus Abbey's Cyril Dieckhoff. Being a monk at the Abbey and near to the school where Russell worked, Dieckhoff was handily placed to get a first hand account. It may well be an accurate copy from his diary, although I suspect it may be redrawn. The second sketch below is from Gould's book in which he says that Russell preferred this as the most accurate of the selection of sketches extant at that time. There is also an earlier report from the Scotsman newspaper dated 15th November 1933 which I have not seen. Both sketches come out with a five foot neck protruding from the surface. 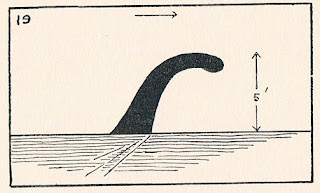 I accept this as a genuine sighting of the Loch Ness Monster but clearly others are not going to take that position. One would suspect that a misidentified bird would be a leading contender, but two points in the letter suggest this is a naive interpretation. Firstly, Russell states that some seagulls were swooping down and circling around the beast. This obviously provided a size reference for the monster and if we assume it is the common herring gull, it will have a wingspan of up to about 60 inches, almost equal to the length of the monster's neck. The second and more important size reference was Russell's comparison of his sighting with a man standing in a skiff. I don't think this distant man was nearby the passing monster, so I am assuming that this boat was observed near the monster's path but later on when he returned to the spot with his telescope.

The observation of gulls around the monster is an interesting and perhaps unique event. Sea birds are known to fly around large sea animals such as whales and dolphins in the hope of getting some fish left over from the hunting of the ceteceans. One might be forgiven for thinking the gulls had got it wrong here in expecting to get a bonus from the Loch Ness Monster, but the point is they are behaving in the same manner as they would for other large aquatic animals. In this case, their expectation regarding this giant is doomed not to follow the pattern of others. Be that as it may, the seagulls' reaction is consistent with the presence of a large creature.

The full length of the neck extending to six feet suggests we have at least an eighteen footer here, average in Loch Ness Monster terms, but a beautiful creature nonetheless. Eighty five years on, the B.A. Russell report stands out as one of those classic long neck and head accounts that typifies the classic view of the monster as a plesiosaur-like creature.