On the Track of Unknown Animals 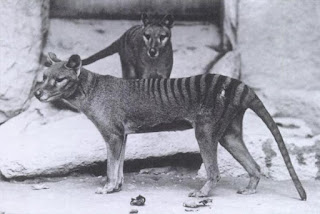 I recently attended a lecture by cryptozoologist, Richard Freeman, on the matter of unknown or unexpected animals and his attempts to prove their existence. It was a great talk and covered various beasts such as the Orang Pendek, Thylacine, Almasty, Olgoi-Khorkhoi and others. What came across was his enthusiasm for the quest as he has undertaken various expeditions across the world under the aegis of the CFZ. That includes such far flung places as Sumatra, Tasmania and the Gobi Desert.

His stories about intolerable heat, parasites, dysentery and various other afflictions in the face of research made me think my excursions to Loch Ness were no more than a walk round the block in field research terms. So I take my hat off to him and wish him well in his endeavours as he continues in the tradition of Heuvelmans and Sanderson "on the track of unknown animals".

What also struck me was his disdain for zoologists whom he described in somewhat flowery language and the prejudice in which they hold people such as himself. Richard has a degree in zoology and continues in the tradition of the zoological explorers who tracked down the Mountain Gorilla, Okapi and Komodo Dragon. It seems the negative bias of such so-called learned people does not stop with the Loch Ness Monster.

Which is somewhat surprising as the search for the possibility of surviving hominids in the form of the Orang Pendek or even the less sensational survival of the well documented Thylacine is a degree of magnitude below so called relict plesiosaurs. The problem seems to lie partly in what he calls "armchair sceptics" who never once went into a jungle or across a desert. Sitting in their labs or standing in their lecture halls, they have assumed the world is largely explored and the likelihood of large animals being discovered is next to nothing.

Richard thinks he is "that close" to getting scientific evidence for his two favoured animals, the Orang Pendek and Thylacine. What he does not need is a group of "experts" carping from the sidelines and offering nothing in the way of encouragement. But one question did come to mind as I considered what he had said.

If, for example, the presence of the Thylacine is finally proven by live capture or carcass, what does that say about eyewitness evidence? The thylacine became extinct in 1936 when the last captive one died. Since then there have up to 4,000 claimed sightings of the creature along with inconclusive films and photographs.

However, like sightings and pictures of the Loch Ness Monster, the pronouncement from science is that the Thylacine does not exist. At this point, there is no carcass, live specimen or close up photographs to allow zoologists to move in that direction. However, if a Thylacine is eventually found, what does that say about zoology's assessment of the anecdotal evidence?

It means that a percentage of the eyewitnesses were indeed correct in what they claimed to have seen. It means that the misidentification-hoax theory used to explain these things away is flawed because it was a theory that always produced a negative conclusion as regards species existence.

For now, the misidentification-hoax theory stands relatively unscathed because no cryptid claims have been validated and so advocates of the theory can continue to claim it is the best theory. However, the arrival of a dead or living Thylacine will blow this theory out of the water and will have ripple effects for sceptical treatments of other cryptid phenomena, including the Loch Ness Monster. I will bet that proof of a thylacine will come before those for surviving hominids or aquatic monsters. When it does, critics of cryptozoology will be in for a rough examination.