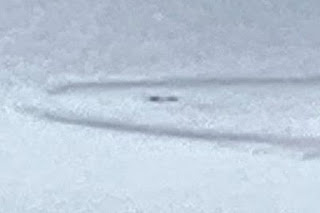 A few days back came the latest video published by the Daily Mail of a wake filmed by an anonymous couple from above Urquhart Castle at about 6am on the 25th April. Below is the relevant text from that article:

The woman had woken up just after 6am on Monday and decided to take some photographs as the loch was so still that its surface was like glass. But after spotting something large moving in the water, she began filming on her iPhone and could be heard saying ‘What on Earth is that?’ as her husband joined her to watch what was unfolding. The couple filmed for two minutes and 37 seconds from 6.21am as the mysterious creature – they estimated it to be between 20 and 30 feet in length – swam beneath the water and gave them tantalising glimpses as it broke the surface.

It appeared to have at least one fin or limb, which paddled under the water ‘like an oar’. The woman also took several still pictures from the vantage point of their holiday cottage set on the hillside opposite Urquhart Castle, around a quarter of a mile from the loch. She added: ‘I really don’t know what it was in the water. It was something large. I don’t think it really equates on the video quite how large it was. ‘We don’t know what the creature was. It was propelling itself with something. It wasn’t how a fish would do it.

The shot below with the castle in the foreground gives some context. Now when I read the headline that it was a double hump film and the best footage for twenty years, I thought I have to see this. But as they say, the trailer is often better than the film and I was disappointed with what I saw. In fact, I struggled to see much detail in the mobile camera clip. We are told they were high on a hillside about a quarter of a mile away from the loch. 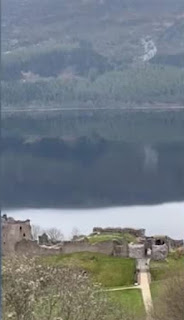 And therein lies the problem, they were in a comparable position to the controversial webcam clips that have regaled newspapers in recent years. Though admittedly, the resolution of this is a bit better. I believe this is a 640x360 resolution (at 25 frames per second) and it looks like the webcam is 480x360 and so the couple's video has about 33% more information. This is not much compared to the webcam, though I suspect the original iPhone video would be higher, perhaps 720p. If so, an investigation is incomplete without seeing this original file.

Now the image at the top of the article is taken from the Daily Record presumably was a highly zoomed in frame from the video. I say that because we also learn that some photographs were taken by the lady and I suspect they may provide more detail than the video. At this point, I do not have access to these and again the investigation may be incomplete without them. However, if this is an enlargement of a photograph, then perhaps they are not that useful.

But what we see in the top image is interesting in that the two dots are behind the bow of the wave which is being generated by something else. In fact, there appears to be nothing at the head of the wave. Clearly there has to be something there and the conclusion is that whatever it may be is lost in the pixellation.

We have the video and there are photos, but we must not discount the naked eye testimony as others are wont to do. The eyewitness said what they saw with the eye was superior to what was recorded and that I can agree with. The human delivers something which no camera can. In that context, some details come out:

Nevertheless, they were still a quarter of a mile away or about 400 metres. This is not a great distance - unless a thirty foot creature wholly breaks the surface with a double hump and long neck display and goes on a swim for a good few minutes. But certainly, going by the video alone, nobody could conclusively identify what is in the sequence - unless somebody comes forward and confesses they had a vessel or something in that area at that time. However, the lack of detail in the video should not be taken as a reason to discount the naked eye testimony.