A Close Encounter with Nessie? 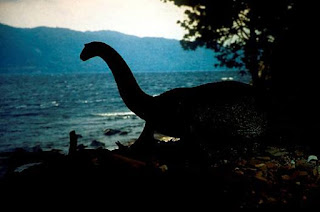 I received a message from another Nessie fan, Paolo Boccuccia, about a story he heard back in 1983. This was Paolo's second visit to the loch in four years and he wanted to ask various local people who were older whether they had seen the monster. One lady, who Paolo thinks was a Mrs. McKenzie claimed to have had a land sighting back in the summer of 1922 near Borlum Bay. Paolo from here refers to the notes he made at the time rather than remembering the conversation thirty seven years later.

She stumbled upon this creature which was no more than six feet long and had the general appearance of a salamander but not quite the same. It was very dark in colour and she noticed it had two extended "nostrils" on a head which she described as like that of a snail. Paolo said this reminded him of the famous Greta Finlay sighting of 1952, though the neck did not seem quite as long.
Having watched the creature for a good five minutes, she drew nearer to it and the inertness of the creature made her think it was either dead or asleep. Since she was now so near to it she reached out and touched its tail. She told Paolo it was like touching a snail. Like a flash the animal fled back into the water and she saw two distinct front paddle-like limbs. There is no mention of rear limbs, though that is not an indication that they were not present. She was startled but waited to see if the animal would resurface. She said her hand was slimy.
That is the story and Paolo met Mrs. McKenzie (or Mackenzie) in Drumnadrochit when she would have been about 80 years old. One presumes she was a young woman or teenager back in 1922. She never saw the beast again and, not surprisingly, she was not believed when she told others. One would presume the lady has long passed away and so we have Paolo's account and no more, though I presume she must have told others when the Loch Ness Monster phenomenon took off 11 years after her encounter.
Of course, we have no corroboration of the event and it is really down to the reader to make their own judgement. I have no note of this eyewitness account in my records, though we do have two land sightings at Borlum Bay. One is the famous Margaret Munro account of June 1934 and there is a more terse account of a girl who saw another creature hauled up on the beach in the late 1920s, but that does not sound like this one.
This looks like a third one from that area, though it is placed near the bay which makes me think it happened at the strip of land between the River Tarff and Borlum Bay. I say that because the river bank is tight enough to allow a creature of six feet long and a person could reach out from the undergrowth between the river bank and a path.
Being six feet long, some may be inclined to conclude it was only a seal that she encountered. However, seals do not have snail like heads with protuberances. Neither are they slimy to the touch nor very dark in colour. Which brings me to the uniqueness of this report. She says she touched the Loch Ness Monster. No other account going back over a century or more makes this claim and one presumes the size of the creature allowed this boldness as opposed to a situation where it was in excess of thirty feet long.
A covering of mucus of some description could only be deduced by the sense of touch. If this is a genuine account, what does this indicate? The late Ted Holiday would have seized upon this report as proof of his invertebrate theory of the monster. The fact that he does not mention this report suggests Mrs McKenzie did not report it to the LNIB in the 1960s.
All manner of animals excrete mucus and nearly all fish do which explains their slipperiness. Amphibians also do this as do slugs but it is not so prevalent with reptiles and mammals. It is exuded to help movement, prevent skin drying out, as a defense mechanism and a protection against pathogens. One speculates it is likelier to be the latter for a large creature.
Ted Holiday had something to say about this mucus property in his book, "The Great Orm of Loch Ness" which championed the giant mollusk theory. He thought he could make out wart vesicles on the skin of the creature photographed by Hugh Gray in 1933. From this and other stories he concluded these vesicles exuded an irritable slime to deter attackers. You may ask why a creature that can grow to fifty foot long would need such protection?
I don't think so and it is debatable what surface features can be resolved on the Hugh Gray creature. My view is that any slime/mucus is more to protect against parasites and so on. Note also our witness, Mrs McKenzie did not state that she suffered any skin complaints after receiving this substance on her skin.
So is this the only instance of an eyewitness becoming a touch-witness? That is something you will have to decide for yourself.
The author can be contacted at lochnesskelpie@gmail.com
Posted by Glasgow Boy at 10:59 55 comments: