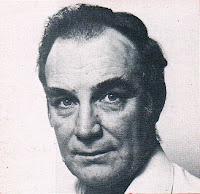 The controversial photograph of the Loch Ness Monster taken by Peter O'Connor (pictured above) has been the subject of a number of articles on this blog and yet again, the picture comes to the fore for another round of debate. The catalyst for this one was a recent, but not unexpected comment by a long-time critic of this picture. He was recently on Facebook echoing a remark quoted in a previous work which tried to convince readers that O'Connor stuffed his canoe skin:

It should not come as a surprise that in later years he wrote a 'standard work' on taxidermy.

The implication being that taxidermy skills were used in crafting O'Connor's so called fake monster. It should come as no further surprise that anything that smacks of modelling or crafting may be used as "evidence" against Peter O'Connor. In my case, instead of sniping from the proverbial armchair, I decided to buy the taxidermy books he wrote and peruse them for anything that would suggest foul play. His first work was written in 1975 entitled "Fish Taxidermy" whose cover is shown below. 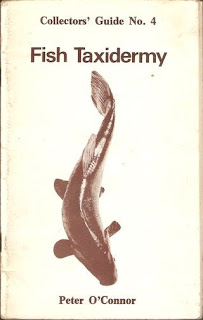 The second more comprehensive work was published in 1983 by the name of "Advanced Taxidermy" which is further shown below. This book handily had a good picture of Peter O'Connor which was shown at the top of this article and also has the following short biopic on Peter from a taxidermy point of view. 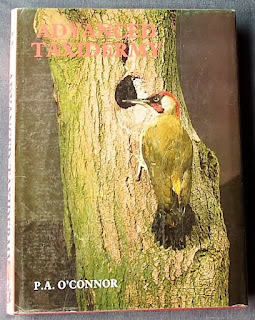 THE AUTHOR Peter Andrew O'Connor was born in London in 1933. He was introduced to taxidermy as a boy scout at Jarrow-upon-Tyne, later becoming a commercial taxidermist at Luton, Bedfordshire, in 1964, and then expanding into European taxidermy. In 1970 he moved into research taxidermy on the freeze drying techniques created by Reg Harris. He was the first successful taxidermist to do so, and developed these freeze drying techniques to a commercial level. Eventually he developed a new field to taxidermy called Combined Taxidermy.

He has been the Chairman of the Taxidermists Federation of Great Britain and Ireland, since its inception in 1973. His work appears in over seventy museums in the British Isles alone, besides appearing as far afield as Japan, Australia and the West Coast of the USA, and covers all forms of taxidermy work. Mr. O'Connor is a teacher and lecturer of taxidermy, and has written many papers on the subject, including a book called Fish Taxidermy. He has been a keen naturalist since boyhood, and is a European Wildlife Conservationist.


Coincidentally, O'Connor was born in the year that the modern Nessie story was also born and it is clear that his taxidermy interest started at a young age, though it seems his first jobs were in the Army and Fire Service. But back in 1960, this sceptic is implying taxidermy skills played a part in his alleged hoax; so let us parse that one a bit further. This is what the aforementioned critic stated in his opinion on the O'Connor picture:

A short time after the photograph was taken Dr. Maurice Burton visited the site and reported polythene bags, string and stones which could have been pressed into service as filling, buoyancy and ballast material.


A look at O'Connor's book suggests that his preferred packing material for taxidermy were items such as tow, plumber's hemp, modelling clay, silver sand, cotton wool and even rubber carpet underlay. This is on top of the wiring and cork used in the internal support. It came as no surprise to even a novice like me that rocks and stones were not mentioned as part of the packing methodology on Peter O'Connor's taxidermy. The obvious reasons are collapse of the specimen due to weight and ease of transportation.

But this means nothing to those intent on blackening O'Connor's name. In fact, stuffing rocks into a canoe as opposed to performing delicate taxidermy is a bit like saying sledgehammering and needlework are similar skills. Going back to the quote above, it is a bit disingenuous to say the materials found by Burton could be pressed into stuffing service.

The truth is Burton found little in the way of polythene ("charred fragments") or string. Mentioning stones is an irrelevancy as the entire beach is covered in stones for miles! So Burton found stones on the beach? That is quite a revelation, but overall and as explained in a previous article, it is quite improbable that the taut rubberised canvas of the presumed canoe could stretch to the dimensions of the O'Connor object's geometry. Indeed, the proposed one-man canoe was unlikely to be the one used by O'Connor as a letter (below) to Tim Dinsdale two months later suggests a two-man canoe, thus rendering the entire analysis invalid. 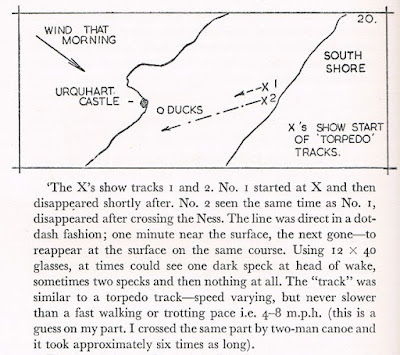 This letter recounts a low grade wake sighting about six weeks later when O'Connor went back to the loch (a natural thing to do if you had seen the creature weeks before). Remember, when O'Connor took his photograph, he had his friend Fred Fulcher with him, hence the need for a two man canoe to get to this inaccessible beach. Forget about any analysis about stuffed canoes, rudder points and markings, it is all irrelevant to what was actually employed in 1960.

But leaving the final say to Maurice Burton, one wonders why he didn't use O'Connor's taxidermy skills as a stick to beat him with? After all, he personally knew the man having offered his advice to O'Connor on monster matters, was closest to the investigation but was afterwards quite scathing of him. Despite all this, he stuck to his air inflated monster bag theory into the 1980s. You may suggest he didn't know about these taxidermy skills and I would reply that once Peter O'Connor published from 1975, Burton had a good chance of being aware of this especially since he was a renowned zoologist with connections to museums with taxidermy displays. So, in conclusion, it is best to say "get stuffed" to the taxidermy insinuations!