In our previous two studies on this famous photograph, the issue of Richard Frere's conflicting testimonies was examined and finally labelled as "inadmissible as evidence". As a postscript to this episode, I added this further point to the previous post:

Leaving the Richard Frere testimony behind us now, I would like to now look at the second of the three arguments raised which concerns the alleged internal evidence of the picture itself. So take a look at the picture again. 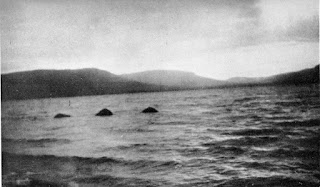 Now move your eyes to the top right corner and observe the light, fuzzy patch in the sky. It is claimed that this is the sun shining up Glen Urquhart and since we are looking westwards, it must be in the evening. However, Lachlan Stuart claimed he took his picture around 6:30 in the morning when the sun would have been eastwards. This would imply Stuart was a liar and hence suggest the photo is faked. This theory about the sun being in the west was certainly mentioned in Steuart Campbell's 1996 edition of his book "The Loch Ness Monster: The Evidence" but undoubtedly this view was doing the rounds before then.

Actually, there are several fuzzy patches scattered across this picture and debunkers may be referring to the other patch of lightness below it. I don't know, but whatever one is picked, it is irrelevant to the rest of this analysis. Now take a look at the next photograph below which I took this year at roughly the same spot as Lachlan Stuart (no one actually knows exactly where Stuart was standing).

So we have more fuzzy patches and an area of brightness in the top right in the direction of Urquhart Bay. So my question to you is where is the sun in this picture? Is it in the top right of my photograph? 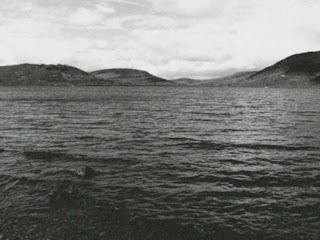 The answer is it is not and it is nowhere. The picture above is the colour photo below passed through black-white, blurring and defocusing filters to bring it closer to the lower quality of the Stuart picture. The picture was taken at about 12:20 in the afternoon on the 9th April 2012. At that time the sun would have been out of view to the left of the picture. The solar position calculator below shows a yellow line denoting the direction of the sun on that date and time. 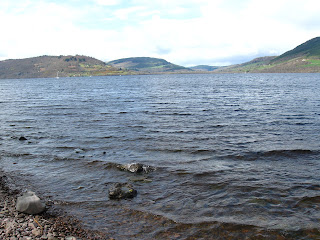 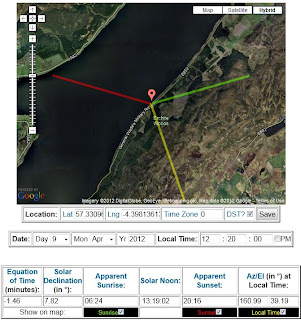 I would also have to say that I did not even take this picture with this fuzzy sun argument in mind. I just happened to be there and took the picture. If I had been more organised I could have got an even more relevant picture. But let me now make some further observations about this westerly-sun interpretation.

First of all, using a cue from the Stuart picture we can work out the elevation of the alleged sun in the top right.  The leftmost hilltops in the picture lie in the area of the hill Creag Na h-lolaire which has a height of 245 metres. We also know the distance from Lachlan Stuart's position to the summit which is about 4400 metres. Using these, the angle the mountain subtends from the shore to summit in the picture can be calculated. Using the diagram below this comes out at 3.0 degrees. Note that Loch Ness is 17m above sea level and I presume the summit is measured in metres above sea level, so I subtracted 17m from the 245m figure (this decreases the value by 0.1 of a degree).

As a confirmation of this angle (and to demonstrate such investigations can be carried out at the loch or from one's desk anywhere in the world), I was back at Loch Ness this Tuesday past doing some research for the final part of this series. I also brought along with me a sextant to measure the aforementioned angle. It wasn't the greatest sextant in the world but it was accurate enough and gave me a similar answer of about 4 degrees. 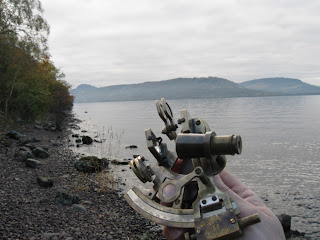 With that angle, we can now estimate the apparent elevation or angle of the "sun" in the sky and that comes out at about 8.25 degrees (about 8.35 degrees if we add the sea level horizon back in). We can also estimate the azimuth of this "sun" because it is positioned above a known geographical location - Urquhart Bay.

One further obstacle to be removed is the location of the true horizon as this determines the true elevation of the sun. Where the loch meets the land may be a good estimate of the horizon but the true horizon is actually about 15 kilometres away based on a camera height of 1.5m and a loch elevation above sea level of 17m. The most distant mountain in the picture gives us some guidance. Using Google's 3D rendition of the Lachlan Stuart photograph (below), we can zoom into the distant peak and I think it is Creag Mhor lying between the towns of Milton and Balnain and its summit is about 10km from the Lachlan Stuart site. 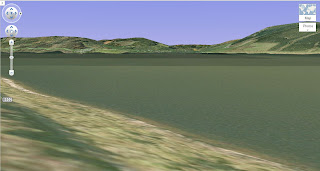 As you can see, its base barely differs from our working horizon and so we will assume 15km will not make much of a difference either.

The question now before us is simple. If the photograph was a fake taken on an evening just before the 14th of July 1951 - not in the morning but when the sun was falling above Urquhart Bay, where was the sun actually positioned?

A rerun of the solar calculator (below) creates a problem for the "evening sun" theory. If we set the date  to the previous evening and find out where the sun was at the estimated azimuth down Urquhart Bay, we find two things. Firstly, the time of day was 7:30pm but the elevation of the sun in the sky for that azimuth was 17.43 degrees! In other words, more than twice that of the alleged "sun" here and the real sun would be too high in the sky to appear in the photograph. 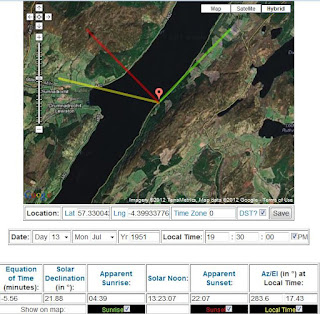 Another issue is regarding shadows. If the sun is indeed shining from the west at an elevation of 8.25 degrees, a further piece of trigonometry (diagram below) says that the objects in the picture should be casting a shadow whose length is about 7 times the height of the object (as we know, shadows lengthen in the evenings).

In this picture, I see precious little evidence of any shadow. Now due to the foreshortening effect of perspective, the actual length of the shadow visible depends on the relative position of the observer and the object-shadow. If the observer is directly above the object, they will see the whole length of shadow. If they are at eye level with the object, the shadow is not visible. How much shadow should be visible to the observer in this situation? Note that Lachlan Stuart was not at eye level with the loch else we would see little water. In fact, using the apparent angle our hill subtends, the entire loch visible up to Urquhart Castle is at least 10 degrees. As a rough calculation, that would mean 1/9 of the shadow is visible or 7/9 (78%) of the height of the object should at least be cast as a shadow in this picture.

If anyone is wondering about the shadows cast by the waves in the Stuart photo, just ask yourself how they also manage to cast similar shadows on my noon day picture.

However, if Lachlan Stuart was where he claimed to be at about 6:30am on the 14th of July, then the sun would be behind him and any shadow cast by the objects would be on the side of them not visible to Stuart or his camera (see solar position diagram below). 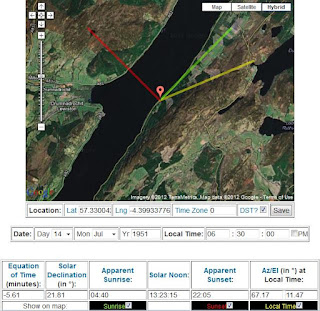 So, in conclusion, there are three issues associated with this evening sun theory.

Now, debunkers may come back with their counter-arguments but at issue here is a problem which may not be limited to the Loch Ness Monster in the realm of cryptozoology. That problem is a so-called critical thinking which undergoes inadequate peer review. By that I mean, someone puts out a theory which suggests a photograph (or sighting report) is a hoax or misinterpretation. Once out in the public domain, it gets picked up and propagated without any serious attempt to test whether the theory has any logical or evidential basis in fact.

In other words, there is a element of "preaching to the choir" in the whole process.

I will address the third of the three arguments against the photograph in hopefully the final post on the subject.

Part Four of this series can be viewed here.