People may not wholeheartedly believe in a large creature in Loch Ness, but the image of a prehistoric beast continues to pervade cultural imagery. Two items came up recently to demonstrate this. The first is the poster for the next Highlands Comic Convention in March 2012 showing Tank Girl, Judge Dredd, Dennis the Menace and Gnasher riding on a less than willing Nessie. (Note to US readers, Britain has its own version of Dennis the Menace). Full story at BBC website.

It is a source of confusion to me why Nessie is so often portrayed in green in cultural references when she is actually uniformly reported as various shades of grey. The artist has also dispensed with the long neck approach here. 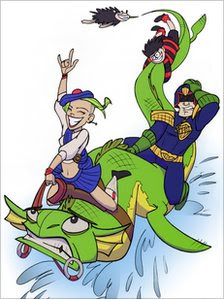 The second is from the series of TV adverts created by the makers of "Scotland's other National Drink" - Irn-Bru. This drink is sometimes recommended as a hangover cure after imbibing Scotland's main national drink (i.e. whisky). The advert linked to YouTube below is a rerun based on the successful cartoon from the 1980s. Look out for Nessie swimming below around 30 seconds in!

Since the advert wishes everyone season's greetings, I will now take the same opportunity to wish readers a Happy Christmas and I will post again once the effects of the turkey, pudding and alcohol has finally dissipated!
Posted by Glasgow Boy at 01:00 No comments:

Alex Harvey and his The Sensational Alex Harvey Band had a string of hits in the 1970s but one album he produced in 1977 took an entirely different tack altogether. Entitled Alex Harvey Presents The Loch Ness Monster, his interest in Nessie is evident to see in this collection of eyewitness accounts.

Where this item acquires high status in Loch Ness Research is in its recordings of the actual witnesses recounting their experiences. Clearly there is an advantage to be gained here from listening to the actual people who claimed to see what they saw as opposed to reading it on a more dispassionate page. The following witnesses were interviewed:
Father Gregory Brusey
Frank Armstrong
A. Hewson
Sam Job
Alex Campbell
Mrs. Margaret Grant of Invermoriston
Frank Searle
Sandy Smart
Sgt. Nicholson
Mrs. Kathrine Robertson
Ian Dunn
Billy Kennedy

Some accounts such as Frank Searle will no doubt be viewed with disdain. Alex Campbell's account of something he earlier said was cormorants is controversial. The rest are people largely removed from the Loch Ness investigation scene and were just ordinary people going about their lives before being stopped by something regarded as extraordinary.
The album is available to listen to on YouTube in three parts via these embedded links: