The Bank of Nessie

What does it say about a nation that chooses the Loch Ness Monster as their second choice of subject for Scottish banknotes if independence was achieved?

A recent survey of 2000 Scots saw the national poet, Robert Burns, get a quarter of the vote and Nessie getting a tenth. So much for John Logie Baird, David Livingstone, Alexander Graham Bell and James Watt. Original story here.

On the other hand, Nessie is a natural treasure and if she ever was conclusively proven, even Robert Burns would be overtaken in the popularity stakes.

Nessie has appeared on money before. The best example is a one dollar coin minted by the Cook Islands government in 2009. 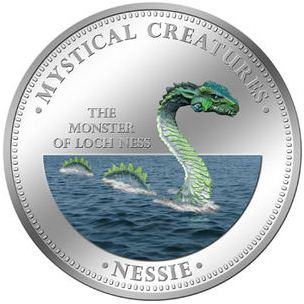 Quite an interesting depiction which does not quite bear a true resemblance to what people see. I like the term "mystical" as opposed to "mythical", neither of which applies to the Loch Ness Monster apart form the older Kelpie stories. I have not found another legal tender coin depicting Scotland's second choice of banknote subject but some stamps do carry images. Some say that stamps are legal tender and can be used as a form of payment. Though I doubt they are legal tender, they can be accepted as a form of payment. This 1992 stamp from the Maldives Islands shows Nessie in her more plesiosaurian mode. 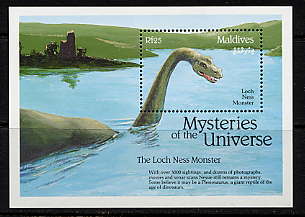 This 1991 example from the United Kingdom is actually aimed at dinosaurs but Nessie gets on to the actual first day cover. So no actual Nessie on the stamps themselves. If you know of any others, let me know. 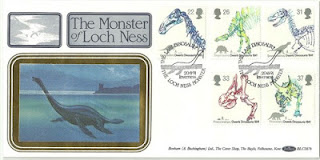 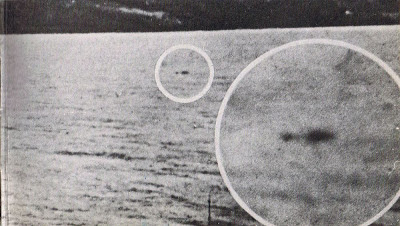 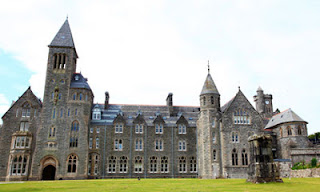 This blog is not only interested in the Loch Ness Monster but the general history and folklore of the people and places around the loch. Unfortunately, that can also involve the darker side of human nature. I hope that whatever happens here, the truth will be found out and the necessary actions taken.

What is in this postcard? 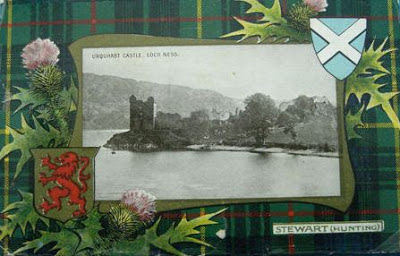 Here's an interesting postcard from 1916 which I noticed on eBay a while back. It was posted 17 years before the Nessie era began in 1933. The familiar backdrop of Urquhart Castle is there but what is that blob like thing in the water in front of the castle?

Is it our famous resident of Loch Ness on a jaunt or something more familiar? The castle is about 50 feet high which allows us to calculate the height of the object as about two feet out of the water and six feet wide.

Is it a rowing boat? Perhaps, but any presumed occupant of the boat is rather hard to see as are the expected oars.