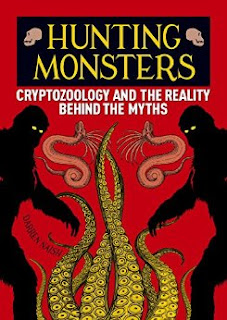 It appears that the latter end of this year will have more than its fair share of book reviews as several books on the Loch Ness Monster make their way to the publishers. In that light, I thought I would get one review out of the way that has lain in the form of written notes for some months now.

I refer to Darren Naish's "Hunting Monsters: Cryptozoology and the Reality Behind the Myths" which was published in Kindle format back in January this year. As you can guess from the title, the mode is very much debunking the "myth" and presenting the sceptical view of "reality".

Darren's ebook comes after a similar publication from 2012 entitled "Abominable Science!" by Daniel Loxton and Donald Prothero. That book was praised to the skies by the sceptics but when a closer look was taken by those who did not have a vested interest in the book, things began to fall apart. My review of that book can be found here.

Is this book any better? I would say it is, though the presented "reality" against the "myth" of the Loch Ness Monster is again far from conclusive. Compared to "Abominable Science!", there is more attempts to be original in the thinking behind sceptical interpretations of Nessie cases. However, it has to be said, that a lot of that thinking seemed to originate from sources other than Darren.

The book begins with an assertion that the diversity of creatures described points more to human imagination than actual animals awaiting discovery. The book seems to present us with an either/or choice here, but it is not as simple as that. My alternative opinion is that differences in monsters described is down to various factors.

Firstly, witnesses do not always get the details right. Even though they may have seen something large and alive, the finer the detail described, the greater the room for error. This is especially so at greater distances and other conditions which disturb a clear view. Also, it is clear that some of the 1800 or so accounts will be tall tales. If you have someone fabricating their account, then they could describe almost anything that muddies the waters and corrupts the database.

Roy Mackal, in his book, "The Monsters of Loch Ness", took the position that 90% of all sightings were fake or misinterpretation. I do not personally think the percentage is that high, but if it was that close, it is no surprise that non-monster accounts contribute to an unclear picture.

Again, the King Kong film is raised as an influence. I covered this in my review of "Abominable Science!". Suffice to say it is not a convincing theory. Some mistakes began to surface as I read through the book. For example, in "showing how things were afoot at the loch at the time" before the famous Spicer report, Darren mentions the 1932 Fordyce land sighting. However, that story was not made public until 1990 and had nothing to do with the mood "at the time".

The aforementioned Spicer story is examined and I wish to point out an example of exaggerated narrative from Darren. Of this sighting he says:

Over the years, the description became increasingly sensational. It started out as 2– 2.5 m in length but gradually increased to 9m.

Unfortunately, this is the kind of subliminal language that implants the wrong kind of impression into the mind of the reader. Darren appears to be trying to demonstrate that monster stories grow with the telling. However, he is completely wrong. The first account from the 4th August 1933 does indeed state the size of the creature as being 6 to 8 feet. However, the "gradual" part is not true.

The truth rather lies in Rupert T. Gould's book, "The Loch Ness Monster and Others", published about 10 months after the Spicer event. Gould quotes a letter to him from George Spicer which states:

After having ascertained the width of the road, and giving the matter mature thought in every way, I afterwards came to the conclusion that the creature I saw must have been at least 25 feet in length.

It's as simple as that. George Spicer re-evaluated based on the width of the "ruler" the monster had been seen crossing over - the road. Why Darren Naish omitted this detail is not clear. After all, he quotes Gould in regard to this case. In the context of such inaccuracies, I noticed one withering reviewer of this book on Amazon declare this:

"Anyone who actually believes in the Loch Ness monster ... should read this - it would help them to grow up."

Now I don't know if this reviewer could even find Loch Ness on a map, but one gets the impression that such reviewers have a picture of "believers" running to their caves in fear of such cutting sceptical books exposing their so-called psychological deficiencies. The truth is that a lot of these reviewers know little about Loch Ness and its Monster and assume these like-minded authors speak with unerring accuracy on Loch Ness matters. They don't. Period.

Well, I looked at the Gray and O'Connor theories and put a bullet through them here and here. Advocates of a large, exotic species in Loch Ness need have no fear of such theorising by sceptics. In fact, I enjoy dismantling their weak theories and this book was no exception.

Now I mentioned that Darren was not the actual source of these swan and canoe theories. That honour goes to long time Nessie sceptic, Dick Raynor. How much of Darren's treatise on the Loch Ness Monster is actually his own or others such as Dick Raynor is hard to ascertain, but these easily challenged theories were known to me well before Darren's book.

Another place where Naish relies on Raynor is the aforementioned Fordyce land sighting. We are told that, in fact, what Mr. Fordyce saw that day was a donkey carrying a dead deer bagged by some hunting party. Here is a picture of a horse carrying a bagged stag compared to the animal that Lt. Cmd. Fordyce claimed to have seen. 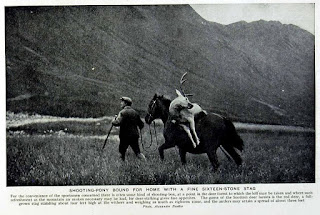 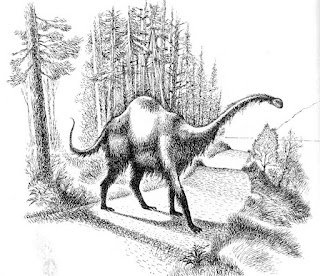 Yes, I can see what they are driving at here ... not. Some of the interpretations of the sceptic baffle me. I admit the Fordyce creature is strange - even by Loch Ness Monster standards. But, even allowing for memory lapses on the part of Fordyce, nobody should accept such a weak explanation. Better to say nothing and take a neutral position.

I could go on with the problems with this Nessie section of Darren's book. His handling of the folklore of the Loch Ness Water Horse is unsatisfactory. You can read my introduction to this theme here. His dismissal of pre-1933 accounts is, of course, vital to the framework of the sceptical theory since it relies on Nessie being a creation of the Great Depression years.

Moreover, his description of Richard Franck's 17th century "floating island" at Loch Ness, as a man-made raft runs completely counter to what even Franck theorised about this strange object from 1658.

A thought did cross my mind as to whether Dick was grooming Darren as his successor. After all, Dick is now moving into his late sixties, as is Adrian Shine. Despite our best intentions, old age will eventually put a stop to any argument or debate one may wish to engage in and the question of succession seems to be a serious question for Loch Ness sceptics.

As I survey the online and published domains, I see no clear and worthy successors. Perhaps Darren is seen as "The One", but in my view, once Dick and Adrian get out their slippers and pipe, Loch Ness scepticism will go down the plug hole.