200 Years of the Inverness Courier and the Loch Ness Monster

As I was driving to work this morning, BBC Radio Scotland ran a short feature on the 200th anniversary of the Highland newspaper, the Inverness Courier. Not surprisingly, one particular storyline was uppermost and that was their local monster. Nessie.

As a bonus, they ran a short interview with the Courier's Fort Augustus correspondent, Alex Campbell from 1958. He was retelling the story of how he submitted the first story of the monster back in May 1933. However, the association of the Courier with the Loch Ness Monster goes a long way back.

The first mention I find in the Inverness Courier of strange creatures in Loch Ness comes from the 16th October 1833 where the obituary of a well known soothsayer, Willox the Warlock from Tomintoul is covered. Willox (or Gregor MacGregor) was famed for advising clients on magical solutions to their problems via the use of a supernaturally endowed bridle which he alleged a brave ancestor claimed from the Loch Ness Kelpie with a blow of his sword. 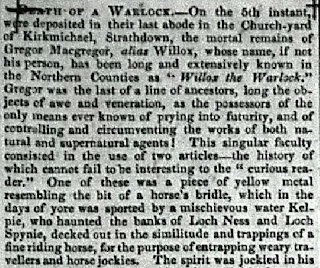 The Courier refers again to the dreaded monsters of Loch Ness in the first case of a Loch Ness Monster misidentification from 1st July 1852 when two ponies swimming across the loch raised some superstitious consternation amongst the locals. 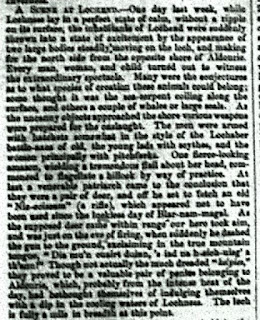 A more relevant reference from the 8th October 1868 talks of the first monster hoax when fishermen dumped a dolphin carcass in the loch. Talk of the "huge fish" that was seen to surface occasionally in the loch were prompted by this discovery. I talk more of this curious incident here. 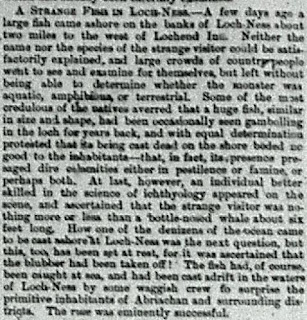 Even up to the start of the Nessie era (1933-present), strange stories would still surface, such as this letter published on the 29th August 1930 which recounts the curious experience of several anglers (later identified by Rupert Gould as Ian Milne and others). 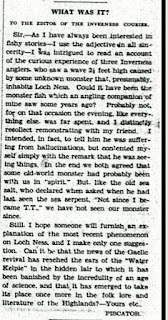 However, the story that started it all was published on the 2nd May 1933 when Aldie Mackay's encounter with a two humped creature was written up. Alex Campbell was later panned by some sceptics for the way he wrote this. As it turned out, it was not him but their histrionics that was a strange spectacle (see here). 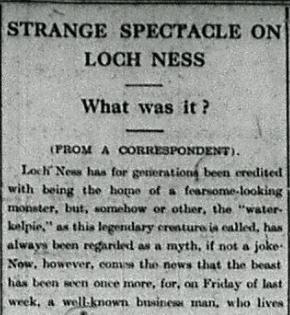 And so the Courier moved in lockstep with the monster as its varied appearances made their way into the newspaper for decades to come. As an example, from 13th August 1971 is the unique account of how diver Robert Badger had a close encounter with a creature underwater as he went for a swim.

And so the list goes on and today the monster stories have gone online for millions across the world to engage in the latest stories from the loch. Many have been the hours when I have poured over the pages of the Inverness Courier looking for new information that advances the cause of the Loch Ness Monster; be it in paper, microfilm or online digital form. So, I for one am grateful for their contribution to the mystery and hope for many years more of them reporting on their most famous inhabitant.