BBC Cambridge broadcast their program "Inside Out East" and did a feature on Simon Dinsdale and his belief in the Loch Ness Monster (pictured below on the left). We know about his father's famous footage and I was interested in what he had to say about this and Nessie in general. 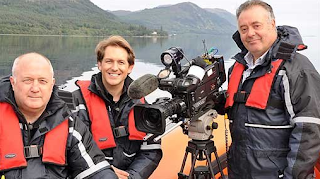 First he had no doubt that his father had seen the monster. Any talk about fakes or boat misidentification do not wash with him. If his father had reconsidered and decided it was a boat, his son did not know anything about it and in my opinion would not in good conscience have appeared on the program. So it looks like Tim believed he saw the monster to his dying day.

Simon also mentioned two sightings he had. One was of a black object sitting on the loch which he and his family saw but not his dad, who I presume was driving!

The second sighting I already knew about from later editions of Tim Dinsdale's "Loch Ness Monster" book. In 1970, they were in choppy waters near Urquhart Castle and then a long pole like object appeared out of the water which sped past them before submerging again.

The interviewer suggested a tree (perhaps in one of those strange skeptical scenarios being propelled to the surface by gases!) but Simon said nothing was found on a search. It's always good to hear eyewitness testimony especially being held with conviction years later.

The account itself is recounted in Tim Dinsdale's book "Monster Hunt" aka "The Leviathans". Here it is:

"On August 30th, while out drifting at the mouth of Urquhart Bay late one afternoon, I spotted a tall, fat 'telegraph pole' sticking up from the water, perhaps half a mile distant. I shouted 'look at that' to my eldest son and Murray Stuart, another experienced monsterhunter, who were standing in the cockpit, as I dived into the cabin for my binoculars. It was choppy at the time, and equipment was safely cushioned on the seats. I heard both comment excitedly ... 'My God, look at it go.'

In a matter of seconds the object had streaked across the water, disappearing behind a promontory near Urquhart Castle. It was such a brief experience - and there had been no time to focus cameras - but it had been entirely real. Starting the motor, we plunged through the choppy water but found no evidence of anything on the surface. Discussing the sighting, we concluded it must have been the head and neck of one of the larger animals. It must have stood ten feet at least out of the water. My son's eyesight is exceptional, and Murray sketched the object he had seen which he declared thickened near the water, curving slightly at an angle when moving fast.

My own view was momentary; and since I did not see the movement or the curvature, I believed the neck was moving away from us when first sighted, Then it must have turned to the right just I went into the cabin."

Now don't tell me ... they all were fooled by a bird that took fright and skittered quickly across the water. Ten years watching the loch obviously counts for nothing!


The programme can be viewed until I think the 21st December on the BBC iPlayer at this link.
Posted by Glasgow Boy at 04:20 3 comments:

I shot this video at Foyers Pier in July and talked about how I "monster hunted". A basic discourse, nothing about setting up underwater camera and sonar. Just the basics!

And, no, Nessie did not break surface as I filmed unfortunately. The first video of this series can be found here.