A Review of "The Loch Ness Sea Lion" 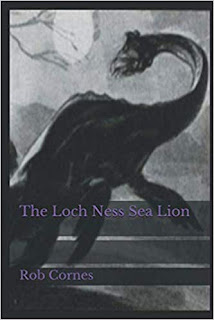 Author Rob Cornes is better known for co-authoring the cryptozoological work, "The Seal Serpent" which investigates the possibility of a currently unclassified long necked pinniped being responsible for some sightings of aquatic cryptids. In that book he also mentions the possibility of some known pinnipedia playing their part in this mystery and that has been developed in this smaller book devoted to the Loch Ness Monster and seals with a diversion to other Scottish water monsters.

Two families of pinnipeds are discussed, the first being the phocid family which are classed as earless seals and includes the harbor seal which lives near Loch Ness, The other is the otariid family which are the various species of sea lions and are characterised as having pointed ears and being more slimline. However, sea lions are not indigenous to the North Atlantic.

Now, Rob is a sceptic insomuch that he gives no credence to the idea of an indigenous air breathing cryptid in Loch Ness, but neither does he go down the road of ascribing all monster sightings to known phenomena at the loch. In other words, he thinks that some sightings, especially in the 1930s, were down to an outside visitor to the loch he believes to be a sea lion. 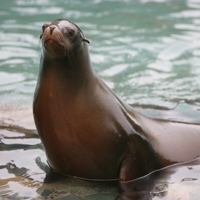 
But, as just stated, these animals are not known in the waters around Great Britain. Rob suggests this objection can be resolved by the history of captive sea lions from zoos, circuses and private collections escaping into the seas of the United Kingdom. That such escapes have occurred he proves from newspaper articles dating before the 1930s and beyond. Many were recaptured but it is reasonable to assume some forged out into the seas and survived. Rob reckons at least a dozen made their way into European waters.

So, we are taken through some of the well known land sightings of the Loch Ness Monster from the late nineteenth century onwards and some features are noted as sea lion like such as the waddling motions described by some witnesses or a caterpillar like or lurching motion. The MacGruer incident of 1919 is speculatively correlated with the Mackintosh Bell sea serpent sighting of that period and a recently escaped sea lion. Could these three incidents be one and the same creature?

Meantime, Rob speculates further that the Alfred Cruikshank event of 1923 was more likely a resident phocid of the old bull male variety due to the apparent absence of a long neck. What was more irreconcilable to seals was the Fordyce sighting of April 1932 which looked more like a grey camel with next to no head. But I do feel Rob overindulges in speculation by linking the event to a large rail delivery of livestock to a show in Inverness and therefore the escape of some kind of non-local cattle.

As he gets into the busy Nessie period of 1933-34, Rob makes some statements that can be challenged. He attributes the seminal Aldie Mackay report as no more than a "mild disturbance in the water" which is not the case if one reads Gould's interview of the witness. Moreover, a sighting by three anglers in 1930 is dismissed as an embellishment while a follow up letter describing a "very large seal" is accepted because it has the relevant keyword "seal" in it. Should one set of witnesses be discriminated against another on this basis?

Rob toes the sceptics' canonical line that a combination of events such as King Kong, untrained eyewitnesses, sensationalistic journalism all contributed to a fabricated monster. So, for example, the Spicers are dismissed as seeing only an otter. Interestingly, he also mentions the old tales of water horses as being part of the kindling that ignited the phenomenon. Most others look to contemporary influences as the only factors.

As suggested above, sightings which report seal like features are given greater credence such as those by Janet Fraser and Mrs MacLennan which are shown below from contemporary sketches. In these cases, the protuberances on the Fraser creature are suggested as like the ears of the sea lion and the tail on the MacLennan creature is seen as possible rear flippers of said creature. 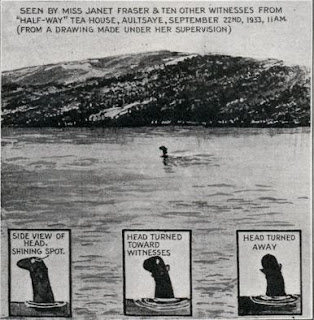 And herein lies the conundrum of the sceptical position. On the one hand, sightings of large creatures are dismissed as inaccurate due to inexperienced eyewitnesses and wishful thinking. However, Janet Fraser is presented as an eyewitness who could have discerned seal ears from half a mile and MacLennan gave a credible description of rear flippers. The problem is obvious - if they are credited with getting those smaller details right, then why not the rest of the description?

Indeed, if one or more seals did venture onto the shores of Loch Ness over the years, why is there not one report from anyone saying they saw seals on land? Is the "expectant attention" effect so pervasive that no one was ever capable of simply reporting a bona fide seal? I think not, and perhaps it is safer to conclude seals were never seen on land by anyone (though that does not preclude seals beaching on the loch with no eyewitnesses).

But the story that gets the most attention is the famous account by Arthur Grant in January 1934. Rob is correct in taking the view that Grant did encounter an aquatic animal. Investigators of the time plumped for a tuskless walrus which is the only surviving member of the other pinnipeds, the odobenidae family. Rob plumps for the otariid sea lion and notes (among various points) the bounding action described by Grant is reminiscent of that seal.

I concede that is true but the main issue is that what Grant describes does not look like a sea lion and again we visit the issue of eyewitness reliability. Rob gets around this by suggesting Grant knew what he saw but embellished his account with a cryptic clue when he said the creature looked like a plesiosaur-seal hybrid. This is somewhat contradicted when Rob further suggests the webbed feet described may have been misperceived hind flippers. In my view, unintended misperceptions and intended embellishments do not usually co-exist.

But the nub of the argument for me is size. Sea lions are relatively small compared to the beasts described at Loch Ness and, as said before, some eyewitnesses to terrestrial sightings had one outstanding frame of reference - the road. Or, if you like, the creatures were moving over a giant ruler.

So the challenge before any investigator is deciding what is inaccurate and what is not. Unfortunately, that is susceptible to selection bias, If you are prone to a given theory, then features described by eyewitnesses which favour your theory can be deemed to be accurate. Those which are not tend to be ignored or dismissed. It is a condition that afflicts all of us.

Did a sea lion once make its way into Loch Ness and confound the people around the loch decades ago? Rob cannot prove it, but neither can I prove what Arthur Grant perceived, misperceived or embellished, so it is really down to the eye of the beholder and their own degree of intellect and emotion.

What I would ask is whether he considers his other theory of a possible large and long necked pinniped being the alternative explanation for monsters seen at Loch Ness? Rob has given a book with some novel thinking and some interesting tales of creatures known and unknown from newspaper reports of old. It also helps to add to the store of knowledge on the seal as Nessie theory. So, I am happy to include it in my library of books and recommend it to others.