The Daily Record is running a video taken at 1:30pm on the 10th March by tourists at Urquhart Castle which appears to show a hump in the act of submerging and leaving a circular water disturbance behind it. The pictures were taken alongside the video which you can view at the link above.

However, the witnesses state that "We were so mesmerised, we didn't immediately think of taking pictures although we had the cameras in our hands". It seems that good old "shock and awe" kicked in, but they did get the aftermath of whatever the large object was. Was it our favourite cryptid briefly surfacing or something else? Reasonable comments are welcomed.

The main question is what is the dark object in the centre which is apparently causing the water disturbance?

POSTSCRIPT: I note one Loch Ness researcher has this to say:

".. video of bubbles close to Urquhart Castle jetty at the time and date that divers were recording Google Earth underwater footage - pretty hard to miss the support boats"

The first problem with this opinion is that the video does not show bubbles. It shows a circular disturbance of water. I think this opinion is reading too much into the video. The dome like object in the photograph looks an unlikely candidate for a bubble and, of course, is not in the plural ("bubbles") as suggested. As for the Google Earth team and support boats, that must be some diver to produce a bubble that size! 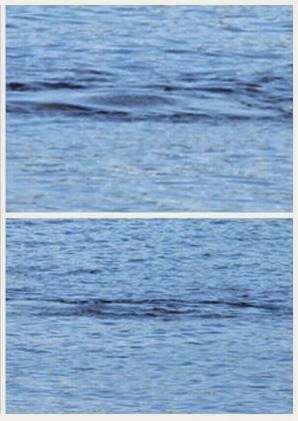 THOUSANDS of tourists flock to Loch Ness every year hoping to see the elusive monster - or even better - get a photograph of it.

So when a black hump emerged from the dark waters of Britain's biggest loch, as Connie Ross and her daughter Reyshell Avellanoza were taking pictures, the opportunity was too good to miss.
But the pair were so mesmerised for those vital few seconds, their chance of capturing a rare close-up image of the Nessie phenomenon, was gone.

Instead, they filmed the aftermath as the mysterious object sank to just below the surface and moved away into the loch, leaving behind a perfect circle of disturbed water.

It was 29 year old Reyshell's first visit to Scotland, having flown over from the Philipines with her five year old daughter, Heather Elizabeth, to visit her stepfather, 73 year old retired architect Campbell Ross and her mother and Campbell's wife, Consuela (50).

No trip to the Highlands would be complete without a tour of Urquhart Castle and the chance to see the loch's shy occupant.

Connie said: "Campbell drove us down to the loch last Tuesday. He stayed in the car park, and my daughter and granddaughter walked down to go round the Castle and then take pictures by the loch-side.

"It was about 1.30pm in the afternoon and I had my still camera. Reyshell had her tablet and we were taking pictures when Heather pointed out something in the water.

"She said it looked like a big black belly. We looked and could see this big disturbance quite a way out and this big black object in the middle of it.

"We were so mesmerised, we didn't immediately think of taking pictures although we had the cameras in our hands.

"By the time we realised what we were seeing and began filming and snapping away, the object had sank virtually out of sight and moved away further into the loch, leaving behind a perfect circle of water - like a whirlpool.

"I took still photographs and Reyshell used her zoom as well to try and get a closer look, but it wasn't as good as what we saw with our eyes.

"One of my pictures shows a dark object behind the circle of water and that was it moving away.
"We were all quite excited by it. I have always been a believer in the monster and for my family to see it was amazing. If we had been a little quicker with our cameras, we would have better images."

Former Inshore Lifeboat chairman Campbell, who lives in Oldtown Place, Inverness added: "I had been countless times to the loch and didn't bother walking down with them.

"I wish I had not stayed in the car park now. I am also a believer that a strange creature inhabits the loch, but what it is, I haven't a clue.

"However I saw something similar about 30 years ago, a few miles away at the Lochend part. I was driving back to town and a bus-full of tourists had stopped in the lay-by looking at something.

"There was so much excitement and having seen the video and photographs, it certainly is very unusual and caused by some animate object.

"But until someone gets better visual proof, the mystery will live on." 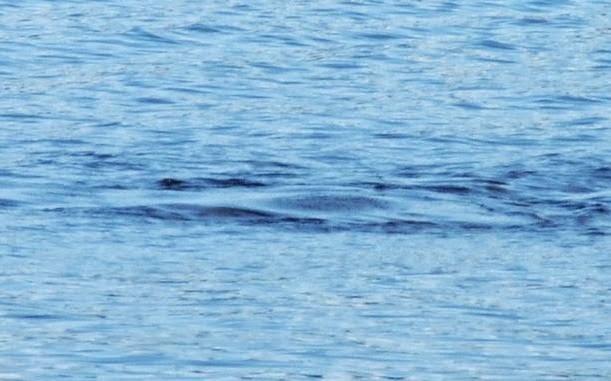