For some years now, webcams have been trained on various locations at Loch Ness enabling people from all over the world to indulge in some monster hunting.

Adam Bird, a regular reader of this blog, sent me something he snapped last year as he was scanning the loch surface on the webcam run by Mikko Takala. which was trained on Urquhart Bay looking north. The incident happened on September 18th 2010 at about 12:20pm and in Adam's own words:

I happened upon the Nessie Cam by accident and had been watching it for about 20 minutes when I saw the object you see on the photograph. I quickly took a snapshot and copy and pasted it. It is hard to make out much detail, I do admit. I am not saying that there is anything 'monstrous' about the thing in the water but about an hour later a boat came and passed by and I took a shot of that too to compare it to the shape in the water.


The picture is shown below accompanied by the boat image (you can click on the images for a bigger view). 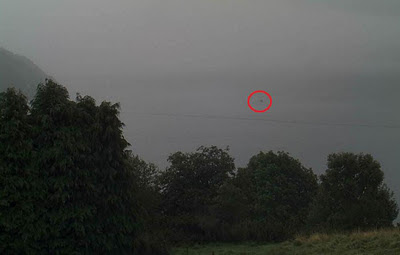 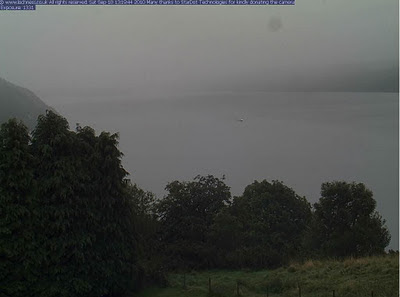 Here is Adam's zoom in of the object.

Grabbing the image of the boat an hour later is an important help as it gives an indication of how large the object is. Typical cruiser boats on Loch Ness are about 30 feet long, 12 feet wide and 8 feet high. My estimate is that the object is smaller but not significantly. As you can see, the webcam is trained on an area quite far out which though enhancing the chances of seeing something is countered by the large distance to the object which must be at least 1000 metres.

Comparing the two pictures, we note that it was a misty day and was a bit mistier at object time rather than boat time. There is also a ripple line going across the centre of the picture which I presume is the right arm of a wake from a boat that passed previously. There is however, no indication that the two are connected in any way.

The zoom in reveals something almost dome shaped in appearance and a grey area behind it that is suggestive of water disturbance, but I may be over-speculating.

The other interesting point made by Adam is that though the webcam refreshes every few seconds, the object was there and then it was not there. So where did it go? If it was a rowing boat or dinghy then it would surely have been in view for a long time given the wide vista of the image (for a dinghy type analysis go here). As Adam said to me:

The webcam only displays still images that updated every few seconds, so it went from being nothing in the water, then as it refreshed the object was there. On the next image the thing was gone. So I cannot say how it appeared and disappeared.

So, though the object is too far away for a conclusive identification, the mystery is how it literally popped in and out of the webcam?

Finally, Adam, had an even better webcam experience some years before:


I did see an object on a similar webcam about thirteen years ago, in Urquhart Bay, and I can say for sure that it was something out of the ordinary. It was the classic upturned boat shape and my estimate compared to nearby boats would put the length at around 15 to 20 foot long.

It was dark in colour and moved around the water in a horseshoe shape. I tried to get a still of it but unfortunately could not get one. It is something I have regretted ever since. I am 100% sure that it was some sort of odd object which could not be explained by any rational explanation such as a seal, deer, elk, otter, wave nor log. Unfortunately I have no proof of this sighting except my word.

Webcams overlooking Loch Ness seem to have come and gone over the years. There has even been an underwater one. If anyone knows of any others then post a comment below this article or send me an email (lochnesskelpie@gmail.com). The point being that what is available should be valued and put to use.

Whilst watching whatever webcam, if something appears then employ the snapshot facility to capture as many images as possible. If the object disappears then take some more snapshots as their timestamp will prove the object did not simply drift out of view like a normal boat.

If there is another webcam trained on the same area, see if the object is there too and then snapshot from that (in the past this was certainly possible around Urquhart Bay). Obviously, it helps to have both webcam sites already running ready to go.

Finally, like Adam, wait for one of the regular white cruiser boats to pass near the spot to provide a size and shape comparison. It is better to do this nearer to the time of the object's appearance. It can be done on a different day so long as it is near the same time and weather conditions are similar.

Who knows, with persistence, perhaps you will capture the elusive head, neck and humps of the Loch Ness Monster itself.

UPDATE: Dick Raynor has some webcams running on Urquhart Bay, so perfect for a bit of triangulation! Go to this link.

Loren Coleman has published his top cryptozoological books for 2011 and yours truly has managed to get his book on the list. Nice to have some recognition. You can find out more about the book here.
Posted by Glasgow Boy at 03:32 1 comment: