An interview and a painting

Gareth Williams was briefly interviewed last Friday on BBC Radio 4 regarding his latest book, "A Monstrous Commotion". If you go to the podcast, jump about five minutes before the end to find it. It is available for another few weeks.

Meanwhile, I bought this nice painting of Loch Ness and its monster on eBay. I like it. 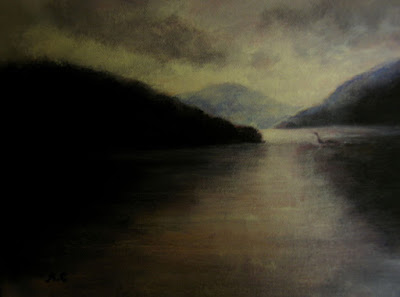 Another Forthcoming Book On Nessie!

The discussion on the latest Nessie book by Gareth Williams is not yet over and we're now talking about yet another book. This time it is authored by Nick Redfern who is a well known investigator of paranormal mysteries. This time, in his simply titled book "Nessie", he explores "the supernatural origins of the Loch Ness Monster". The book is due out next year, which by my estimation means there are a potential four books on Nessie out in 2016 (Nick Redfern, Malcolm Robinson, Karl Shuker and Paul Harrison). 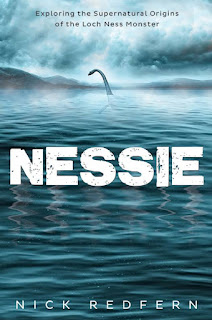 Whilst on this very subject, I am flagging up an event in which I shall be speaking on "A Paranormal History of Nessie". The event is the Scottish UFO and Paranormal Conference, 25th June 2016 in Glasgow. You can find more details here.

I acquired some pages from an old copy of the International Journal of Cryptozoology (Vol.7 1988) which had some Loch Ness Monster articles. Three books were reviewed by Robert Rines, well known past President of the Academy of Applied Science; Richard Fitter, co-founder of the Loch Ness Phenomena Investigation Bureau and Jack Gibson of the Scottish Natural History Library.

They respectively reviewed Henry Bauer's "The Enigma of Loch Ness", Steuart Campbell's "The Loch Ness Monster: The Evidence" and Edward Armstrong's "Sticking My Neck Out!". The first two will probably be known to most readers, the last one was privately published and I looked at it myself some years back at this link. The pages are shown below and you click on them to get a larger, readable image. 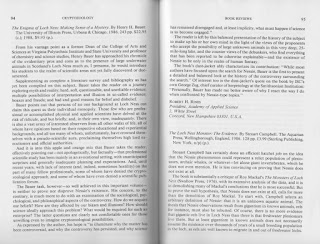 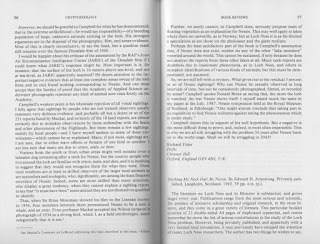 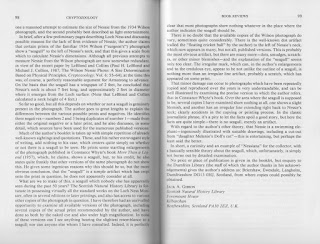