A personal "hunt" for Mokele-mbembe

One of this blog's long term readers, Erik Kristopher Myers, has been on a Mokele-mbembe quest for some time. However, it's not an expedition into the Congo, but something he saw as a kid on TV:

When I was a wee lad in the early 1980s, there was an American program called "That's Incredible!" that dealt with people, places, things and other assorted Nouns that were...well, incredible. This was just after I'd made the natural transition from a childhood Dinosaur Fixation to a Nessie Fixation due to the idea that maybe there were still living, breathing dinosaurs out there...! Such possibilities truly capture a young mind.

At any rate, my parents, having seen commercial previews, made sure to sit me down this one evening for the latest episode of "That's Incredible!", as it was due to show what they mistakenly believed to be new Nessie footage. Turns out that while Nessie was name-dropped in the previews, the footage was actually of a purported Mokele-mbembe.

Said footage blew my mind in a way that no photo or motion picture before or since ever has (aside from the good ol' Surgeon's Photo). What was shown that night was captured by an investigator (whether African or African-American now escapes me), and clearly shows a head and neck rising from a mist-enshrouded swamp. My memory is colored by time, but what I recall seeing was unlike anything ever captured at Loch Ness, and was essentially the Sandra Mansi photo of Champ brought to life.

At any rate, this has stayed burned into my mind for thirty years now. With the advent of the internet, I began digging for info, and the dig is ongoing. The bottom line is that the footage has gone the "Thunderbird photo" route and dropped off the face of the earth. The crypto books don't mention it; and it seems to be commonly confused with the "swimming elephant" Mokele-mbembe video taken above Lake Tele in the early 90s. However, there's a growing number of folks online who are also coming forward to say that they too remember this particularly striking video. Attempts on my part and the part of others to contact the show's producers or locate copies through independent channels has been fruitless.

This Mokele-mbembe mystery has become the stuff of legend, with so many crypto-heads "discovering" lake monsters via this film's one and only TV screening, presumably at a young (and very impressionable!) age. Seeing this still is disappointing in the extreme, and just underlines how unreliable the memory can be. A lesson to be remembered, I think?"

Erik's search has been partly fulfilled in the finding of an old article quoting Roy Mackal which sheds light on this old but forgotten video footage. The relevant words are shown below plus a still from that film which is now shown to be a fake. Note Dr. Mackal's other words concerning his belief that Nessie is an extinct whale called the zeuglodont. 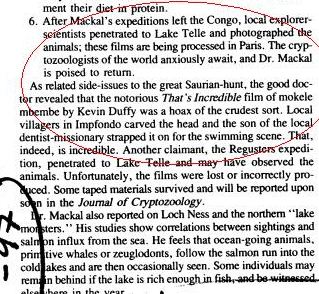 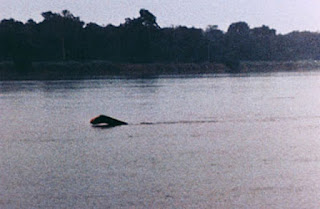 If anyone can add the last piece to the jigsaw by providing a link or otherwise to the actual video then I am sure Erik would be grateful. Meantime, the hunt for the real Mokele-mbembe continues.

As a footnote, Erik is a film producer who is working on a script for a Loch Ness story which focuses on the monster hunters of the 1960s and 1970s. It's in its very early stages, as there is one film and another screenplay ahead of it. But if it ever gets to final release I know I will be in the queue to buy a copy!

By coincidence, Tabitca Cope has done a piece on Mokele-mbembe too, here. We can also expect a new book on the beast by Paul Harrison this year or next.