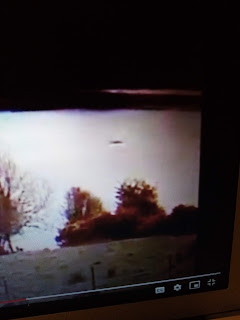 As far as I know, there has been no lochside reports of the monster yet, and we can largely put that down to the current covid-19 lockdown as tourists (generally) stay away from the loch and locals are restricted in their movements outside of their houses. With all that in mind, it could turn out to be a low year for sightings, perhaps the most in a long time.

So, as more and more people go online to fulfill their needs and wants, the Loch Ness webcam comes more to the fore more than ever before. So, as things stand, we have three reported sightings, all of them on webcam, all of them on one webcam and all from our friend, Eoin O' Faodhagain. The video can be viewed here from its YouTube link and has received over 200,000 as I type:

The video was recorded at 0826 on Wednesday the 22nd April. The Sun newspaper ran the story from which I quote:

A NESSIE enthusiast claims he has spotted the Loch Ness Monster for the third time this year.

Eoin O'Faodhagain says his recording is the biggest ever "confirmed" sighting of the mythical beast. The 55-year-old veteran Nessie watcher believes he saw the legendary creature swimming and splashing about in Urquhart Bay last Wednesday. He describes spotting a 30ft long shape in the water before quickly hitting record on his camera. In the video, a long black shape can be seen floating atop the water.

The mysterious object remains suspended in the water for a few moments, before slowly submerging over the course of two minutes. As the clip ends, the shape disappears without a trace under the tranquil waters of Loch Ness. Mr O'Faodhagain, from Drumdoit, Co Donegal, immediately recognised the creature and submitted his findings to the Official Loch Ness Monster Sightings Register.

The organisation have since "confirmed" the footage, which is thought to be the largest ever seen. The 55-year-old said the mythical beast emerged from the water and stayed motionless. But then “after a few seconds splashing motions can be seen on the video.”

Mr O'Faodhagain explained: ”Then it submerged slowly into the loch disappearing from sight."

“This sighting is also special because there was no boat traffic or wave disturbance in the video and the surface of the loch was calm.”

He believes the pictured Nessie was at least 30 feet long and rose at least 4 to 5 feet high.

He said: “It was amazing to see such a large image caught on video compared to my previous sightings.”

Mr O'Faodhagain is no stranger to Nessie, having caught the first sighting of the decade back in January as well as a further sighting earlier this month on 14 April – as well as four times last year.

Eoin reckons it is his best image yet and I would tend to agree with that and he reckons the extent of what we are looking at is about 30 feet and about 4-5 feet out of the water. The main thing is that the object appears to submerge which is important in excluding various candidates. He also told me it came up out the water, there was nothing there when he began watching, though this happened too quickly to record. A further image he took can be seen below. 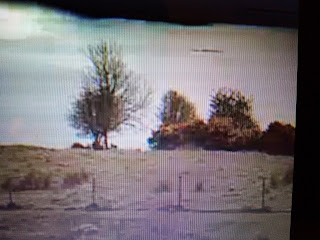 He also said there was evidence of splashing around the object, which is a bit harder to see in the video. In this instance, we can't look to visitors to the castle to corroborate as the site is currently closed. So what could it be and what are others saying? Looking around the chat sites, we have suggestions of a tree trunk, a windrow or the monster. The only reasonable "natural" contender is the windrow which is a reflection of the dark hillside amidst more turbulent water. That phenomenon is explained here.

Having seen pictures of windrows, this image looks sharper but that may be due to the increased contrast. However, the main factor in favour of a reflection is to watch the large shadow above it and note how it decreases in darkness and size in sync with the smaller dark patch. This would be enough to suggest to me that it is a form of reflection fading as the sun shines more.

This is demonstrated in the two snapshots below from the beginning and end of the video clip. Note the large reflection on the surface has more than halved in sized while the smaller monster one has completely vanished. This is because they both have a common cause. 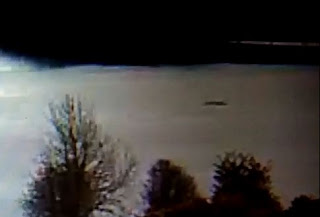 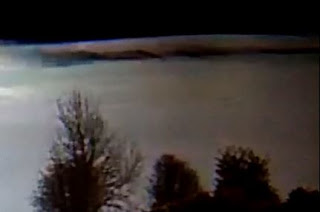 On a related note, I contacted Historic Scotland about installing a webcam at Urquhart Castle. They said they had no plans, despite me suggesting it would be great publicity for them to stream the loch with some part of the castle complex in the foreground (after all, you have to prove it was taken at Loch Ness). I suspect this is more a financial issue to them and will pursue it further. Such an installation would cut the distance by a factor of at least 10, depending how close an object was to the camera and root out the false positives from further webcams.