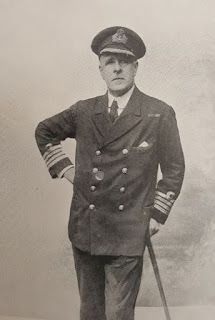 In the ranks of Nessie hunters, you would have heard of Tim Dinsdale, Ted Holiday and Roy Mackal, but perhaps not a man by the name of Munro. He is not a figure that dominates in the annals of Loch Ness Monster hunting, but he had a part to play in the early days of the mystery. In fact, his appearance is rather bright and fleeting, but it could all have been so different.

Captain Donald J. Munro, C.M.G, R.N. (Retired) came to the attention of the national media in June 1938 when he proposed a more rigorous scheme for obtaining conclusive evidence for the Loch Ness Monster. The earliest newspaper e-clipping I have on this is from The Scotsman dated 11th June 1938 and is reproduced below.

Previously, Munro had been one of the first advocates of modern harbour defences and in 1912 implemented boom defences at Portsmouth and later at Scapa Flow, where he was King's Harbour master. Indeed, in his pre-Nessie book, "Convoys, Blockades and Mystery Towers", he elaborates on the testing of mines at Loch Ness: 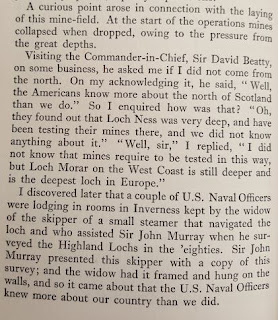 But, to summarise monster matters, Munro saw no profit in such tactics as aeroplanes, airships, boats or submarines as he saw the creature as being sensitive to noise. To him that meant immovable observation posts with "observers and instruments always ready for action" with the early morning being the best time. In support of this, his 45 years on steamships convinced him that fish and aquatic mammals were afraid of vibrations set up by propellers.

The instruments in question would be a camera with a long-range telephoto lens, range finder, cine-camera, stop watch, light meter and powerful binoculars. These would be employed by experienced observers, one being a naval officer and another trained observer and two other volunteers. These people would man the stations from daylight to twilight on two man shifts. One such platform could even be fixed on the surface of the water to get closer to the target.

The London Times took up the story on the 14th June as shown below. Though the Captain had no doubt as to the creature's existence, the source of its food mystified him as he speculated on unknown food stocks. I don't think he had to think too hard about that, but the biggest unknown was getting this project off the ground.

The Northern Chronicle took up the story further on the 15th June (below) stating that Munro had no idea what the identity of the creature could be, being unable to reconcile its observed behaviour with what he knew about from his maritime adventures. To him, it was all about obtaining those conclusive photographs which would be submitted before a panel of experts for assessment.

Of course, the thing is we hear no more of Captain Munro's proposals. We read in Ted Holiday's 1968 "The Great Orm of Loch Ness" on how the young Holiday contacted him and Munro sending him his proposal pamphlet entitled "Loch Ness Mystery" but no further details. Indeed, this pamphlet is one of the rarest of Loch Ness items as I have never seen a copy of it at any time in any place. It is not even in the National Library of Scotland which prides itself in being the main repository of Scottish literature. Perhaps one day ... one wonders where Holiday's copy ended up. 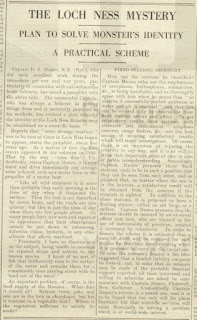 So, the idea never got off the ground. The aforementioned pamphlet actually doubled as a prospectus for the one and only Nessie IPO as shares priced at one shilling each were suggested as a means of financing the entire endeavour. Since the three camera stations proposed were priced at £500 each, that meant an initial offering of 30,000 shares.  The total cost of £1500 would be about £93,000 in today's money and so perhaps we see the problem Munro had in raising the readies.


How far Captain Munro actually got in this fund raising campaign is not known, finding the equivalent of £93,000 obviously was too much, but 1938 was not a great year for funding monster hunting either. By then, we were five years down the monster line and interest was waning, especially in the light of events surrounding Nazi Germany.

And, after all, even the insurance magnate, Edward Mountain had spent far, far less on his expedition back in the more halcyon days of 1934. So, it seems even rich men were averse to throwing too much money at this problem.

However, Munro was somewhat vindicated twenty four years later with the formation of the Loch Ness Phenomena Investigation Bureau which did implement fixed stations with cine cameras fitted with long range telephoto lenses and multiple teams. The results were mixed but never conclusive and one wonders what the Captain would have made of it all and what suggestions he may have offered.

As it turns out, Donald Munro had died ten years previously in 1952 at his home in Crieff, Perthshire, aged 87. It was a pity he never saw the realisation of his ideas at the loch, but we should stand back here and acknowledge the foresight of this man in proposing these techniques those long years before.