The Loch Ness Monster and the Unfortunate Goat 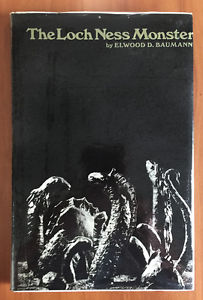 Another Nessie fan had mentioned a land sighting to me which had escaped my attention but I thought should check out. The story comes from a less well known book published in 1972 entitled "The Loch Ness Monster" by Elwood Baumann which runs thusly:

The next expedition was made up of two young Germans. Their plan seemed like a reasonable one. They were going to rent bicycles and pedal round and round the loch. Whenever they saw the monster, they would hop off and photograph it from different angles. They seemed rather startled when someone pointed out to them that a bicycle trip around the loch involved seventy-two miles of pedaling. Nevertheless, they rented two light-weight English bikes and set off on their big adventure. When they returned the following evening, they were flushed with triumph. Their expedition had been unbelievably successful. They had photographed the monster splashing playfully around only a few yards offshore. They had also managed to get pictures of the monster asleep on a sandbank and eating a goat in a pine forest.

An understandably cynical Highlander listened to their story and tried to hide his smile. It was a pity, he told them, that they hadn't been fortunate enough to get a picture of the monster climbing a tree or having lunch in the Drumnadrochit Hotel. Someone else gently suggested that the Germans have their film developed in Inverness. That way, the local residents could have a good look at the monster, he told them. This the two Germans refused to do. The editor of an important magazine in Germany was going to give them a great deal of money for their film, they said, and they were anxious to get home and collect it. Unfortunately, their departure from Inverness was delayed. The police had been informed that two young monster hunters had left the Foyers Hotel without paying for their rooms, drinks, or meals. It also developed that the two men had brought the rented bicycles onto the train with them. The Loch Ness Monster expedition from Germany came to an unhappy end when the heavy door of the Inverness jail slammed shut behind its two members.

If you peruse Amazon, you will see that Mr. Baumann was a busy author in the field of mysteries during the 1970s with books published on Nessie, Bigfoot, Monsters of North America, UFOs, Vampires, the Devil's Triangle and, of course, motorcycles. In other words, he was not a dedicated expert on the monster and most likely was either commissioned to write a series of books or wrote them on his own initiative. On my list of Nessie books, I say this about his book:

This was one of several mysteries books written by Baumann. It is another boilerplate book which basically surveys the sightings history though since Mr. Elwood was a member of the LNPIB there is a bit of extra emphasis on their work. The book suffers the indignity of the Hugh Gray Nessie photograph being printed upside-down and the front cover sculpture of Nessie by Dick Dulany is intriguing to say the least!

The 1970s saw a flood of books mentioning Nessie as monster fever rose to a crescendo with the 1975 Rines pictures before abating into the sceptical 1980s. It is therefore no surprise that any author with an eye for mysteries and a buck were busily deploying their typewriters in this pursuit. But what about the actual story?

The first problem is that Baumann nowhere states the source for this story, or any others for that matter. It is a story to excite rather than research. So, I have no way of investigating it further from a purely journalistic point of view. But it hardly needs to be said that this is a story which has its tongue firmly embedded in its cheek. There may well have been two Germans making sensational claims, but the tenor of the story clearly implies we should not take it seriously at all.

I don't think Baumann made it up, I rather think it is a story that is of the same genre as the German hoax story of 1934 and I think that is where we should leave this one. As for German on bikes in the 1930s, it is now established that a lot of German youth in the early 1930s were coming over to Britain as hikers and bikers in the guise of tourists to spy out the British infrastructure for war purposes. In that light, perhaps this concocted story was a cover for more sinister activities?