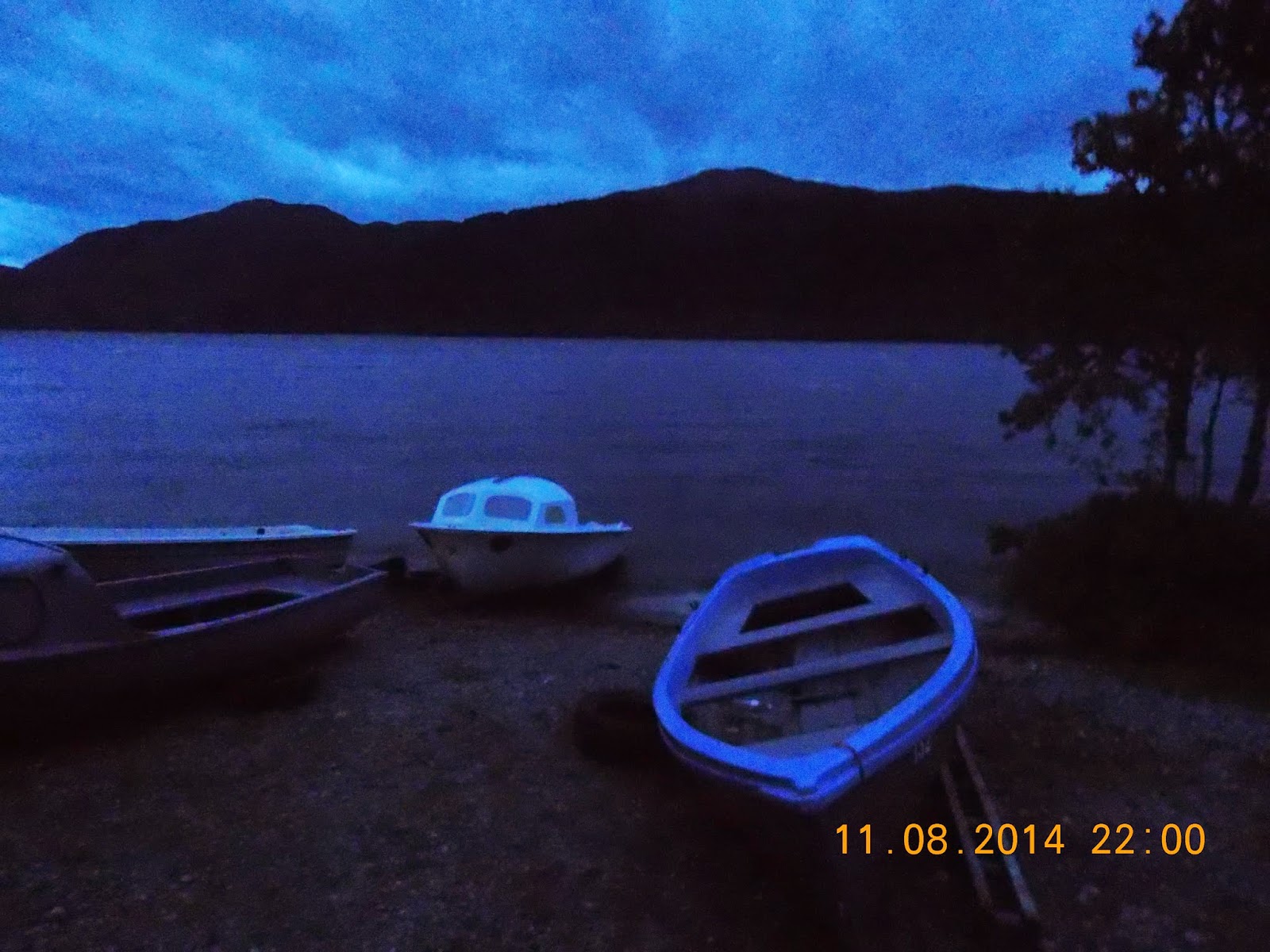 I must admit that this excursion to Loch Ness proved a bit of a wash out. As it turned out, the remnants of Hurricane Bertha was about to greet me as I made my way up the high road. Going by the lashings of rain that came upon us, I was grateful that we rarely experience such storms in their full vigour. So, it was a period of almost continuous rain, but the old tent held up well as we camped over the weekend of the 9th August at Foyers.

Given the weather, some of my activities were curtailed and I also failed to get in touch with some people I intended to talk to. However, some people I did talk to, such as Ala MacGruer who is a long time resident of Foyers and knows the area like the back of his hand. He is a keen fisherman and is old enough to remember Frank Searle. In fact, he featured in the 2005 documentary, "The Man Who Captured Nessie", in which he reminisced as a local on Frank's time there.

Ala was an independent witness to a head neck sighting made by the Hargreaves in 2011. He was sticking with that story and I have no reason to doubt him.  As an experienced and down to earth observer of Loch Ness, he has one of the better tales to tell of strange sights at Loch Ness.

I also chatted with him about other things, such as the memories of his neighbour, Hugh Gray, who took the first photo of the monster. Ala was also the nephew of William MacGruer, whose experience of a strange animal lurching into Loch Ness around the time of World War I has long formed part of the Loch Ness story.

Apart from the usual surface watches for anything unusual breaking the surface, I also tried out some new trap cameras. However, the aim of these was not to capture the monster in the water, but on the land. So, in  a sense, they are pointing in the "wrong" direction. But my reasoning is that the creature is more likely to trigger the camera on land since the motion/heat detection area is much smaller (i.e. the creature is not 300 metres away in the water). Also, you'll get a far more interesting and decisive picture than a hump in the water.

The problems dictating against an installation are manifold. Firstly, car traffic will continuously trigger the camera and wear out the batteries over a multi-month period. The trick here is to set the camera to night mode (between 0000 and 0700) since it is highly unlikely that the monster will venture onto land during daylight hours. I know it did in the past, but the loud presence of fast moving cars is now a deterrent.

Also, the camera has to be in a hidden spot so it is not easily spotted by parked cars or hikers. So I will run those for a few months but the rarity of land sightings dictates against immediate results. One trap camera experiment that did not go as well as I thought was the Covert Code Black Special Ops camera (or the UM565). 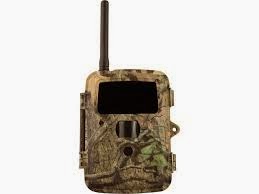 Now this is an expensive camera and offers leading edge new features such as sending MMS pictures over the 2G/3G mobile phone network to your phone or email account. It also has a remote control command set using SMS text messaging so that you can request immediate snapshots or reconfigure your settings.

All in all, a great set of features, but no good for my research. I have to first say that it was a bit of a pain to set up for mobile networking. I bought a rolling monthly SIM contract from Vodafone and eventually got it sending pictures to my gmail account and mobile phone. I set it up and left it for a few months.

So, I was regularly getting pictures from the camera as events such as birds and waves triggered the detection software in the camera. I must admit I felt a sense of satisfaction being able to conduct monster hunting from wherever I was located in Edinburgh. Also, the occasional SMS message would automatically send me a view of the loch at that time.

However, the problem began when the camera began to send multiple images from sun glare. This was not an issue in and of itself but it became clear that the act of sending an image across the network was a bigger drain on battery power than simply saving the image to a file on the SD card. Within six weeks, the camera shut down! This was despite running on twelve AA batteries.

I retrieved the camera and took it back home. On further thought, I realised this was not going to improve in the autumn and winter months as sun glare would be replaced by continual shots of heightened wave activity. So I will sell the camera and replace it with two or three simpler SD card cameras. We live and learn.

Meantime, the other usual experiments continued. Infrared recordings of the loch at night, the car dashcam recordings and beach searches. There is nothing to report there on the monster front (though I am still reviewing the night videos). Even though technology has improved and cheapened immensely, the monster hunter of today has the same problem as the monster hunter of old - a creature that rarely breaks the surface is not beholden to any such technology.

However, Loch Ness continues to bring up other interesting images. Firstly, one wonders how tourists manage to forget things so easily? 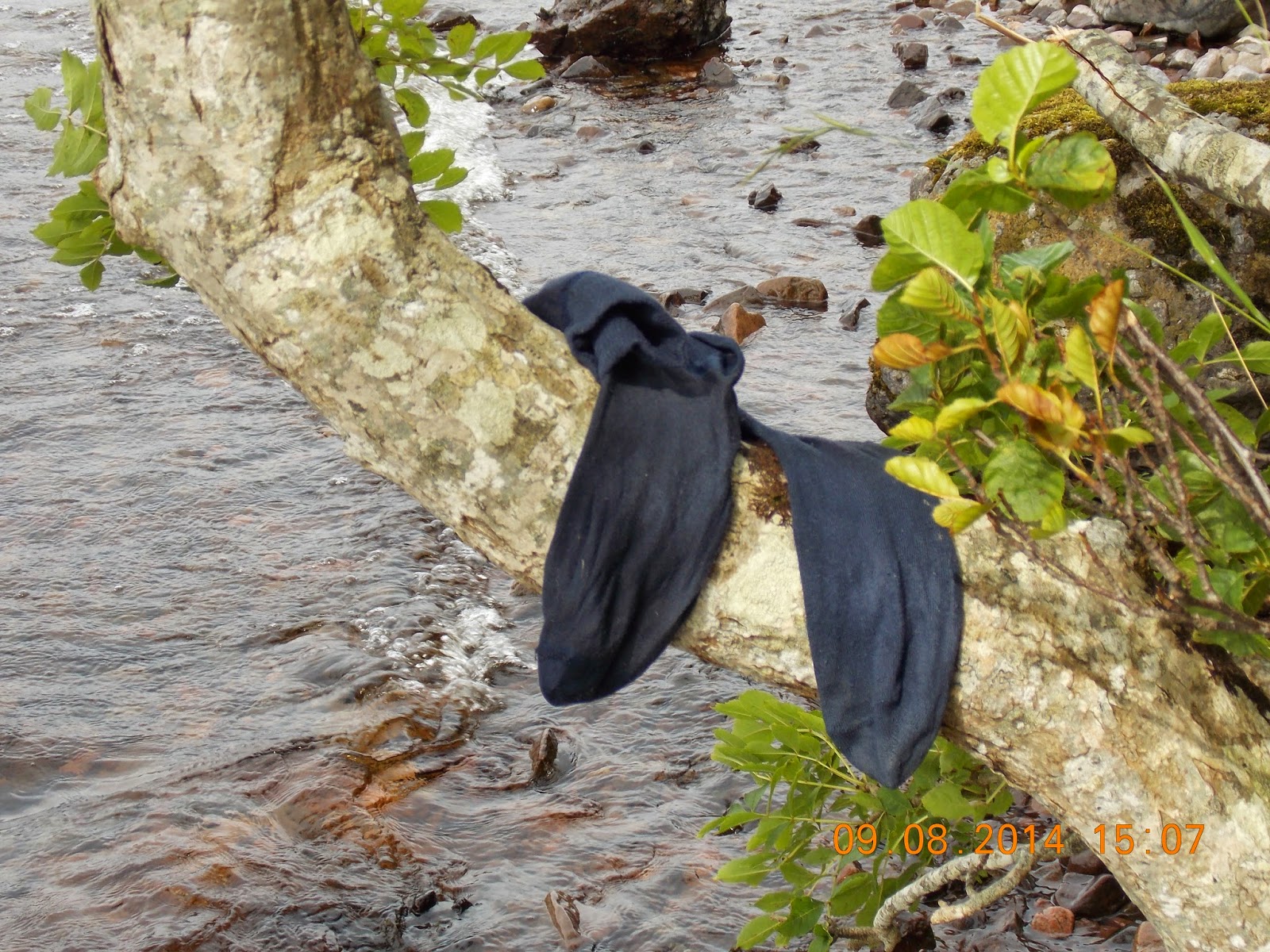 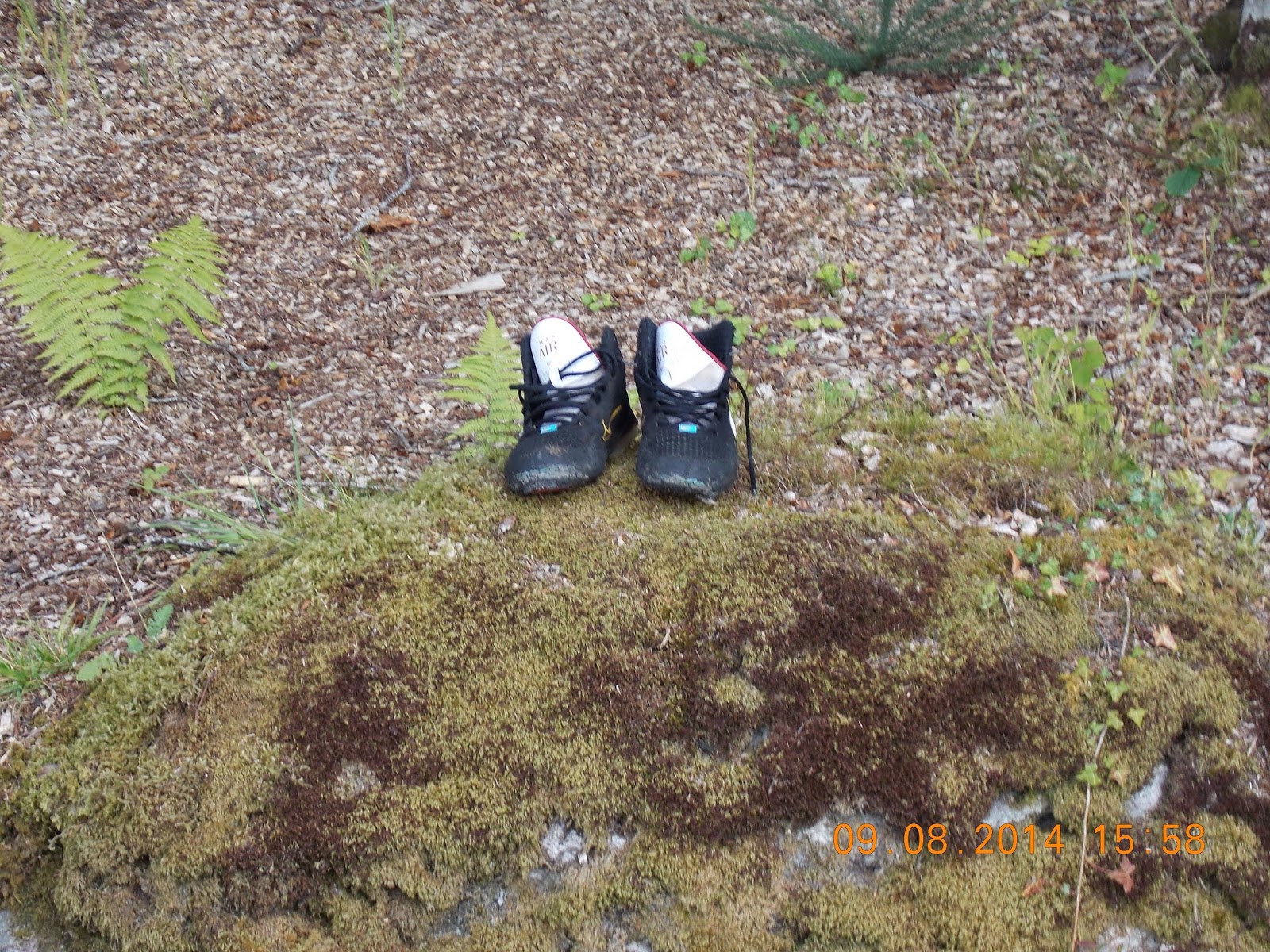 Walking along one of the beaches on the south side of Loch Ness, we came across this bivouac pictured below. We wondered if someone was down on their luck or was at the loch without a tent. The owner was nowhere to be seen and there was no sign of food  - just an empty bottle of whisky. 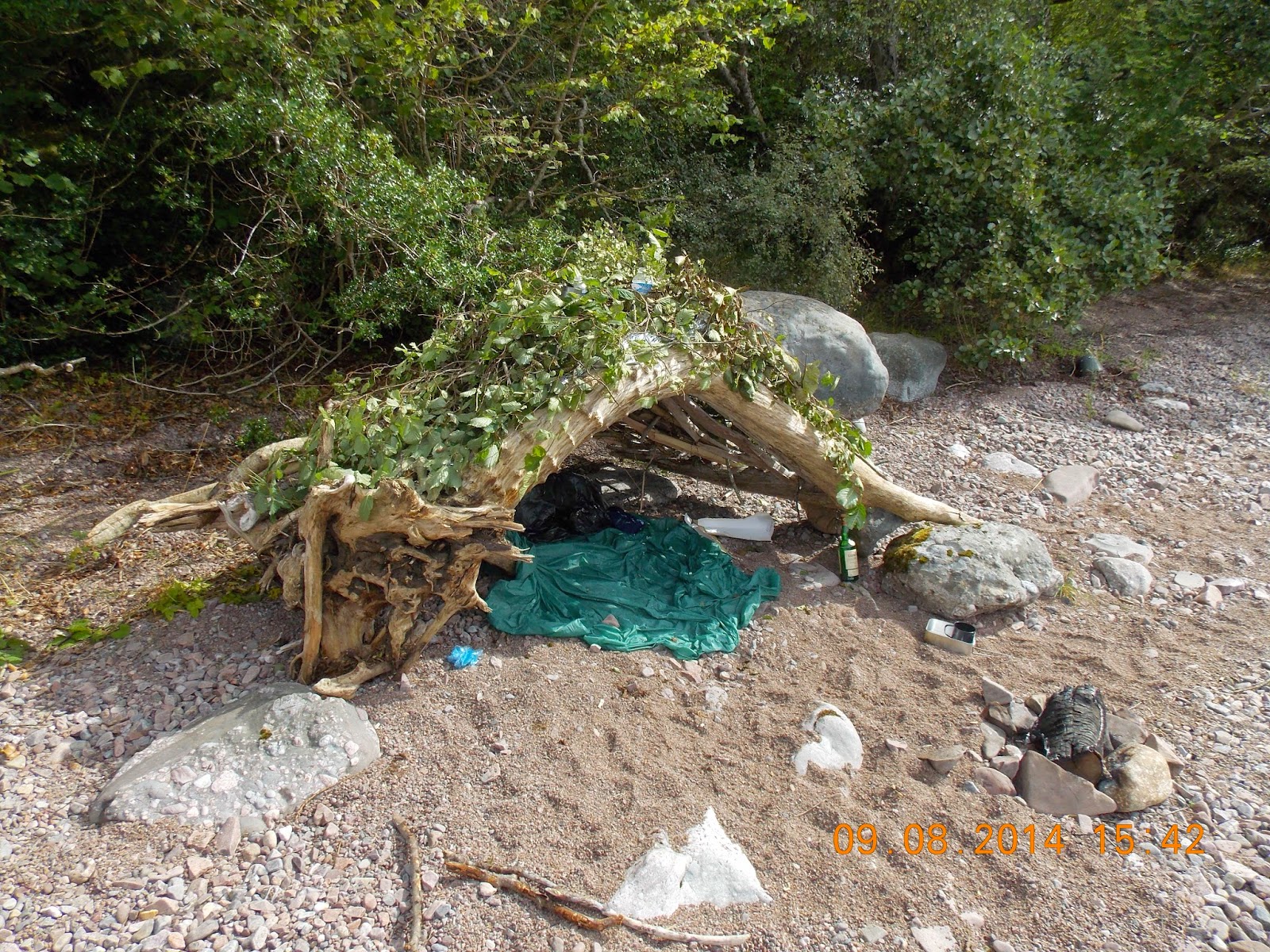 Beside it was a bottle filled with small stones with a plastic bag below. Presumably this was an improvised rainwater collection system. I left wondering what the purpose of that person's visit was and whether they had any tales to tell of their lonely nights sleeping on the shores of Loch Ness. 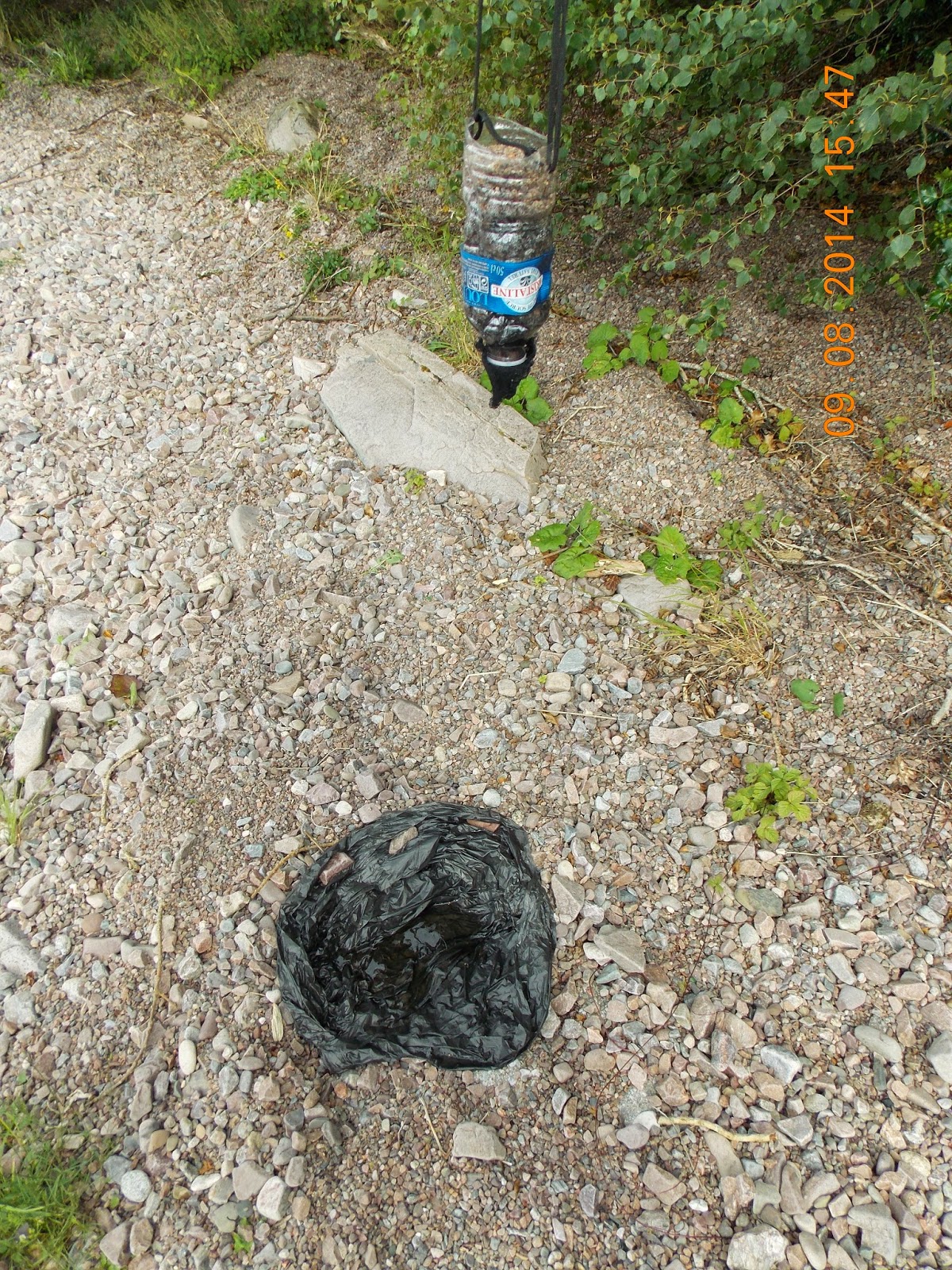 But it was not all negatives from the downpour. A visit to the Falls of Foyers presented a raging torrent which I had not witnessed before.

That video clip was taken from the upper viewing area beside the waterfall. However, attempting a shot from the lower area proved impossible as the spray being thrown up threatened to drench us quickly. A quick retreat from that spot was the best tactic. Below is a clip of the nearby River Farigaig in spate also providing an impressive display.

But this particular trip was not all about Loch Ness. On the suggestion of Doug, a blog regular, I took a detour to Loch Morar on the way home. Doug had not long been back from Loch Ness and Morar and felt that this was a loch that has not been as watched as it should be. Indeed, I read that Adrian Shine thought there was a better chance of a large creature in Loch Morar than Loch Ness. 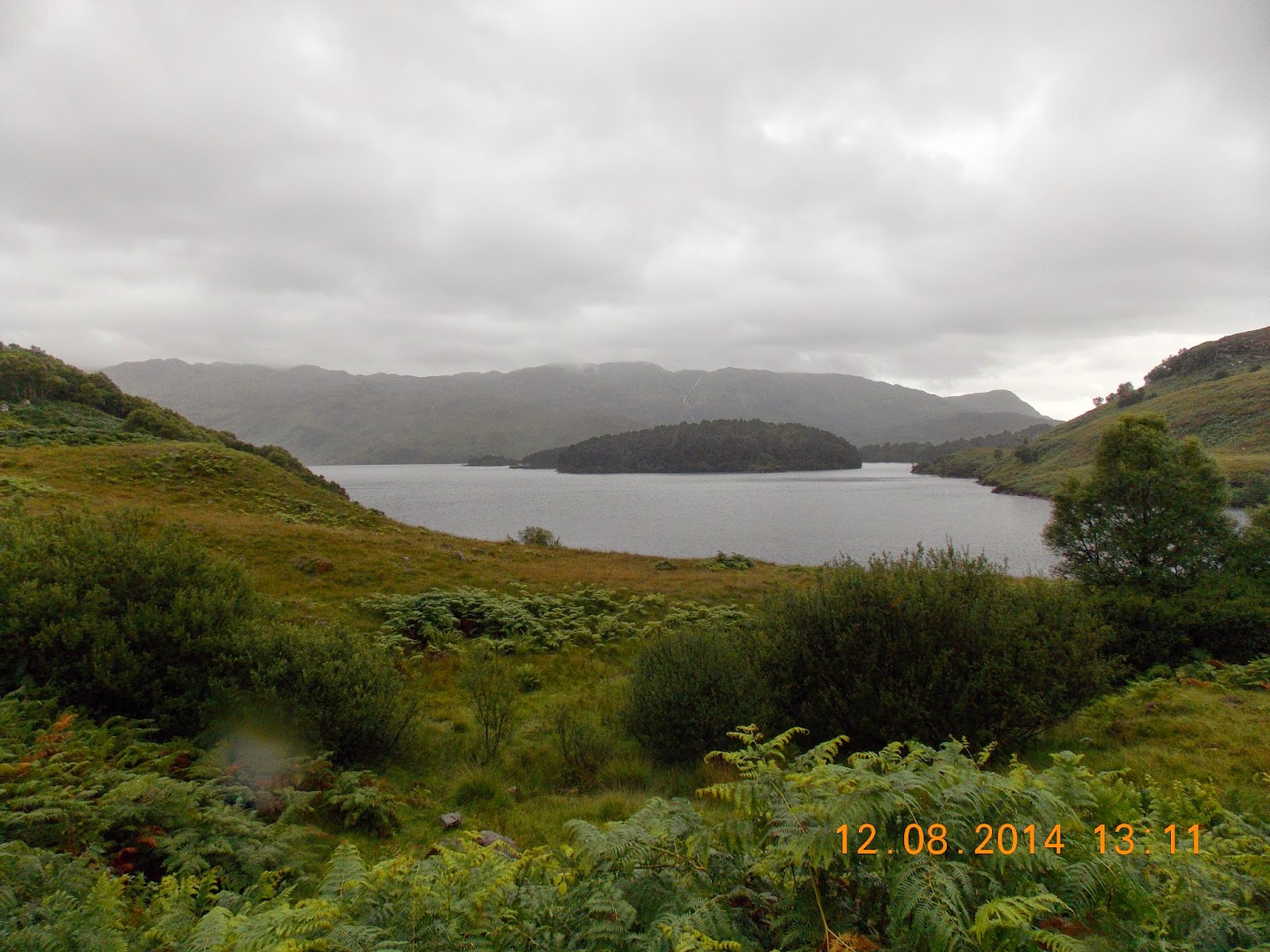 I have to confess that I have never been to Loch Morar in my long time here in Scotland, so it was finally time to remedy that omission. The main purpose of the trip was to install another trap camera as I had to get back home the same day. The loch is quite a contrast to Loch Ness and its tourist noise. At Loch Morar, it was a quiet single track road along the north of the loch with not much in the way of activity at all.

Having installed the camera, I visited the site of the Mhorag sighting I wrote on a while back. The video clip below is a quick survey of the area where the creature allegedly lumbered over a sandbar before disappearing into the loch.

So, as the tourist season winds down for another year and cryptozoological interests are pursued from home, it is hoped those silent trap cameras will snap something that doesn't quite look normal.