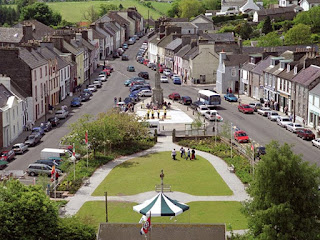 I am not long back from the small town of Wigtown in the Scottish county of Dumfries and Galloway in the south west of Scotland. Back in 1998 it was designated the National Book Town of Scotland and no wonder as it hosts over a dozen well stocked second hand bookshops around its small green square shown above. Around 1998, I had visited that other book town, Hay-on-Wye on the English-Welsh border and came home with several boxes of books.

This time I was more circumspect and selective as my collection has dropped from thousands down to less then a thousand (I think having not actually counted them). I had some tightly defined subjects on my shopping list and the Loch Ness Monster was one of them. Admittedly, I own about 68 of the 70 titles ever published (excluding kids books and fiction), so I did not expect to fill the box this time.

So over the weekend, I toured the bookshops with these subjects in mind, but it proved to be a disappointing exercise and the results were as follows. Only about a third of the shops had any Nessie books and those were the shops with the biggest stocks. The first one visited produced the best selection as shown below. Those were "The Loch Ness Story" by Nicholas Witchell, "Nessie, Seven Years in Search of the Monster" by Frank Searle and "The Loch Ness Monster - The Evidence" by Steuart Campbell. 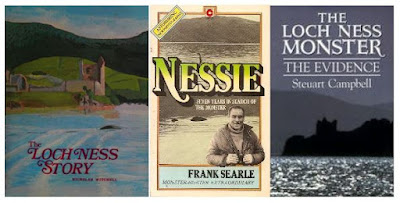 Witchell's book was the hardback first edition and was a snip at only five pounds, but I already owned it. As it turned out, I only bought Searle's book for one pound. Why buy that one by a proven faker? Well, actually, I was looking for such a copy, even though I also owned this, as I plan to write an article on Frank Searle and wanted to scan some text from his book. The trouble is scanning this book which is a thin glued spine could split it if forced flat onto a scanner bed. The solution is to buy another on the cheap and pull it apart!

Actually, for a man who claimed to have watched the loch more than anyone else, he does not have a lot to say compared to other monster hunters' books. It is a thin volume which was more likely written up quickly to cash in on the Nessie fever of the 1970s and probably also before the 1976 expose of Searle fully finished him off. How much of it is plagiarism is a matter of discussion. After that, it was onto the next book shop and that had two Nessie books in its Highlands section. One was a later paperback version of Witchell's book and the small tourist booklet produced by the Fort Augustus Abbey monks called "Loch Ness and its Monster", in this case, the 1967 reprint. 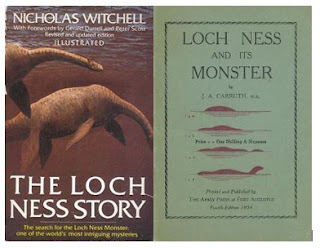 All the books so far were reasonably priced, probably cheaper than you will get on eBay and elsewhere. All the Nessie books were in the "Highlands" section and were in good condition. It was then onto the next bookshop which had the smallest stock of them all and their sole Nessie book was under the Folklore and Forteana section. It was the paperback version of Ronald Binns' first book from the 1980s. It was the most expensive book coming in at six pounds, I declined the offer and will say no more. It was then off to the bookshop which claimed to be the biggest secondhand bookshop in Scotland. 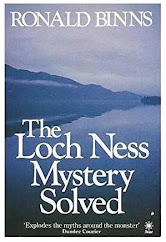 I had visited another large secondhand bookshop some months before, namely Leakey's of Inverness which is also a substantial bookshop. I compared the two in my mind's eye and thought that this one just shaded it for the title. Nevertheless, a search of the shelves revealed not one single title on the Loch Ness Monster in any form. Somewhat disappointed I enquired as to any titles out of sight. The response came up with the best one of all - "The Loch Ness Monster and Others" by Rupert T. Gould. 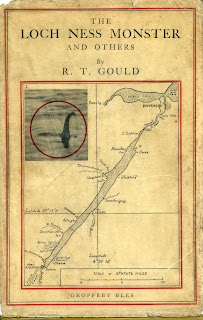 Unlike the picture above, the one he produced for me had no dustjacket and the listed price was a cool two hundred pounds. That is actually cheaper than some I have seen on eBay. The one I own cost about fifty pounds but that was purchased about twenty years ago. There was a reprint published in the 1970s which is a cheaper alternative for monster fans. However, this book had one particular claim to fame as it was owned by the author, Gavin Maxwell.

Maxwell authored the famous "Ring of Bright Water" but was also a fan of the Loch Ness Monster and indeed claimed a sighting of it back in 1945 as I recounted in this article. Indeed, his brother Eustace was directly involved in the hunt back in the 1960s. It then came to me later that Gavin Maxwell had actually been brought up in the area around Wigtown and some of his relatives still live in the Monreith area to this day. It would seem that some of them had sold off some of his collection to this book dealer. It would be natural to assume that having seen his monster in 1945, Maxwell bought the only available book on it at the time written by Gould.

I checked for anything unique, such as annotations by Maxwell and then handed back the book and that more or less ended the hunt. Five titles and nothing after the 1990s. Whether these titles are any less or more likely to be found than a random title with a similar publishing run is hard to say. I did not see anything published in recent years and I noted that there was not really anything else of a Fortean nature (e.g. UFOs or Bigfoot).

I left with Searle's book plus a 1930s Ordnance Survey map of the loch and a couple of booklets on the Great Glen. It was an enjoyable weekend browsing all those titles and I would recommend a trip to the town for any lovers of long shelves of old books.