I just wanted to mention that Karl Shuker has updated his bibliography on books devoted to the Loch Ness Monster. By way of introduction, he mentions the first book on Nessie by W. H. Lane. For further information on this book and its author, you can view my previous articles here and here. (regular reader Steve Plambeck will warm to Colonel Lane and his giant salamander theory.).

Karl's list is a bit different to mine in that he includes non-fiction juvenile and non-english books. I don't, but I do include books which have sizable sections on Nessie while Karl is only interested in books devoted to the Loch Ness Monster. Between us, I think we have covered all the bases on what has been published. Well, that is not quite true, there are always general books out there which have a chapter on the Loch Ness Monster, these may well exceed what we have listed.

One title most of all caught my eye and that is Karl's up and coming book called "Here's Nessie!" which is a compilation of his writings on the famous beastie.  I look forward to this and Paul Harrison's forthcoming biography on Frank Searle in the months ahead!

While I am here, I promised in that first book article to look at the second ever book on the Loch Ness Monster. This was a 16 page booklet entitled "The Mysterious Monster of Loch Ness" published by the Fort Augustus Abbey Press and authored by a W.D.Hamilton and J.Hughes.

Unlike Lane's first ever book on the Loch Ness Monster, I have never seen the second book on public sale. I personally had to obtain a photocopy of an original held in Edinburgh. If it ever turns up on eBay, I expect it to go for hundreds of pounds. The authors are not mentioned in the book itself, but rather from the library catalogue. However, Michael Turnbull's book "Abbey Boys" which relates the history of the Fort Augustus Abbey schools, mentions them as teachers during the 1930s. 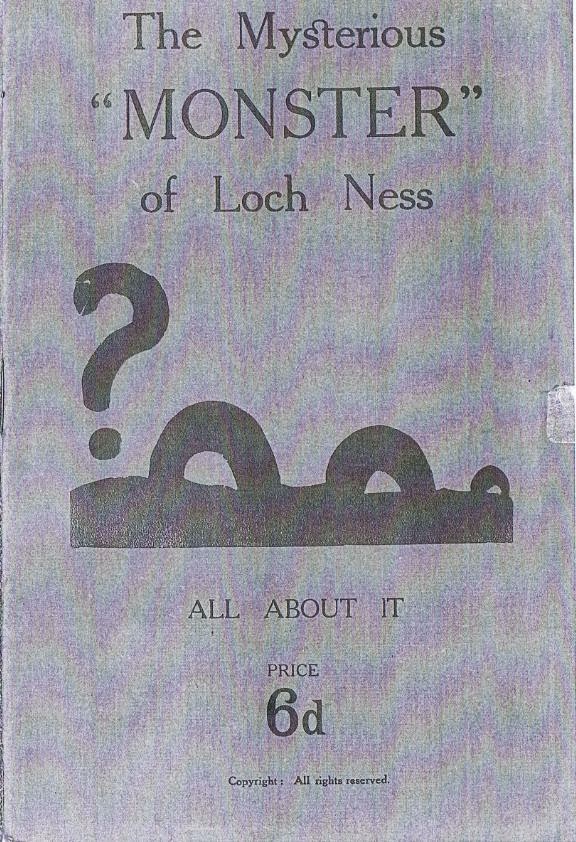 The book makes no mention of anything beyond May 1934, so I presume it was published around June 1934 putting it a few weeks ahead of Rupert Gould's better known book, "The Loch Ness Monster and Others". Proceeding in a chronological manner, the booklet goes through St.Columba, the Willie MacGruer land sighting around the First World War and the 1932 "crocodile" sighting in the River Ness.

A further note of interest states that the rumour of a released crocodile dates back to about 1913. I covered this persistent crocodile story in this article. Wetherell's infamous spoors are mentioned, but it is more interesting to note that this was contrasted with what was stated as the favoured theory of the locals which was of a "bearded eel".

The booklet goes a bit strange when it mentions strange toothmarks in sheep and deer carcasses but then states they were discovered to be those of a walrus! That in itself would be an unusual event as would be the tale of a famous deep-sea diver finding great honeycombed caverns in the gloom of the loch.

Having run off a few stories of other lake cryptids, the authors make no commitment as to what the creature may be and give a list of various candidates. The one thing that puzzles me from the list is what is a "megovia"?! The discourse ends with the two stories often given as the origins of the name of the loch.

PUBLIC NOTICE: Can "P.C." email me at lochnesskelpie@gmail.com about the painting they sent a comment to me about.

A Sighting Report from 2001 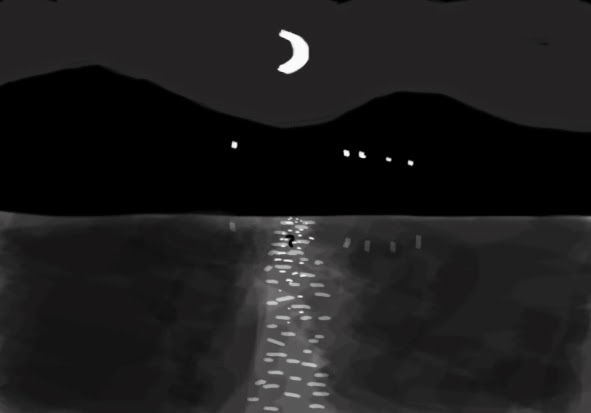 Reports of encounters with the Loch Ness Monster regularly appear on multimedia, even years after the event happened. Today, I highlight one for you which happened 13 years ago but was not made public until 2011 and now in 2014, hopefully it will go out to a wider audience.

Of course, the phrase "Encounter with the Loch Ness Monster" is a contentious series of words before one even gets into the details of the story. Not all reports that enter the public domain will be of the creature and, indeed, plenty of people will not hesitate to tell you that none of them involve a monster at all. Once again, I will offer my opinions, but let the readers judge.

I was at a recent meeting of the Edinburgh Fortean Society where Innes Smith gave a very good talk on the problems of believers, sceptics and the paranormal in the field of psychic research. That in itself was material enough for a few more articles, but it was what Innes said after that is relevant today.

Innes is Vice-President of the Scottish Society for Psychical Research and has been researching the paranormal since 1998. On the night of 1st May 2001, he found himself on the shores of Loch Ness as a result of a detour from a paranormal investigation at Loch Ashie. I encourage you to read his full and entertaining account here before I get into the nitty gritty.

In summary, Innes was staring out at the loch on a beach opposite Castle Urquhart, drinking coffee with his camera at the ready. To quote from his article:


It was then that I saw it. Her. It. Constantly in motion, something between the graceful rise of a swan’s neck out of water and a wiggly worm, an animated question mark (how apt) moving from  left to right. I estimated it to be about 6 feet out of water (1.8 metres to my metric chums) and it was framed brilliantly by the path of moonlight. My instant reaction was one of joy and I said out loud, ‘no way, no f*cking way‘, and then curiously my brain started to squeeze at least 20 seconds of thought into 0.2 of a second.

I reasoned that I was witnessing something that no-one would believe, and yet, here I was with a camera in my right hand (a cup of hot coffee was in my left). I also reasoned that even if I did take a photo, the chances of anything appearing on the film would be negligible (I had no telephoto lens and it was 1 a.m in the morning). However, the mere fact that I would not try, would, I reasoned, count against my credibility, so I decided to take some photos. I took five photographs. With a flash (it is an old automatic 35mm film camera). By the time my eyes had slightly readjusted to the darkness, I could see nothing. 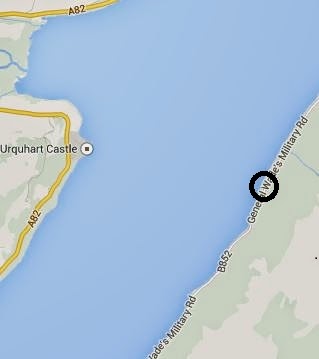 The rough location of the sighting is circled above. I must admit to a bit of jealousy here. I have been out several times at night by Loch Ness with the infra-red equipment trained on the dark waters. So far I have had no success. But amidst the flow of millions of travellers past Loch Ness over the years, some people will statistically be in the right place at the right time.

But for eeriness levels, this report is a notch above the others. One o' clock in the morning; a cold, lonely beach; a path of moonlight leading an individual to see a monster's neck writhing on the surface.

If indeed it was a monster's neck. The zoom in below shows a bit more of what Innes saw, though he seems convinced it was a hallucination, but why and how he cannot say.  The word "illusion" is more often used than "hallucination" when attempts are made to explain away monster sightings. Though some of the strained explanations that I have read must have required the witnesses to have feasted on magic mushroom soup for their lunch before their alleged encounters. 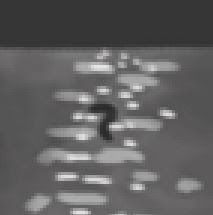 But Innes' story is a bit more unique. The usual daytime explanations seem even less adequate in a nighttime environment where birds have gone back to their nests and otters to their holts (I have run various trap cameras over the years, I get birds landing near the camera in daytime, but to date nothing at night). Logs will continue to drift at night with vertical branches protruding, but they don't writhe and twist and disappear from view so quickly.

Did that shimmering path of moonlight have an effect on the mind? I must confess I do not know, but I don't think the burden of proof lies with me to demonstrate that. After all, it is just moonlight reflecting of a surface of water. It does not sound like a big deal but I have put a note in my mind to coincide my next visit to the loch with a full moon and hope for a clear night. I am not expecting to trip out into a hallucination. Innes said it was a half moon, NASA's moon phase calendar confirms ths moon was in a first quarter phase on April 30th.


If it was the monster, I am sure Tony Shiels would approve of the "tentacle" reference and Ted Holiday would give a nod to the worm like metaphor. With reference to the previous plesiosaur article, I don't think any plesiosaur could contort its neck like that.

But what about the camera? It seems a bit of that "shock and awe" I have previously referred to kicked in to a degree. That doesn't always mean one is suddenly rooted to the spot, but it certainly initiates a mindset where one is not dotting ones "i"s and crossing ones "t"s in the usual methodical manner (and I say this knowing that Innes is a practised investigator of the unusual). As Innes says:

I legged it back up to the car. I told my colleague about what I’d seen. I know he didn’t believe me. I hardly believe myself*. And as a footnote: the photos?  A mysterious mist appeared on all the shots. How odd, there was no mist? Maybe I had captured something paranormal after all? …. and then I remembered what I had in my left hand. A cup of steaming hot coffee. I had succeeded in photographing steam from a cup of coffee – brilliantly.

I can sympathise with that, even a "seasoned" visitor like myself cannot be quite sure that I would be ready to seamlessly move into action with the video recorder or camera. Here are some more observations that Innes gave to me:

Innes suggests about 500m to the object and when he described the motion of the object it reminded me of one of those fast time lapse films you see of plants growing where they rise up and flail about in various directions, but in a general vertical direction.

Did Innes spot our famous resident? He is not sure and I am, of course, open to the possibility that he did.  The briefness of the sighting and the relatively long distance brings one into the percentages of sighting validity. It is simplistic to just say deer, bird or branch as the credibility of a sighting is inversely proportional to distance and obscuration but directly proportional to time (see link for more detail).

I regard Innes as a trustworthy and skilled investigator and so it is down to what could possibly have fooled him ... or not. When I come back from my next trip, I will have a hopefully better idea of moonlight observations of the loch.

PUBLIC NOTICE: Could P.C. get back to me about the painting you told me about. My email is lochnesskelpie@gmail.com