An Old Nessie Clipping with a Strange Subplot

Here's an old clipping found by Will, who is a regular reader of this blog as well as a Fortean researcher in his own right. It is taken from the Milwaukee (Wisconsin) Journal of May 7th 1937. 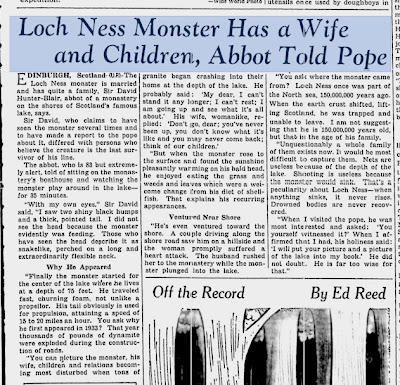 EDINBURGH Scotland -The Loch Ness monster is married and has quite a family, Sir David Hunter-Blair, abbot of a monastery on the shores of Scotland's famous lake, says.

Sir David, who claims to have seen the monster several times and to have made a report to the Pope about it, differed with persons who believe the creature is the last survivor of his line.

The abbot, who is 83 but extremely alert. told of sitting on the monastery's boathouse and watching the monster play around in the lake—for 35 minutes.

"With my own eyes." Sir David said, "I saw two shiny black humps and a thick, pointed tail. I did not see the head because the monster evidently was feeding. Those who have seen the head describe it as snakelike, perched on a long and extraordinarily flexible neck.

"Finally the monster started for the centre of the lake where he lives at a depth of 75 feet. He travelled fast, churning foam, not unlike a propeller. His tail obviously is used for propulsion, attaining a speed of 15 to 20 miles an hour. You ask why he first appeared in 1933? That year thousands of pounds of dynamite were exploded during the construction of roads.

You can picture the monster, his wife, children and relations becoming most disturbed when tons of granite began crashing into their home at the depth of the lake. He probably said : 'My dear, I can't stand it any longer: I can't rest; I am going up and see what it's all about.' His wife. womanlike, replied: 'Don't go, dear: you've never been up, you don't know what it's like and you may never come back: think of our children.'

But when the monster rose to the surface and found the sunshine pleasantly warming on his bald head, he enjoyed eating the grass and weeds and leaves which were a welcome change from his diet of shell-fish. That explains his recurring appearances.

"He's even ventured toward the shore. A couple driving along the shore road saw him on a hillside and the woman promptly suffered a heart attack. The husband rushed her to the monastery while the monster plunged into the lake.

"You ask where the monster came from? Loch Ness once was part of the North sea, 150,000,000 years ago. When the earth crust shifted, lifting Scotland, he was trapped and unable to leave. I am not suggesting that he is 150,000,000 years old, but that is the age of his family.

"Unquestionably a whole family of them exists now. It would he most difficult to capture them. Nets are useless because of the depth of the lake. Shooting Is useless because the monster would sink. That's a peculiarity about Loch Ness—when anything sinks, it never rises. Drowned bodies are never recovered.

"When I visited the pope, he was most interested and asked: "You yourself witnessed it?' When I affirmed that I had, his holiness said: I will put your picture and a picture of the lake into my book.' He did not doubt. He is far too wise for that."


Sir David is perhaps a bit tongue in cheek and some of his facts are wrong. Any creature would be trapped in Loch Ness no later than 10,000 years ago but then again, what the proto-Loch Ness contained before the last Ice Age commenced is a question even more shrouded in mystery.

Though his sighting is extremely long at 35 minutes, it is not unique. Nevertheless, we are disappointed that he did not run for his camera during this time. Perhaps monks do not carry cameras as part of their vow of poverty!

Also, I don't know why he thinks the monster inhabits the loch  "at a depth of 75 feet", I would like to know the reasoning behind that statement.

But the most mysterious piece (and which I had not noticed till I was typing this) was the account of the Loch Ness Monster being seen on land:

He's even ventured toward the shore. A couple driving along the shore road saw him on a hillside and the woman promptly suffered a heart attack. The husband rushed her to the monastery while the monster plunged into the lake.

I have no idea what case he is referring to here.  Do we have a new land sighting report here or is the Abbot becoming more associated with Costello than Fort Augustus? I'll give him the benefit of the doubt for we mentioned a land sighting already on this blog which was told by him and the link is here.

But in summary, that story concerned a monk who saw the monster emerge from some woods and enter the waters of the loch. Is this the same story or another one which Blair had picked up from the local raconteurs or monastic experts such as Cyril Dieckhoff? I had placed this monk's story on the flat woodlands beside the Abbey but this mysterious couple saw it on a hillside. Perhaps my suggested spot is wrong but they seem to be two separate stories. Using the clues in the short text, a shore road would most likely be the road on the busier west side approaching Fort Augustus. The road on the other side of Fort Augustus rapidly moves away from the loch and it is soon lost to view.

Secondly, there is plenty of the mentioned "hillside" on the west side of the loch which is now Forestry Commission land. That would imply the couple were heading south from Invermoriston to Fort Augustus when the lady in question saw the horrible sight of the creature moving amongst the trees and perhaps diving back into the loch in front or behind them. Her "heart attack" (or perhaps a panic attack) compelled her husband to drive straight onto the Abbey in the hope of medical facilities.

Well, perhaps, but it is a curious tale which I fear will never be resolved (unless eagle eyed readers have more to add!).