I mentioned recently that Torosay Castle was for sale and that meant an end to the Nessie exhibition there. I have previously posted photographs and comments here and here. So here are the other photographs I took when I visited a couple of years or so ago.
First here are some familiar images from the 1970s Academy of Applied Sciences expeditions. The famous "gargoyle" head can be seen as well as the "plesiosaur" body and the retouched flipper images. I was too young for the 1972 flipper picture but I remember the commotion caused by the 1975 pictures. Although by then a Nessie fan, when I first saw the gargoyle I was struck that this looked nothing like the descriptions that eyewitnesses had afforded to Nessie's head. So, I was always ambivalent about that picture. 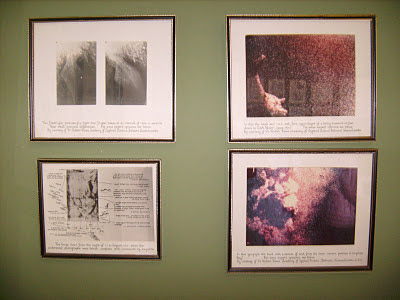 In the main room were large number of clippings that David James accumulated over the years and had been put into folders. Here is a selection of some stories which may evoke memories for our readers. 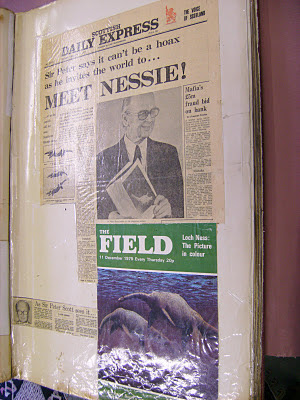 The man in the picture is Sir Peter Scott whose famous painting of two Nessies (also in the clipping) will soon be up for sale. 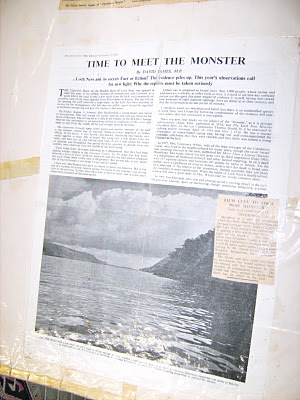 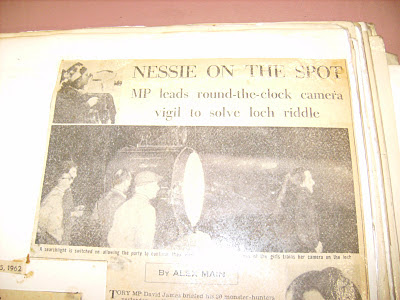 At one time the Loch Ness Investigation Bureau employed searchlights at night time on Loch Ness in the hope that a nocturnally-inclined Nessie may make more frequent appearances. That is an idea I am sympathetic too but the problem is where to point the searchlight! 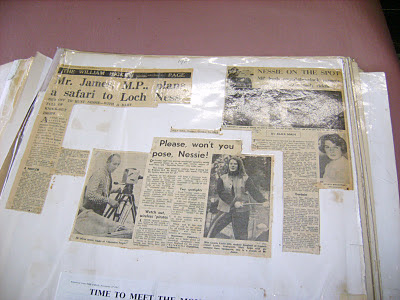 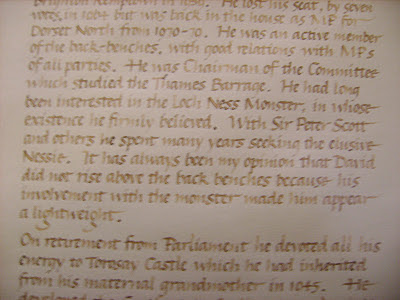 The writing above gave a brief opinion of his parliamentary career with a comment about how Loch Ness and the House of Commons could be at odds with each other. A political career or a search for a centuries-old mystery? Well, somebody had to stand up for Nessie in the government! It just so happened that mantle fell upon David James.

I have a quote attributed to David James which sums up the spirit of monster hunting. If anyone can tell me the source of this quote I would appreciate it:

"If any individual or group wants to pursue an independent line of research, all of the information of the bureau is at their disposal ... The Bureau is dedicated to identifying the unusual animal."

So we thank him for his efforts and zeal in pursuit of the mystery of Loch Ness and we finish this short piece appropriately with a fine portrait I saw of the man himself in his stately home. 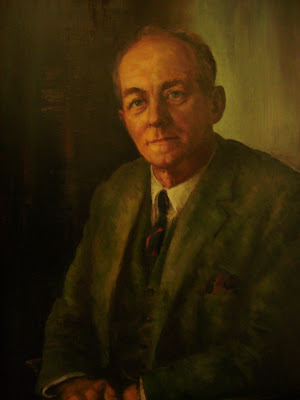