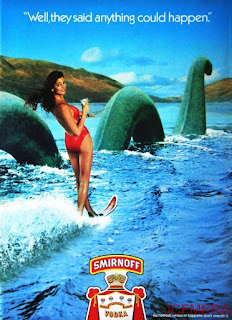 A fellow Nessie fan asked about this advert a while back and I did recall its striking image but could not find it anywhere. I have now, so here it is! It was published in 1978. 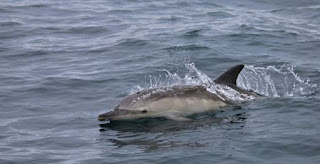 A recent BBC news item tells us that the populations of three dolphin species off the Scottish west coast are now at record levels since their surveys began in 1994. The key quote for me is this:


What has this to do with the Loch Ness Monster you may ask? Well, it has been one of my arguments that the decline in fish stocks around the Scottish coastline has also had an impact on the ecosystem of Loch Ness. Less fish means less Nessies and less Nessies means less sightings means less photographic opportunities.

The question of biomass in Loch Ness has always been a qualified affair to me. When the various fish counts were done in recent decades, there was always the chance that these figures were historic lows. In other words, arguing that there is not enough food in Loch Ness for a number of large predators, even though it could be challenged, could only ever apply to the loch at that point in time.

It did not address biomass in the 1930s when reports began to ramp up, let alone 1940s through to the 1960s before environmental changes began to impact the loch. Undoubtedly there were more fish stocks back in those days and the whole food question becomes opaque for those periods.

But the main point is that the eco-system appears to be reviving and the hope is that these enigmatic creatures will begin to increase in numbers and again break the surface of the loch.